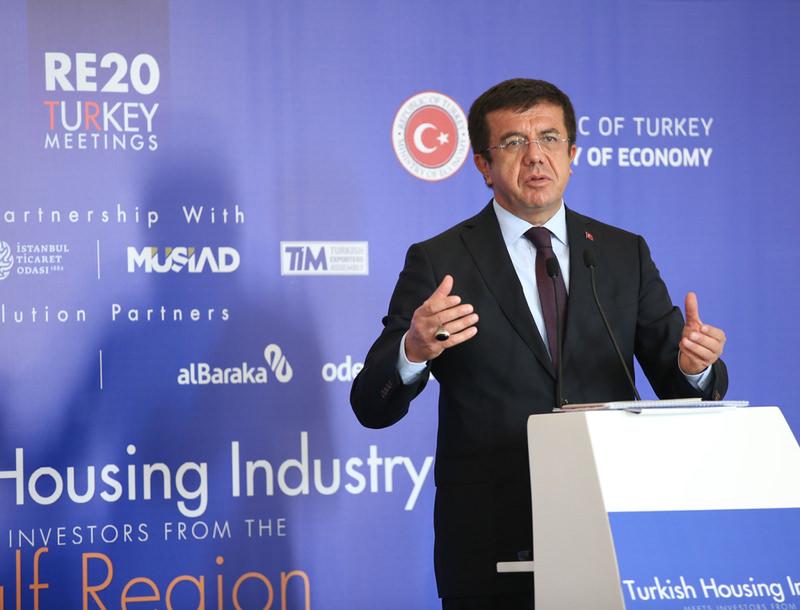 Commenting on the 3-year mid-term economic program that lowered its expectations for the annual growth rate, Interim Economy Minister Zeybekci said that the revised numbers underestimate the potential of the economy as well as neglecting the increasing effect of exports on growth

Interim Economy Minister Nihat Zeybekci said that growth estimates in the mid-term economic program are too modest, considering Turkey's potential. During a press meeting in Istanbul yesterday, Zeybekci said that the contribution of exports to yearly growth is underestimated in the program, bringing up positive foreign direct investment (FDI) data from previous years and the beneficial effect of decreasing commodity prices on Turkish trade. He claimed the revised data in the mid-term economic plan, released on Sunday, on the Turkish economy neglects this positive outlook.

According to the program released on Sunday, the government lowered growth expectations for the next three years. While growth for 2015 was expected to be 4 percent in the original version of the program, which was released last year, it decreased to 3 percent in the new version. Moreover, in 2014 the growth rate was estimated to hit 5 percent in 2016 and 2017; however, the revised mid-term economic program said that growth would be 4 percent in 2016 and 4.5 percent in 2017. The new version also includes estimated growth for 2018, which is 5 percent according to the government.

This week, the World Bank also revised the growth estimate for Turkey by increasing it to 3.2 percent from 3 percent. Commenting on the World Bank's revision, Zeybekci said he even expects annual growth to be higher, although the effect of exports on growth was negative in the second quarter. Zeybekci added that the contribution of exports to growth would be near zero in the third quarter, while it can turn positive in the fourth quarter. Also taking into account the fact that Turkey has the seventh fastest semi-annual growth in the world, Zeybekci underlined that according to the mid-term economic program, there is a negative effect by exports on annual growth in 2016 and 2017, whereas he expects growth to be above 5 percent starting from year-end data in 2016 and onwards.

In response to a question about declining world commodity prices, Zeybekci said this decline affects the foreign trade deficit in a positive way. Claiming that the Turkish economy is very close to achieving a trade balance, the economy minister further emphasized that the effect of fluctuations in Turkish lira/dollar parity will be diminished by the increasing use of the Turkish lira in foreign trade. Zeybekci also expressed his optimism by saying problems regarding the foreign trade deficit are about to be over.

During the meeting, he said that the increase in foreign investments in the housing sector increased ties both in terms of investment flows and trade, and the automotive sector, in which Turkey is one of the major exporters, can lead to more technological developments.