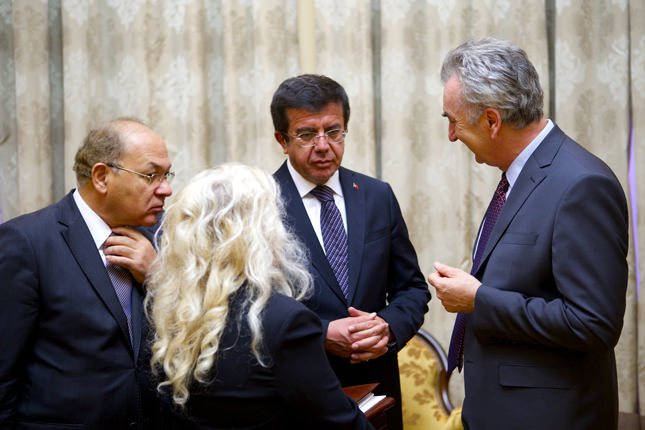 by Anadolu Agency
Oct 19, 2015 12:00 am
The Turkish bank Halkbank, one of the country's biggest banks and a state-run lender, on Monday opened its first branch in the Serbian capital Belgrade.
The opening ceremony of the branch was attended by Turkish Economy Minister Nihat Zeybekçi, Serbian Minister of Foreign and Domestic Trade Rasim Ljajic, the director general of Halkbank Mustafa Aydın and director of Halkbank in Serbia, Kenan Bozkurt, Turkey's Ambassador to Serbia Mehmet Kemal Bozay, as well as other guests.
Speaking at the ceremony Zeybekçi said that Turkey's Halkbank has an important role in the economic and commercial relations between Turkey and Serbia.
"We as Turkey support Turkish companies to invest in Serbia. Turkey's Halkbank will carry out an important mission in Serbia as it does in Turkey," said Zeybekçi.
Meanwhile, Aydın said that they are not planning to be the biggest bank, but they are definitely planning to be among the most powerful banks in the region.
Halkbank bought a 76.76 percent stake in Serbia's local lender, Cacanska Banka on May 20, 2015.
Halkbank is the second-largest state lender after Ziraat Bank in Turkey with 900 branches and 19,000 employees.
In 2014, the bank's assets were valued at over 150 billion Turkish lira ($60 billion) and its net profit reached 2.2 billion Turkish lira ($850 million).
Nearly half of Halkbank's shares are traded on Turkey's main stock exchange, Borsa Istanbul.
Last Update: Oct 19, 2015 5:54 pm