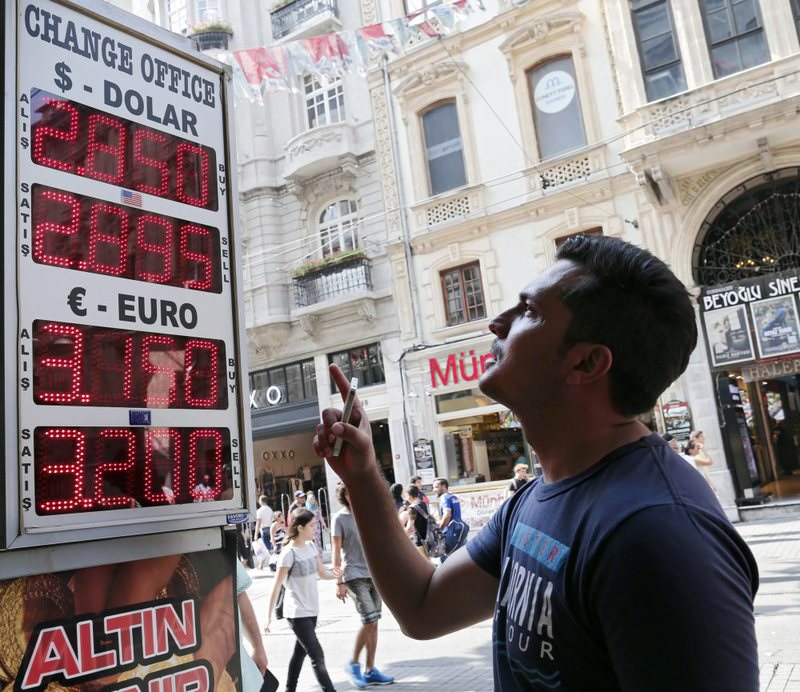 After signals from the European Central Bank to continue with expansionary policies, the euro weakened against major currencies whereas the Lira / dollar parity experienced a level below 2.86 along with rises in stock exchanges

Following the European Central Bank's (ECB) signal for further monetary expansion on Thursday, the euro began losing value against the group of 16 major currencies and experienced its lowest level in two months. The euro-dollar parity also decreased to 1.11. Turkish lira-dollar parity decreased to 2.86 on Friday morning due to the effect of the increase in risk appetite for emerging market currencies. Analysts say if the lira-dollar parity manages to remain below 2.87 for a considerable time, it could even stabilize around 2.85. On Friday, the parity dropped to 2.8598, which is the lowest level in the past two months. Following the appreciation of the lira, interim Economy Minister Nihat Zeybekci said it was merely speculation that the lira would weaken more than the currencies of other emerging markets against the dollar, and that he expects the lira to strengthen even more and lira-dollar parity to fall even further.

On Thursday, ECB President Mario Draghi reported that policymakers will once again evaluate the volume and duration of the monetary expansion. He added that the bond purchases, initially planned to end in September 2016, will continue until that the inflationary effect of the implemented policies on overall prices are sustainable around the targeted level of 2 percent per annum. Draghi also said policymakers are planning to further decrease bond interest rates.

In light of these developments, although the ECB further preserved its wait and see approach by holding interest rates at current levels, Draghi's remarks about weakening inflation expectations were sufficient to arouse global investors' risk appetite. It seems that as investors expected the ECB to take more concrete steps to stimulate demand in order to ensure a more sustainable inflationary economic environment, stock markets all around the world began increasing with investors' becoming more optimistic because of ECB plans for further expansionary movements.

The Borsa Istanbul's BIST 100 index started Friday morning at a level of around 81,000. Analysts claim that if this level surpasses 81,500, it could even close at 83,500. The optimism created by the ECB has manifested in other stock markets as well. U.S. stock markets increased almost 2 percent and European stock markets rose more than 2 percent, along with the increases in the profitability of the companies in the United States and Europe. Backed by the increase in Japan's Purchasing Managers' Index and the rise in South Korea's annual growth rate, the news from Europe helped stock markets in East Asian countries increase at between 0.5 and 1 percent.

Meanwhile, gold per ounce rose above $1,178 yesterday. Gold appreciated because of the ECB's signals about further monetary policy expansion and investors' waiting for the U.S. Federal Reserve's (Fed) meeting to be held next week to get a right sense of the timing of an interest rate hike.

While the markets are paying particular attention to the Fed's meeting next week, economist and Daily Sabah columnist Taha Meli Arvas said the probability that the Fed will increase interest rates is almost zero, considering the current global economic environment. He added that he agrees with the Federal Reserve Bank of San Francisco study that says when the natural rate of interest - the actual interest rate around which short-term interest rates fluctuate - in the U.S. is below zero, the nature of the economy actually requires a negative interest rate of minus 2.1 percent to 2.5 percent rather than a rise in rates. Arvas also said this means markets are already aware that the Fed will hold interest rates as they are, and there will not be a contraction in domestic demand manipulated by the Fed, meaning this is the basic reason why U.S. stock markets increase. Furthermore, Arvas commented on the Turkish economy, saying that due to the Fed's stable approach, the effect of the domestic events on the parity has started to be more dominant on the value of the Turkish lira. He added that in addition the effect of expansionary monetary policy in the eurozone, which may increase the demand for the lira in the future with some capital inflows, the appreciation of the lira can also be a reflection of the optimism about an increase in Turkey's political stability, as a possibility for the Nov. 1 snap elections is the Justice and Development Party (AK Party) coming back to power as the sole party.
RELATED TOPICS