Never-ending debt talks for Greece to begin once again 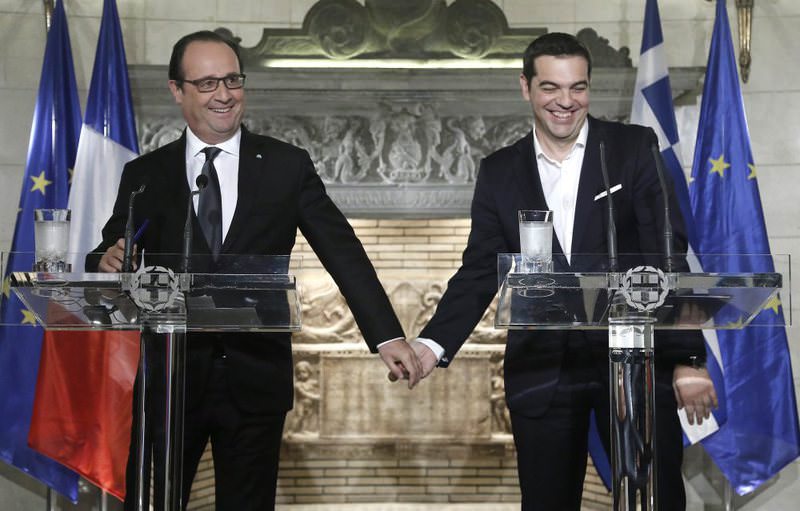 by Associated Press Oct 24, 2015 12:00 am
French President Francois Hollande on Friday backed a Greek request to start negotiations with bailout lenders by the end of the year for better debt repayment terms. Hollande, on the second day of a visit to Greece, said the talks should start after bailout inspectors complete a review of Greece's reforms progress, which is expected to start next month and last several weeks.

Greece's economy is expected to weaken after briefly emerging from a six-year downturn, pushing its projected national debt to above 190 percent of annual GDP in 2016. "Of course Greece must honor its commitments. But they are not contesting that," Hollande said after talks with left-wing Greek Prime Minister Alexis Tsipras. "What Greece is asking for is flexibility that's understandable," he said. "Of course when the (bailout) review is completed, the renegotiation for the debt should begin, to lighten the debt burden."

The French president traveled with Finance Minister Michel Sapin and several other members of his cabinet. They discussed Europe's refugee crisis and the ongoing civil war in Syria, and signed agreements to boost support by French experts for reforms to improve the Greek state administration.

Hollande was in Athens as his country mourned the death of 42 people in a bus crash, and said he was in frequent contact with ministers before returning to Paris later Friday. France played a key role in helping hammer out the summer deal between Greece and eurozone countries for a major third bailout, after talks came to the brink of collapse and Greece faced the possibility of an exit from the euro.

A major new round of austerity measures, demanded in return for the agreement, has angered unions who have called a general strike on Nov. 12. Ongoing talks with bailout lenders have failed to end disagreement on how to tackle a growing number of bad loans threatening the country's banking system.

On Friday, Tsipras promised to honor bailout commitments "to the letter." But he claimed "extreme neoliberal" supporters in Europe a thinly veiled reference to fiscal hawks in the German finance ministry were trying to undermine the deal. "It's one thing to honor our commitments and agreements, and another to consider Greece not to be an equal partner but a convict serving a sentence," he said. "We are equal partners, not convicts."
RELATED TOPICS