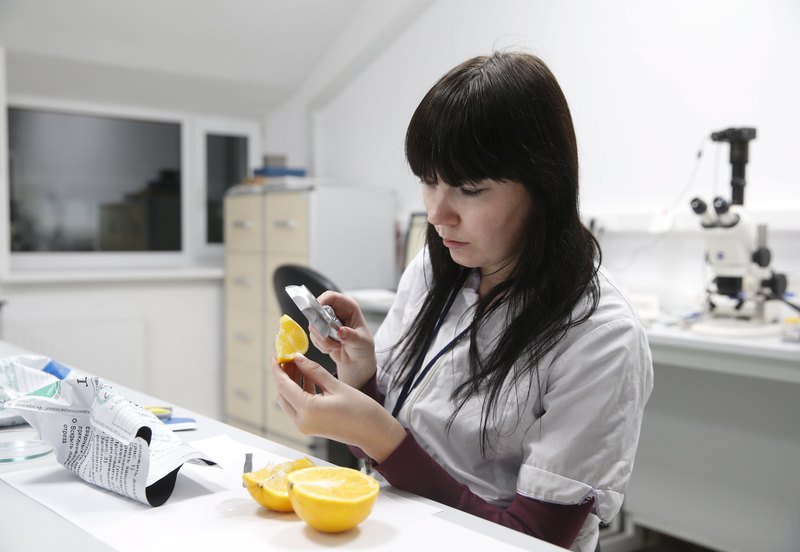 Russia took a step to assure its trade partners by joining the World Trade Organization (WTO) in 2012. As a member of the WTO, Russia has rules to obey; however, the country continues to find alternative ways to become the most unreliable trade partner of the world. Since the Russian Su-24 fighter was downed by Turkey for violating its airspace on Tuesday, reports and complaints regarding Russia's implementation of non-reciprocal practices in trade ties and customs control have rapidly surfaced.

Following the downing of a Russian military jet by the Turkish Armed Forces, and having detained Turkish businesspeople as well as not letting Turkish trucks cross the border, Moscow has now started to not let Turkish trade vessels approach Russian ports. A Ro-Ro-type ship, which departed from Samsun in northern Turkey, was reportedly not allowed to approach the Novorossiysk Port. It was also reported that the ship is being kept in open waters. Still, Russia has not clearly declared that it will impose sanctions over Turkish goods, but will implement full inspection, which keeps the procedure legal. This, in turn, triggered the Transport, Maritime and Communication Ministry to take action. The ministry sent a written document to the Foreign Affairs Ministry offering to respond in the same way by relying on the mutuality principle. It has been reported that the Foreign Affairs Ministry has been moldering over the issue. If the ministry accepts the offer, Turkey may keep Russian trade vehicles at the border and deny them entry into the country.

The furious Russian government is looking for economic revenge against Turkey. On the other hand, experiencing trouble in bilateral trade relations has become a habit for Russia. Last week, Western leaders agreed to extend sanctions imposed on Russia for the Ukraine conflict by six months until July of next year, according to a Reuters's story depending on information obtained from a senior European diplomat. In addition, Europe searches for alternative ways to cover its natural gas demand to decrease its dependency on Russian energy. Furthermore, the Ukrainian Ministry of Economic Development and Trade this week filed another lawsuit against the Russian Federation with the WTO, Ukraine Trade Representative Nataliya Mykolska wrote on Facebook.

The Russian economy shrank 2.2 percent, 4.6 percent and 4.1 percent in the first, second and third quarters of this year, respectively, compared to the previous year. Political conflicts that the country has experienced with its trade partners have dramatically damaged its economy.

Food, Agriculture and Livestock Minister Faruk Çelik announced that the ministry has not received any embargo decision from Russia to be imposed on Turkish exports such as white meat, wet fruits and vegetables. Çelik stressed that Turkish agricultural exports to Russia are worth $1.270 million per year, adding that Turkish imports from Russia are worth $2.850 million per year. Commenting on this, Çelik said: "Apparently, by the sanctions to be imposed, not only will Turkish farmers be affected, but also Russian farmers and producers too. Therefore, we believe that it is necessary that we approach the issue more calmly, as it would better serve both parties' interests to end the crisis arising from the warplane that was shot down. I believe that the emotional responses to the issue will not bring any benefit to bilateral relations."

According to a statement released on the Russian government's website, Russian Prime Minister Dmitry Medvedev said: "This damage will be difficult to repair. The direct consequences are likely to be the renunciation of a number of important joint projects and the loss of Turkish companies' positions in the Russian market." Two major projects on the agenda are the Turkish Stream natural gas pipeline project and the Akkuyu nuclear power plant. Turkey's first nuclear power plant is being constructed by Russia in the southern province of Mersin, which experts believe that Russia cannot simply stop building. The Turkish Stream, on the other hand, which was planned to carry Russian gas to Europe via the Turkish-Greek border, could be in danger.

On Thursday, President Recep Tayyip Erdoğan said he could not get an answer from his Russian counterpart, Vladimir Putin, when he called after the incident. On Friday, the Kremlin confirmed Erdoğan's statement and rejected Erdoğan's offer to meet face-to-face with Putin during the upcoming climate change meeting in Paris both leaders are scheduled to attend on Nov. 30.

While Turkish officials attempt to ease the tensions by emphasizing that Russia is not an enemy of Turkey and Turkey's right to protect its borders has to be respected, Russia's aggression affects trade ties. The Russian and Turkish governments did not allow political issues to bar economic benefits during the Armenian conflict. While the two countries faced serious clashes on the 1915 incidents between Armenians and Turks, political factors have failed to interrupt negotiations. At the end of April, Putin attended an event in Armenia's capital, Yerevan, to commemorate the 1915 events, and Medvedev sent a telegram to his Armenian counterpart, Hovik Abrahamyan, where he referred to the 1915 incidents as "genocide." Erdoğan condemned Putin's attendance, and said: "I invite the countries that make genocide claims to clean up the bloody stains on their own history." Regardless, the tension was unable to restrict trade relations and joint projects. But the downing of the Russian military jet will have a negative effect on trade for a while, according to experts. At the end of the day, businesspeople and economies, and hence citizens, will be the ones most negatively affected.
Last Update: February 02, 2020 19:07