Turkey will wait before responding to Russian economic sanctions 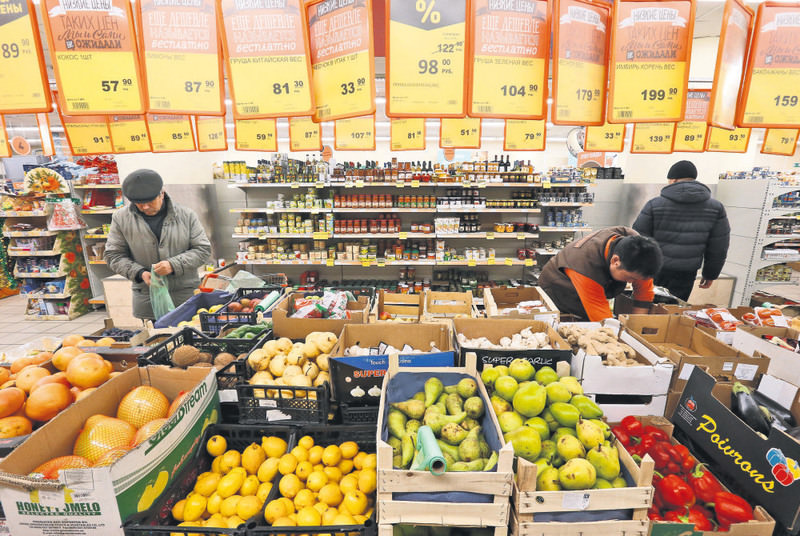 Fruits, vegetables and other products are seen on sale at a grocery store of the food retailer Dixy in Moscow. Russia bans Turkish food exports to revenge downed warplane by Turkey last week.
by Daily Sabah Dec 02, 2015 12:00 am

While Russia widens the economic sanctions in response to imposed on Turkey the downed jet, President Erdoğan said that Turkey will not act ‘emotionally' and will wait to respond in accordance with the mutuality law

President Recep Tayyip Erdoğan said that Turkey will respond in a reasonable manner to the economic sanctions Russia imposed after Turkey shot down a Russian warplane for violating its airspace last week.

Moscow cancelled all private flights to Turkey and requested travel agencies to cancel scheduled tours and holiday packages to Turkey. Russia has already banned certain Turkish exports. Moscow is now contemplating announcing a new round of sanctions to further reduce economic ties between the two countries.While attending the Climate Summit in Paris, Erdoğan noted that Turkey will be patient about whether it will impose any sanctions against Russia, as it first wants to see what further steps Russia takes against Turkey. "We will not act in haste nor be emotional," added Erdoğan.

On whether he will be holding a meeting with Russian President Vladimir Putin in Paris, Erdoğan stated that Turkey has expressed its good intentions and requested a meeting and is now waiting for a reply.

After the incident, Erdoğan had offered to meet the Russian President in Paris for a one-on-one discussion; however, the Kremlin announced that Putin was not willing to hold any meetings.

Meanwhile, Turkish business community leaders warn that the situation will pose economic risks to both countries, putting $30 billion in annual trade volume on the line. Turkish Exporters' Assembly (TİM) head Mehmet Büyükekşi said yesterday that Russia should not mix trade with politics. "Limiting trade in such a way is not a correct step. Commerce and politics should operate independently. Politics can recover quickly, as early as tomorrow, but trade cannot come back in one day," Büyükekşi said. Büyükekşi added that Turkey and Russia should try to keep losses related to the dispute to a minimum. "Exporters in the two countries should work to create a win-win situation in this context," he said.

According to the Turkish daily Yeni Şafak, Foreign Minister Mevlüt Çavuşoğlu explained the situation to his Azeri counterpart Elmar Memmedyarov, who later discussed it with Aliyev. Aliyev showed his support for Turkish exporters with plans to ease visa procedures and not impose penalties on trucks which do not have transit documents.

Thanking Aliyev, Turkey's International Transporters Association (UND) requested that the route, which connects Turkey to Central Asia and the Caucasus, become permanent. While the route is shorter, the transit prices are higher. More than 45,000 trucks reach Central Asia via Iran annually, while 6,000 trucks travel through Russia and 5,000 trucks pass through Azerbaijan and the Caspian Sea. The Azerbaijan-Caspian Sea route has a capacity to accept 25,000 trucks per year. According to Şener, if the Azeri government offers a discount to these Turkish trucks, Turkish exporters may use it to full capacity.
Last Update: Dec 02, 2015 2:20 am
RELATED TOPICS