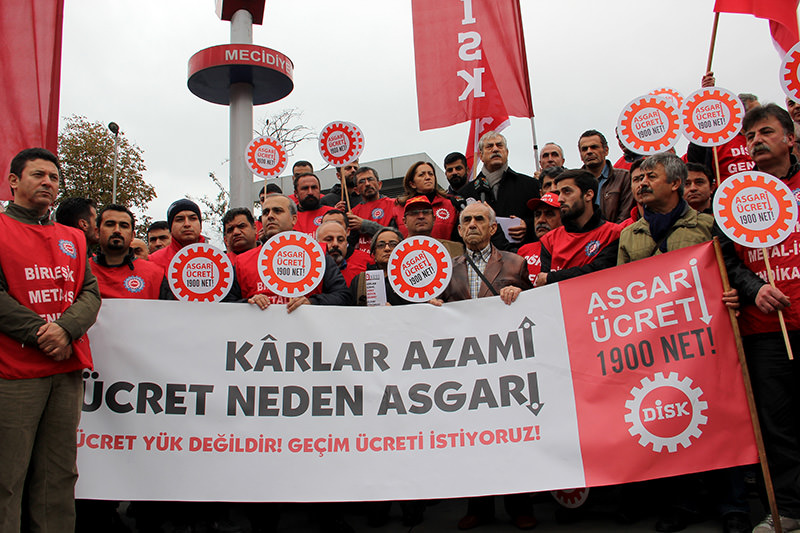 by Anadolu Agency Dec 08, 2015 12:00 am
As Turkish workers get ready for a minimum-wage rise, some labor unions are insisting that the government increase 'the promised' amount.

A demonstration of around 100 activists in central Istanbul on Tuesday heard calls from the Confederation of Progressive Trade Unions of Turkey (DİSK) for a monthly amount of 1,900 Turkish liras, or around $650.

Almost all major parties promised a minimum wage hike ahead of November 1 snap elections, ranging from TL 1,300 to TL 2,000.

According to the latest data from the Turkish Central Bank, around 12 percent of the workforce is on minimum wage.

However, during a television interview with CNN Türk on Monday, Finance Minister Mehmet Şimşek said government plans to increase the minimum wage would go ahead "as promised".

The AK Party had committed itself to raising the monthly salary ahead of the country's Nov. 1 early general election.

However, the Istanbul-based Independent Industrialists' and Businessmen's Association (MÜSİAD) has already signaled its fears over a rise in the monthly amount.

Late last month, Turkish business leaders warned that the wage hike would increase the "shadow economy" and that companies would have to lay off many employees.

The minimum wage in Turkey has been determined by the country's Minimum Wage Determination Commission. The body is comprised of 15 members; five each from the government, labor unions and employers.
Last Update: Dec 08, 2015 6:12 pm
RELATED TOPICS