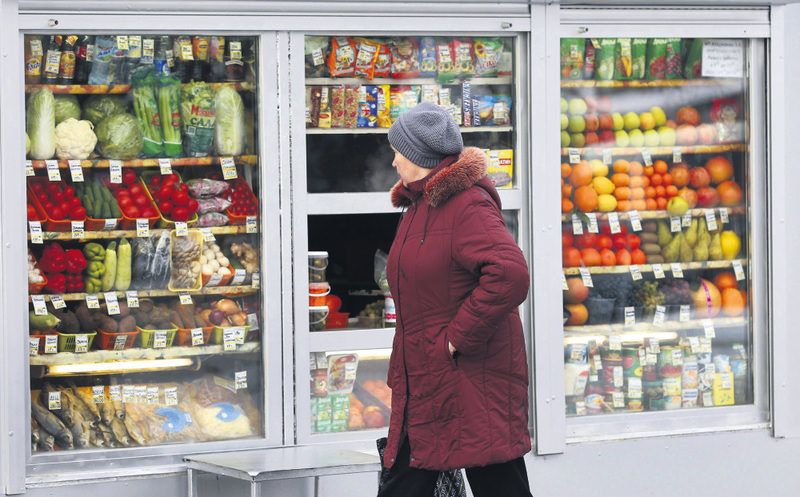 In response to the heavy economic measures taken by Russia following the downing of a Russian warplane in November, Prime Minister Ahmet Davutoğlu is expected to announce the measures Turkey will take against Russia today. These measures are expected to include identifying alternative markets for Turkish exporters, alleviating the tax burden on producers and imposing tighter inspections on Russian goods at customs. The primary aim of these new measures will be to offset the losses incurred by Turkish producers due to Russia's current stance.

Several ministries evaluated the handling of the crisis under the leadership of Şimşek and examined the possible scenarios regarding the effects the continued sanctions would have on Turkey's imports and exports. The new measures are expected to order back perishable goods such as fruits and vegetables kept by Russia at customs in order to ensure these products enter the market.

Instead of keeping goods coming from Russia at customs like Russia did for Turkish goods, the government plans to impose heavier regulations on Russian goods. There will be new practices enacted such as the exhaustive counting and examination of the goods. This means the regular transactions carried out at customs will be more time-consuming for Russian goods.

Moreover, if Russia takes further steps to impose more sanctions, goods such as fertilizers and sunflowers will be purchased from other countries. Also, as to ensure Turks are getting high quality white meat produce, the Iraqi market is seen as a viable alternative.

There will also be measures taken to protect Turkish producers affected negatively by the sanctions. The producers, whose goods were wasted, will be supported by the government in identifying new markets. There will be other measures taken aimed at alleviating the tax burdens for Turkish importers, as well as new subsidies introduced.

In addition, a new lane will be opened for trucks carrying perishable goods so that they can be quickly transported from one country to another.

Energy-dependency on Russia to be ended in 2.5 years

The government is pressing to end its energy dependency on Russia, whose stance after the crisis stemming from Turkey downing one of its military jet's does not provide any kind of assurance in terms of economic cooperation by expediting the Trans-Anatolian Natural Gas Pipeline (TANAP) project, which aims to carry Azeri natural gas to the European market via Georgia and Turkey. Furthermore, the government will prioritize nuclear energy projects and within the next two to two-and-a-half years, the aim is to increase the variety of the energy package, meaning that it's dependency on Russia - which is the biggest exporter of gas to Turkey - will come to an end by 2018 at the latest.

While energy cooperation with Russia has been ongoing since the 1990s and both sides have cooperated on mega projects, such as the Akkuyu Nuclear Power Plant and the Turkish Stream pipeline project, Russia's involvement in the Syrian crisis and Russia's border violation has caused Turkey to re-evaluate its energy policies and discuss the options for diversifying its energy sources.

While the existing energy agreements with Russia continue to function normally, Turkey is set to increase its liquidated natural gas (LNG) investments and storage capacity for LNG it receives from Algeria, Nigeria and Qatar. Along with the natural gas to be obtained from Azerbaijan through the TANAP for the long-term, natural gas agreements are to be signed with Turkmenistan and Kazakhstan for the short-term. Moreover, Turkey remains the most eligible country to carry the new reserves found in the eastern Mediterranean region to Europe.

Turkey had already aimed to ensure that 30 percent of the electricity production is obtained from renewable energy resources by 2023, and after the Russian crisis provided incentives for coal as well as wind power, expanding hydroelectricity and solar energy is now being considered as well. While Russia will continue the construction of the first nuclear plant in Akkuyu, work on the second nuclear plant to be constructed by the Japanese in Sinop and the third in İğneada - which, along with Japanese firms, Chinese and American firms are also interested - will be expedited.

Deputy PM: Turkey will lose $9B in worst-case scenario

The deputy prime minister in charge of economy, Mehmet Şimşek, appeared on NTV, a Turkish TV channel, and discussed the three main deterrents that will be taken if Russia is not willing to overcome the crisis through dialogue. Furthermore, he said that the tension would cost up to $9 billion in the worst-case scenario.

Stressing that Turkey sees Russia as an important partner and does not want to further escalate tensions, Şimşek said they are now working on precautions that may be taken to minimize the damage and reduce Turkey's energy dependency on Russia. Şimşek has submitted the precautions to Prime Minister Ahmet Davutoğlu. "We do not want to escalate the tension. The number of tourists from Russia decreased by 603,000 people; construction services are being delayed. The tensions effect on GDP [gross domestic product] might be 0.3-0.4 percent. Hopefully, we will overcome the crisis through dialogue," Şimşek added.

If Russia temporarily reduced food prices, unprocessed food products might push inflation up. Şimşek said they are about to take structural precautions in order to prevent such an effect. He also highlighted the importance of addressing structural issues in the agriculture sector, as product prices increase incrementally when they are reaching consumers and since the scale is relatively small in the sector.

The jet crisis between Turkey and Russia has worsened conditions for Russia's Aeroflot Airlines, which has been experiencing hard times since the incident. It is claimed that the airline company may cancel its flights due to the unsatisfactory number of passengers. Aeroflot Airlines has recently resorted to combining flights between Turkey and Russia in the wake of the crisis stemming from Turkey's downing of a Russian fighter jet.

After the cancellation of charter flights to Turkey in late November as a reaction to downing the fighter jet, Aeroflot Airlines canceled flight SU-2137, which was scheduled to depart from Istanbul to Moscow. According to information from some Russian professionals working at the airline company, since the number of passengers traveling in the morning is low, the voyage was combined with the 2:05 p.m. flight. Turkish Airlines (THY), which has a number of daily and weekly flights to Russia, has not been affected by the crisis yet.

Tourism chief tells Russians they do not need beach holidays

Russia's tourism chief prompted a wave of anger on Monday by claiming there is no need for people to go abroad on beach holidays, after Moscow barred travel to Turkey and Egypt. In an interview with government newspaper Rossiiskaya Gazeta, the head of Russia's tourism agency Oleg Safonov said that "the need for beaches and the sea is very much a stereotype of recent years, which we already accept as our own opinion."

"Our forefathers, even the wealthy, did not go en masse to foreign seas," he added. Russians often prefer to go on holiday in winter to escape six long months of plunging temperatures, short gloomy days and snow. This year, they are unable to visit their top two destinations, Turkey and Egypt, due to official travel warnings and bars on flights to Egypt and sales of package tours to Turkey. These measures followed the explosion on a Russian passenger jet from Egypt and Turkey's shooting down of a Russian military plane.

Safonov's comments irritated many, particularly as his opponents pointed out that last year he himself officially declared two houses on the Seychelles. The word Seychelles in Russian became one of the top Twitter trends. "Yes, they think we are idiots," wrote anti-corruption campaigner Lyubov Sobol on Facebook, slamming Safonov for his "hypocrisy."

"From his house in the Seychelles, Safonov advises Russians to holiday at home," wrote opposition politician Alexei Navalny on his blog. Safonov responded to the furore by saying that he has now sold his Seychelles property. "Yes it's true I did have a villa and a house on the Seychelles. As of now, I have sold them, I no longer own them," Safonov told Dozhd independent television. Safonov recommended holidaymakers switch to the Russian-annexed peninsula of Crimea instead of going abroad, suggesting it should develop "all-inclusive" tourism. But the temperatures there are hardly tropical, at 14 degrees centigrade in the resort of Yalta yesterday afternoon. Before the revolution, many wealthy Russians flocked to sunny destinations such as the French Riviera, including writers Leo Tolstoy and Ivan Turgenev.
RELATED TOPICS