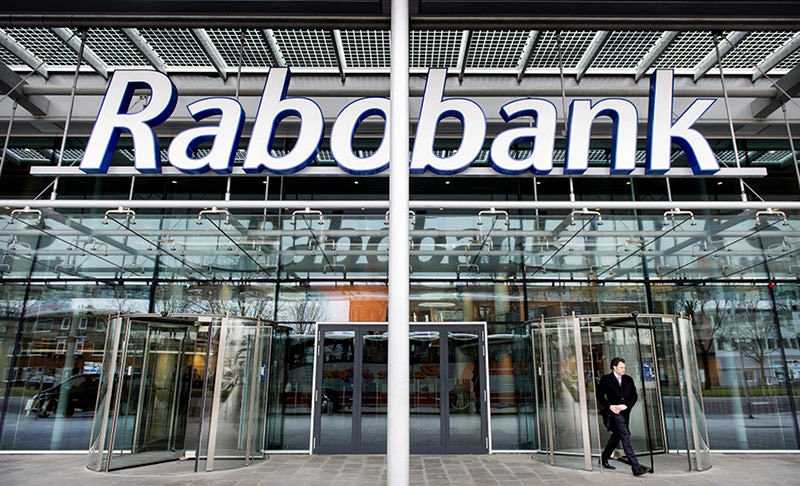 | File photo
by Dec 10, 2015 12:00 am
The Dutch agriculture cooperative Rabobank announced Wednesday it would cut more than a third of its local workforce, slashing 9,000 jobs over the next three years as it streamlines operations.

"The job losses will be mainly in the back office and support functions and will come on top of the reduction of 3,000 jobs already planned," said the bank, which has almost 24,000 employees in the Netherlands.

Rabobank, which emerged from small cooperative banks in the late 19th century serving farmers and horticulturists, made the announcement as it unveiled "its strategic direction" for 2016-2018.

Worldwide the bank employs just over 48,000 people and is active in 40 countries. But a spokeswoman for the bank confirmed to AFP the job losses would be within the Netherlands.

The bank wanted to ensure it can make a "substantial contribution to welfare and prosperity in the Netherlands" as well as to "feeding the world sustainably" by responding to changing consumer behaviour and new technological developments, it said in a statement.

The job losses would be phased in over three years, and would be achieved partly through natural wastage.

Rabobank would "make every possible effort to avoid compulsory redundancies," the statement said.
From January 1, the bank will now operate as one cooperative merging the 106 local Rabobanks -- a change which the member councils had already agreed to.

Union leader Reinier Castelein said "the job losses are not a surprise, but how many there will be, that is."

"It's thrown Rabobank employees into a period of uncertainty just before the holiday season," he told the public television NOS.

It is the third reorganisation to be carried out by the bank since 2011, which have already led to thousands of job losses.

"We need to make fundamental changes if we are to excel in customer focus," said the chairman of the board, Wiebe Draijer, adding changes had to come in "our businesses in the Netherlands and around the world."

He stressed customers increasingly want to conduct their banking via the Internet and Rabobank had to "seize the opportunities that innovation offers."

The bank did not receive any state help during the 2008 financial crisis, and had been seen globally as a good model.

But its image was tarnished by revelations that from May 2005 to January 2011 it allowed money market traders to manipulate Libor (London InterBank Offered Rate) submissions to benefit foreign currency trading positions.

In 2013 it was fined a total of 774 million euros (some $867 million then) by financial regulators in three countries for its role in the scandal, and paid the money to avoid prosecution.
Last Update: Dec 10, 2015 11:34 am
RELATED TOPICS