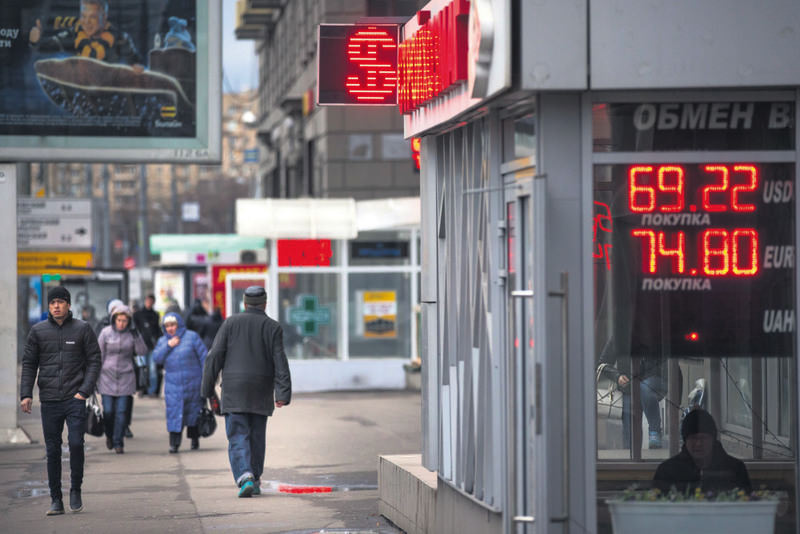 by Anadolu Agency Dec 10, 2015 12:00 am
Experts claim that Russia, whose economy is largely dependent on oil and natural gas exports, will not be able to overcome an economic downturn next year because of plummeting oil prices. The price per barrel of Brent crude oil, which fell from $115 to $39.8 in a year, has caused economic trouble in Russia, which obtains 58 percent of its overall export revenues from oil and natural gas.

Stressing that the recovery in the Russian economy will decelerate considerably because of low oil prices and political risks in the country, Ermolenko said, "The Russian budget has substantially shrunk; inflation is very high and the Russian ruble has dramatically fallen in value." Pointing to the fact that natural gas prices have dropped because of the fall in oil prices, Ermolenko stated the price of Russian natural gas might further plummet because of China's bargaining in natural gas purchase agreement with Russia.

Ermolenko said EU countries are striving to consume less Russian natural gas by establishing liquefied natural gas (LNG) facilities, adding: "Furthermore, countries such as the U.S., Australia, Iraq, Azerbaijan and Turkmenistan will be more active in global natural gas markets by 2018. This is a negative development for Russia, which obtains considerable revenues from natural gas."

Russian economic growth is expected to be near zero in 2016 . Marsel Salikhov, the head of the Russian Energy and Finance Institute, said the Russian economy would achieve hardly any growth next year. Underlining that conditions in Russia are not good enough to lead to economic growth, Salikhov said Russian fiscal policies have been tightened, and there is no planned fiscal invigoration for the upcoming year. There are many obstacles to traditional commodity exports, he added.

Salikhov argued that Russian natural gas would still be in an advantageous position because of LNG competition, which is expected to escalate in global markets, adding: "However, the main question is whether Gazprom will be able to use this advantage. Aside from this, political risks and conflicts in Russia have negative implications on the overall Russian economy."
RELATED TOPICS