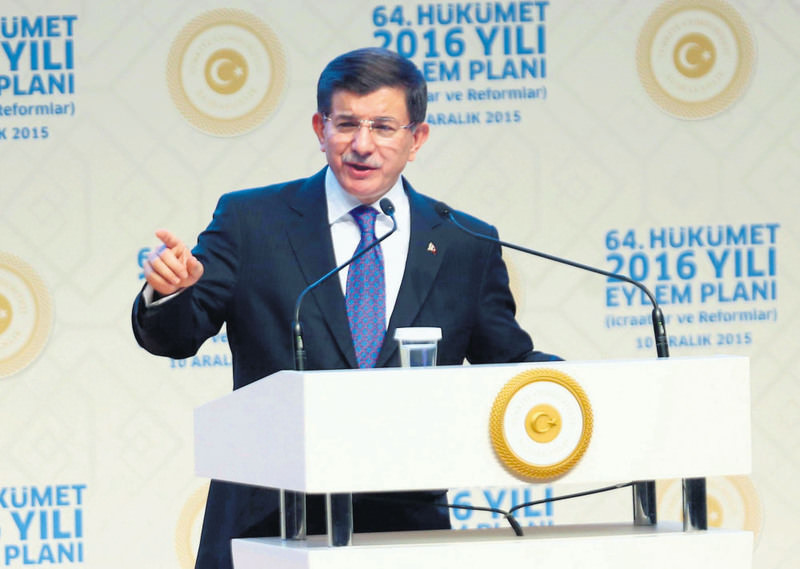 Prime Minister Ahmet Davutoglu delivers a speech during a meeting for the announcement of the 64th government 2016 action plan, at the ATO Congresium in Ankara yesterday.
by Daily Sabah Dec 11, 2015 12:00 am

The 64th government's 2016 action plan includes generous offers for everyone, especially the youth and women. The plan provides new incentives for the private sector to push development while reducing costs

Prime Minister Ahmet Davutoğlu announced Thursday the 2016 Action Plan of the 64th government, which includes various promises for tradesmen, workers, farmers, students and women to be implemented within the next three months.

The plan promises various support for students, graduates and youth including TL 50,000 ($17,150) in financial support plus up to TL 100,000 in interest-free loans for young entrepreneurs. The first step to realize this will be taken at the Entrepreneurship Award Ceremony on Dec. 24. The government will cover the wages of new graduates being employed for the first time, and Davutoğlu stressed that the related regulation will enter into force within the next three months.

Passport fees for students are also being removed, and the general health insurance for high school and university graduates will be covered by the government for the first two years after their graduation. More internship incentives will be provided for graduates of vocational high schools and universities as well. The grants and student loans available to undergraduates will also be increased to TL 400. Moreover, the commutation fee for Turkish citizens residing abroad will be decreased from 6,000 euros to 1,000 euros.

Davutoğlu said the plan will include improvements for small business owners such as non-taxation of their income of up to TL 8,000.

According to the plan, value-added tax (VAT) will not be imposed on feed and fertilizers, and furthermore, financial support of up to TL 30,000 will be granted to younger farmers for projects they submit. Also, programs for extending rural development incentives to 81 cities are in progress.

The social security support contribution deducted from the pensions of the Social Security Authority, Social Security Organization for Artisans and Self-Employed and State Retirement Fund will be cancelled within three months. Moreover, all deductions from the wages of employees who are 65 years old or older will be removed.

Davutoğlu said preparations are being made to increase the minimum wage to TL 1,300, marking a 30 percent hike, yet further regulations will be put in place in order for the employers not to suffer from this increase. The government will also take further steps to minimize the burden on small and medium-sized enterprises (SMEs). For example, the costs and fees paid to the Turkish Standards Institute and for patent certificates will be covered by the government. Guarantee limits for SMEs will also be increased. The wages of village headmen will also be increased to TL 1,300 from TL 950 within the next three months. Additional benefits for policemen and specialized sergeants will rise to TL 3,000 from TL 2,200, and the security service benefits of policemen will also rise 25 percent.

Women will be offered the chance to work part-time and periods of maternity leave will also be included in the length of service. Also, a dowry account system will be established. Furthermore, reforms will be made to reorganize public administration according to the requests and needs of the citizens, and the Public Tender Code will be updated. Arrangements to provide worker flexibility will be implemented through the end of March as well. The plan also includes various new regulations and steps in facilitating trade, including submitting the Agreement on Facilitation of Trade to the approval of the Grand National Assembly of Turkey, activating the Istanbul Arbitration Center, exempting financing of the construction industry and machinery-equipment investments from the Banking and Insurance Transaction Tax (BSMV).

Boards for the coordination and consultancy of Preferential Transformation Plans, within the development programs of the government, will be established. Standards for duties and services of investment monitoring and coordination directorates in cities will be issued and entered into force as well. Other steps that will be taken according to the plan in six months include completing the restructuring of Turkish State Railways (TCDD), liberalizing railway business management and the implementation of the legal regulations for the Canal Istanbul Project. Furthermore, the government is planning to prepare and put into force a new election and political parties code. Lastly, amending the constitution is one of the major priorities of the 64th government, according to the action plan.

Davutoğlu said the Cabinet decree for the implementation of the plan will be issued within the next week, and the Reform Coordination and Observation Board and reform groups will be established within a week.
RELATED TOPICS