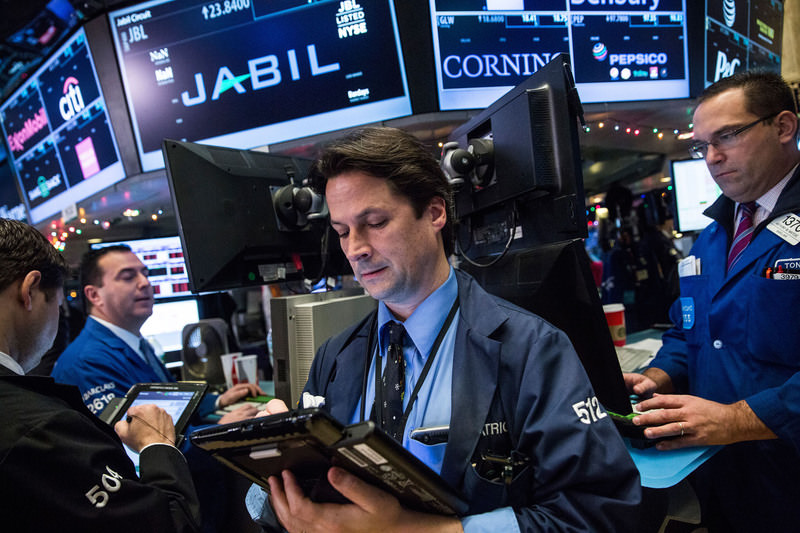 Traders work on the floor of the New York Stock Exchange during the morning of December 14, 2015 in New York City. (AFP Photo)
by Dec 14, 2015 12:00 am
Global equity markets were subjected to volatile trading on Monday as oil prices bounced from multi-year lows while weakness in credit markets weighed on sentiment, with investors bracing for an expected U.S. interest rate hike later this week.

The earlier declines in energy weighed on commodity stocks in Europe, which turned negative after a positive start, while the S&P energy sector .SPNY reversed course and was up 0.3 percent after falling as much as 1.3 percent earlier in the session.

Jitters in high-yield bond markets, which are among the most vulnerable to higher U.S. rates, also rattled investors. Lucidus Capital Partners has liquidated its entire portfolio and plans to return the $900 million it has under management to investors next month, according to a media report.

"There are three things that have raised anxiety and volatility in the equity markets, one is oil and whether the continued deflation there is signaling a global lack of demand for maybe not just oil but for everything," said David Donabedian, chief investment officer at Atlantic Trust in Baltimore, Maryland.

"What has happened in the credit markets recently is also a big deal, and all of those issues emerging on the doorstep on the Fed getting ready to raise interest rates."

The U.S. dollar slipped against major currencies, giving back earlier gains to resume last week's weakness on worries that heightened market volatility, caused by the tumult in oil prices and credit markets, could limit the number of U.S. interest rate hikes.

A Fed rate hike on Wednesday, following a two-day policy meeting, is a near certainty in the eyes of investors. It would be the first increase after nearly a decade of loose policy that began with the onset of the global financial crisis, and is viewed as a first step towards normalizing monetary conditions.

Traders see an 85 percent chance the central bank will lift its targeted rate range to 0.25 percent to 0.50 percent from the current zero to 0.25 percent range, according to CME Group's FedWatch program.

But against a backdrop of crumbling oil prices and stress in the high-yield bond market, analysts said the pace of future rate hikes is of key interest to investors.