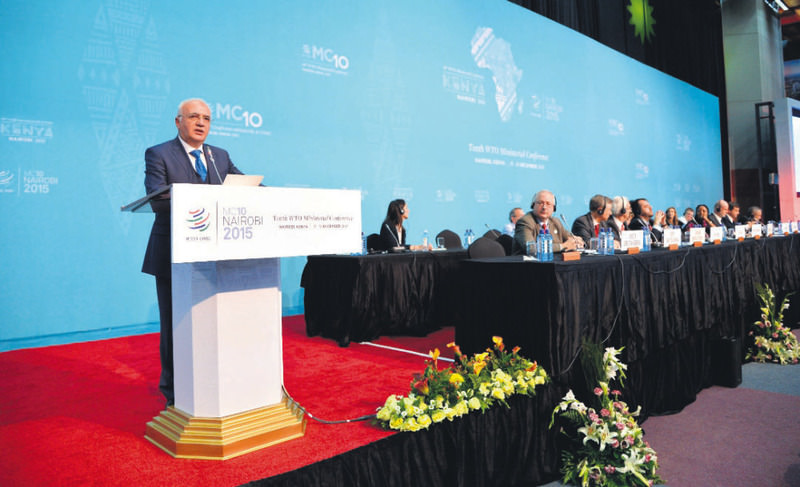 by Anadolu Agency Dec 17, 2015 12:00 am
Economy Minister Mustafa Elitaş said that Turkey will focus on finding solutions for the problems affecting poor and less developed countries in multilateral trading systems as emphasized by President Recep Tayyip Erdoğan during the G20 summit in Antalya. The minister was speaking in an interview with Anadolu Agency at the World Trade Organization's (WTO) 10th ministerial meeting on Tuesday.

"Turkey will underline and emphasize the need that we should strengthen the multilateral trade system. Most importantly, what we are going to try to emphasize during the 10th ministerial conference here is that we should further encourage and strengthen the capacities of the least-developed countries in order to increase their trade," Elitaş said.

"This will be the main message from Turkey," the minister stressed. "An economic system that does not include the least-developed countries or the poorest countries is not a fair one. Problems faced by poor countries are not a local problem - on the contrary, these are global problems, and we can only overcome global problems by finding global solutions."

Turkey has been at the forefront of the fight against poverty in the world's least developed countries and was ranked the third most generous international donor worldwide in 2014, with a $1.6 billion allocation to humanitarian assistance.

Elitaş added that the same sentiments on supporting poor countries have also been voiced by Prime Minister Ahmet Davutoğlu. "Our prime minister expressed the same message, that we should always be on the side of the neglected nations, I also believe that we will find an occasion to express our priorities regarding the agricultural and industrial sectors of Turkey [at the conference]," he said.

The minister added that, while in Nairobi, his country will be holding bilateral and multilateral meetings as part of the framework of the WTO ministerial conference with different ministers and delegations. He said that Turkey has also shared - during a meeting with the Islamic Development Bank - its opinions regarding how countries can improve the multilateral trade system.

"We will also go through our bilateral relations with the ministers of 15 different countries, just to name a few Japan, the United Kingdom, Canada, Saudi Arabia and Pakistan."

Regarding the accession of Afghanistan and Liberia to the WTO, the minister said that his country fully supports their candidacy.

"We [Turkey] are pleased to see that they are members of the WTO; our priority is to find solutions to the problems affecting poor countries and less-developed countries in such a multilateral trading system. This is how we can come up with solutions for their problems, and I am sure that the membership of Afghanistan and Liberia will be a great opportunity for these two countries."

Turkey has been holding bilateral meetings with different trade ministers since Monday, the minister said. "Turkey is in Nairobi to accelerate all the negotiations and all the efforts that are still going on between member countries to reach fruitful agreements."

The minister congratulated the Kenyan government and the people of Kenya for holding the WTO ministerial conference. He thanked the Kenyans for their hospitality and said that he will hold bilateral talks with Kenyan government officials on how to boost trade relations between the two countries.

The minister recalled that Turkey was a candidate for hosting the 10th ministerial conference of the WTO, but after learning that Kenya was one of the candidates, Turkey stepped down in favor of Kenya.

"We wanted Kenya to be the country to host the first WTO ministerial level conference in Africa," he said.
Last Update: Dec 17, 2015 1:14 am
RELATED TOPICS