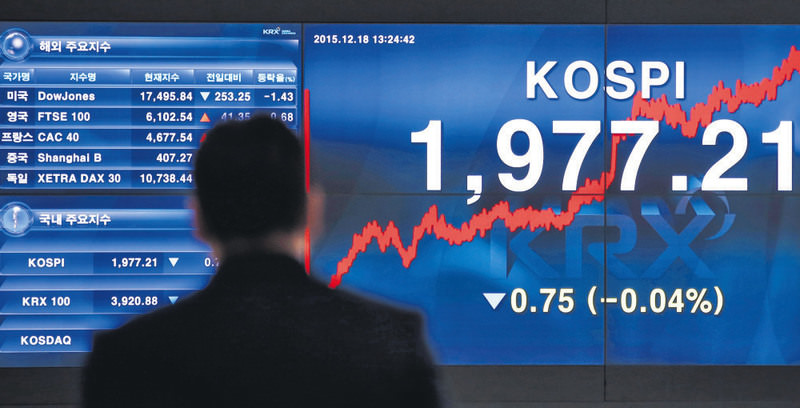 A man looks at an electronic screen showing the foreign stock price index, left, and the Korea Composite Stock Price Index (KOSPI), right, in Seoul, South Korea.
by Dec 21, 2015 12:00 am

The world economy may be set for another year like 2015, with modest growth in developed economies offsetting persistent weakness elsewhere but generating very little inflation and keeping interest rates low

The U.S. Federal Reserve's long-awaited rise in rates from zero showed confidence in the world's largest economy, but rival China is still struggling for a foothold with rate cuts. Although some countries, such as Brazil, have mainly home-grown inflation troubles, the Fed's first post-crisis rate hike is an unlikely cure for what ails the rest of the world. With exchange rates dominating the policy debate in many countries, what happens to the dollar will matter a lot.

"The key question is whether the U.S. economy is finally robust enough not only to sustain its own recovery but also to lift world trade and global growth enough to allow the external deflationary pressures weighing on U.S. inflation to wane," outlined HSBC economists Janet Henry and James Pomeroy.

Along with an abrupt downturn in the volume of global trade and a continuing fall in commodity prices, the dollar's rise this year has brought U.S. industrial growth to a near-standstill, keeping a lid on inflation pressures from abroad. The other extreme, according to HSBC, is that the United States, "via a strong U.S. dollar, will simply become the latest victim of the deflationary pass-the-parcel which has plagued the global economy for a decade, and find itself following all of the other developed market central banks which raised rates but soon found they had to reverse course." "The outcome, we believe, is likely to be somewhere in between."

A Reuters poll of 120 economists on Friday forecast the Fed would hike rates again in March, but probably won't move as quickly next year as policymakers have suggested. Other recent Reuters surveys of hundreds of analysts worldwide do not offer hope for a pickup in inflation, even in the United States where the central bank says it is reasonably confident this will happen. Even the most optimistic core inflation forecasts are not far above 2 percent.The polls point to global growth averaging only 3.4 percent next year with scant prospect of touching 4 percent given the slowdown in China and the gloom surrounding emerging markets.

Nor is it easy to find analysts expecting broad weakness in the dollar, with the most aggressive views suggesting the euro could even fall below parity.

China's renminbi, now a reserve currency, has fallen each day for most of the past two weeks, with many bracing for further devaluation by Chinese authorities still looking for ways to stimulate the debt-laden economy.

The U.S. growth and inflation outlook is bleaker than forecast this time last year, even after a sharp fall in unemployment. Wage inflation has picked up, but by less than many had thought it would. Wall Street stock indexes are trading near their levels of a year ago, confounding predictions of a solid rise in 2015, with strategists still expecting them to climb despite downward pressure on earnings.

Over the past year, global fund managers have cut their recommendations for equity holdings to near their lowest since the financial crisis, even as they ramped up bond holdings. U.S. Treasury yields are not far from where they were this time last year either, but they too are expected to climb, as has been the forecast for many years now, although by less this year than one might expect. Since crude oil prices began falling sharply 18 months ago from above $100 a barrel to below $40 now, the number of analysts predicting a rebound has dwindled. Some are now saying $20 is more likely than a sizeable move higher.

But there are some bright spots. Underpinned by the European Central Bank's 60 billion euros a month of bond purchases, the euro zone is finally generating modest growth and unemployment has begun to fall. Inflation remains well below target, however, and so ECB stimulus, including the negative deposit rate, will remain in place for all of next year. That puts the world's largest trading bloc -- and most other central banks -- on an opposite policy path to the Fed. Some emerging market economies are performing better, too. India is forecast to grow at a decent clip, underpinned by rate cuts earlier this year during a window of low inflation. And optimism about Mexico has grown as it slowly starts to take advantage of a recent historic reform in the energy sector. But much can still go wrong. Food prices have already pushed Brazil's inflation above 10 percent during a deep recession and could rise further.