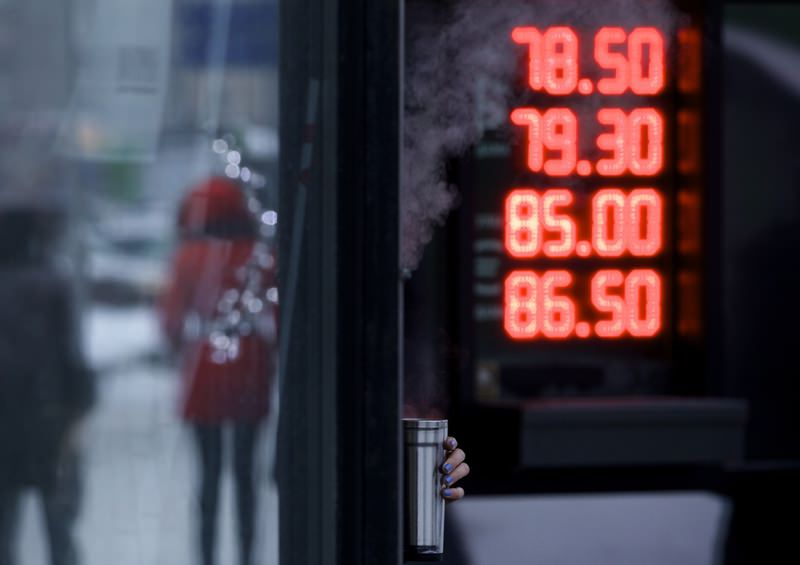 by Daily Sabah with Wires Jan 19, 2016 12:00 am
The price of crude oil has plummeted to a record low and Russian Minister of Finance Anton Siluanov noted that if prices continue to hover at this level, the Russian economy could face a $39 billion budget deficit.

Russian stock markets and the ruble fell further on Monday as the currency edged closer to a historic low in the wake of the latest slump in oil prices. At the start of trading, the ruble dropped to 78 against the dollar, nearing its record of just over 80 that it hit when the currency tumbled dramatically in December 2014. Russia's dollar-denominated RTS index fell by nearly 3 percent in early trading by 7:20 GMT, indicating that it has shed some 16 percent since the start of the year. The Russian finance minister stated that if the current price of crude oil stays at this level, the budget deficit might hit 3 trillion rubles ($38.6 billion), causing Russia to dip into its National Welfare Fund and warrant budget revisions in accordance to the plummeting oil prices. Siluanov also noted that the price of Russia's main export item has fallen to one-fourth of its value, adding that it is hard for the prices to fall further.

The Kremlin - whose energy-reliant economy has already been pushed into a recession by low oil prices and Western sanctions over Russian actions in Ukraine - has once again taken a hit with the slump in prices. In short, the Russian economy is now suffering more from current oil prices than it is from Western sanctions.

A barrel of Brent crude dropped below $28 briefly amidst fears of oversupply following the lifting of international sanctions on Iran over its nuclear program.

"Oil is a key driving force at the moment, and if its decline continues, the FX market will continue adjusting," analysts at Russia's VTB Bank said in an official statement. Russia relies on oil and gas for more than half of its budget revenues and the recent slump in prices has already forced the government to focus on major spending cuts as it seeks to rein in a potential deficit.
RELATED TOPICS