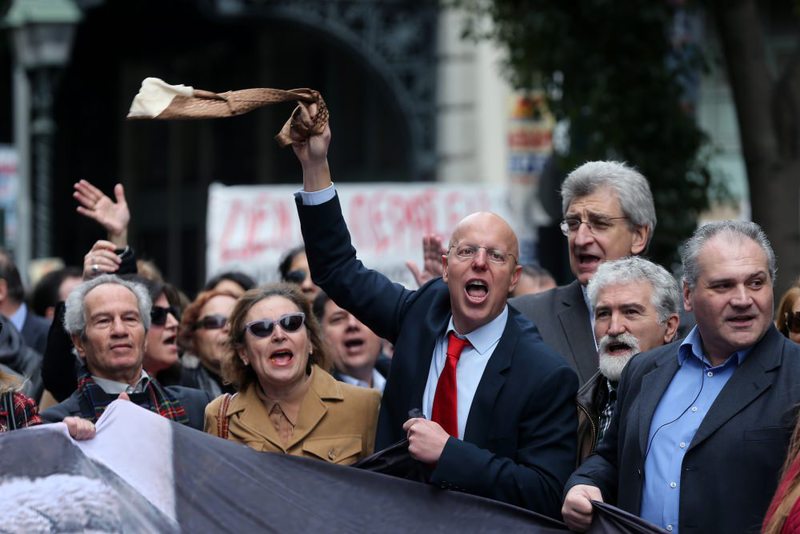 A lawyer waves his tie as others shout slogans during a 24-hour, nationwide general strike in Athens on Thursday. (AP Photo)
by Associated Press Feb 06, 2016 12:00 am

By increasing the social security contributions, the Greek government is trying to ameliorate the problematic pension system, which faced difficulties due to a heavily indebted economy with high unemployment rates

Combine a rapidly aging population, a depleted work force and leaky finances and any country's pension system would be in trouble. For debt-hobbled, unemployment-plagued Greece, it's a nightmare. Hemmed in by a grim economic reality and tough-talking bailout creditors, the leftwing-led government in Athens is now attempting the seemingly impossible: to reform the pension system without cutting pensions, largely through a steep increase in social security contributions. The overhaul, which creditors are demanding in return for rescue loans, means Greeks who have a job and who are outnumbered by the unemployed and retired have to pay for the rest.

Unions are up in arms about the move, which has become the main hurdle in Greece's negotiations with its European creditors and the International Monetary Fund. Critics say the reform will heap the most pain on self-employed professionals and farmers, forcing them to pay up to three quarters of their income in pension contributions and taxes. They warn the majority will be forced to change jobs or emigrate accelerating the brain drain the country has suffered since the crisis started in 2010. "We are fighting for our very survival," said Georgios Stassinos, head of the country's biggest engineers' union. If the reforms are adopted, he said, "the country will be left without engineers, doctors, lawyers, pharmacists and economists."

The head of Greece's bar associations, Vassilios Alexandris, said the new system would reduce some lawyers' net incomes to as little as 31 percent of their gross intakes, from the current 46 percent. "Professionals will not pay their (pension) contributions, not out of choice but because they will be unable to," he said.

In Greek cities, a wave of protests has become known as the necktie revolution, from a series of demonstrations by formally-dressed professionals. The discontent is even more obvious in the countryside, where farmers have manned highway blockades for over two weeks. Costas Alexandris, a farmers' union leader in the northeastern area of Thrace, said he stands to pay 75 percent of his income in taxes and contributions next year under the government's proposals, which include taxation on subsidies and a leap in farmers' pension contributions from 7 to 28 percent. But if Greece wants to make its pensions system viable, it has few options.

Current retirees have already seen their pensions cut repeatedly under austerity programs since 2009 and the retirement age has been raised from about 62 to 67. Greece has the sixth oldest population in the world, according to United Nations data, and spends more than 16 percent of GDP on pensions above the European average up from 11.7 percent of GDP before the financial crisis, as the economy shrank. Out of a population of nearly 11 million, Greece has 3.6 million workers but 2.66 million pensioners and 1.2 million unemployed. The situation will only get worse in years ahead, as deaths have overtaken births since the financial crisis broke out.

Past governments sweetened voters by offering mass pension rights to people who contributed little to the system, were generous on early retirement and provided pensions that were sometimes higher than what retirees earned at their jobs. The average pension is currently about 900 euros ($1,000), and a recent study found that pensions are the main source of income for 52 percent of all Greek households up from 40 percent in 2011.

In defense of the proposed reforms, farmers had until now contributed very little for their pensions, and retirement contributions are based on declared income, which is often understated in Greece. "We want a pension system that doesn't place the burden of subsidizing other people's pensions on the usual victims, salaried employees," Labor Minister George Katrougalos said. His draft would involve merging all pension funds into one with common rules for all, and providing a basic, state-funded pension for all 384 euros that is supplemented with contributions. Katrougalos insists current core pensions will be left untouched, while future pensions will not change drastically for the worse.

The popular protests against the government are ironic, because for years as a small opposition party, the now-governing Syriza was the standard bearer of demonstrations against pension reform. Prime Minister Alexis Tsipras was first elected on pledges to reverse creditor-demanded austerity, but was forced into a U-turn last year after other European countries threatened to kick Greece out of the eurozone.

The pension proposals, which opposition parties reject, are likely to be submitted this month to Parliament, where Tsipras' coalition controls only a slim majority, 153 of the 300 seats. "So far these protests have not threatened government cohesion, but this will not always be the case," said Megan Greene, chief economist of Manulife Asset Management. "The Tsipras government has little room for maneuver."

Former labor minister Tassos Giannitsis, who attempted sweeping reforms 15 years ago, only to be defeated by a union revolt, argues that Greece's pension problems triggered the country's financial crisis in the first place by bloating the budget deficits before 2009.

"As long as the target is to avoid any new (pension) cuts, people who work will have to sacrifice much more than previous generations, through higher contributions or new taxes ... and bear the burden of future repayment of the heavy debts of the past," he told a recent panel discussion. "Furthermore, they lack any certainty regarding their own future pensions."
RELATED TOPICS