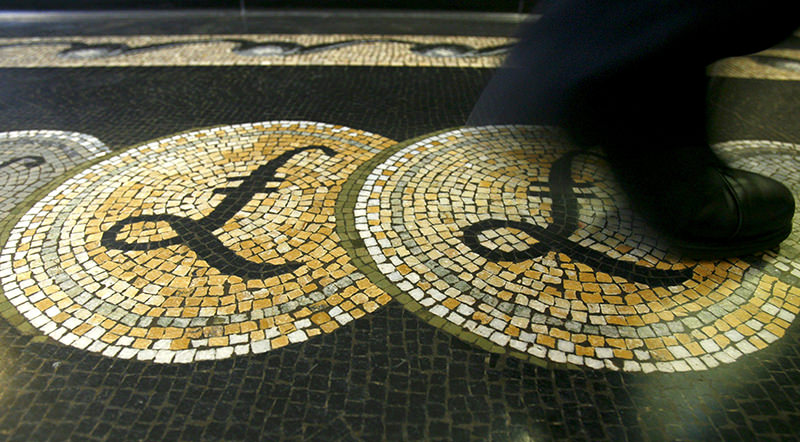 An employee is seen walking over a mosaic of pound sterling symbols set in the floor of the front hall of the Bank of England in London, on March 25, 2008. (REUTERS Photo)
by Daily Sabah with AFP Feb 22, 2016 12:00 am
The British pound plunged to a near seven-year low against the dollar in Monday trading on concerns about the possibility of Britain voting to leave the European Union in a June referendum.

The pound fell to $1.4058 in early afternoon, its lowest level since March 2009, after the popular Mayor of London Boris Johnson on Sunday threw his weight behind the campaign for Brexit.

The pound was also under pressure against the euro, falling to 77.98 pence to the euro at around 1510 GMT compared to 77.35 pence on Friday.

The charismatic Johnson, an MP from Prime Minister David Cameron's own Conservative Party, on Sunday said he would campaign for Britain to leave the EU in the June 23 vote.

"Boris is one of the few British politicians liked by the British public and is a significant coup for the 'Out' campaign. The odds of a Brexit has shifted a few percentage points with Boris on the 'out' side," he said.

Simon Smith, chief economist at FxPro, said: "With yesterday showing the influential London Mayor... coming out in favour of the UK leaving, then sterling took a more bearish view."

"For sterling... this won't be a fun time and it's more the uncertainty that will weigh on the currency, rather than investors taking a view on the outcome and the implications for the economy."

European leaders finally sealed a deal Friday on reforms demanded by British Prime Minister David Cameron after hours of haggling in Brussels, paving the way for a referendum on whether Britain will stay in the EU.

The deal sets the stage for campaigning to start in earnest over a so-called "Brexit" ahead of a referendum on June 23.

Cameron is calling for Britain to stay after the deal, but six members of his cabinet announced they would support leaving on Saturday, highlighting rifts in the ruling Tory Party.

"Even if an exit isn't likely, uncertainty and concerns about it will continue and weigh on sterling," Kengo Suzuki, chief currency strategist at Mizuho Securities, told Bloomberg News.

"On the economic front, there isn't much to undermine the currency, but the uncertainty over a potential exit will cap sterling, keeping it in a $1.40 to $1.50 range."

Analysts said the yen -- seen as a safe haven in times of turmoil -- may rise again on lingering concerns about Britain's future EU membership and unsteady oil prices.

Markets are also eyeing Japanese inflation and revised US GDP data due this week, and a meeting of ministers from the Group of 20 set to start Friday in Shanghai.