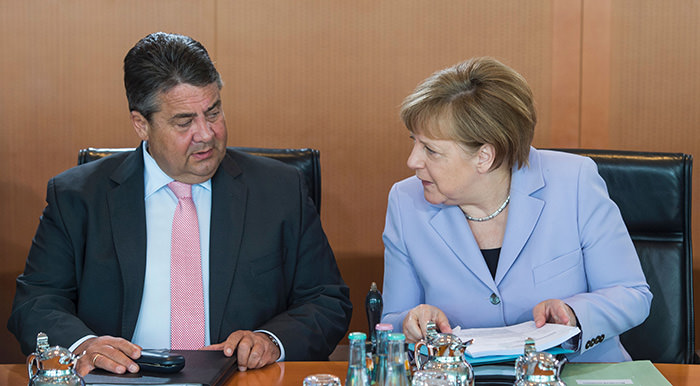 German Chancellor Angela Merkel (R) and German Vice Chancellor, Economy and Energy Minister Sigmar Gabriel (L) sit down for a weekly meeting of the German cabinet at the chancellery in Berlin on May 11, 2016 (AFP Photo)
by Compiled from Wire Services May 13, 2016 12:00 am
A surge in government spending to support the influx of refugees to Germany over the last year was one of the main drivers in first-quarter economic growth, Germany's statistics agency reported Friday.

The figure for the January-March period compared with growth of 0.3 percent in last year's final three months. It was stronger than any quarter last year.

The German economy, Europe's biggest, is traditionally export-heavy but lately has been fueled increasingly by domestic demand. Friday's report underlined that trend.

The Federal Statistical Office said that private and government spending, along with investment in equipment and construction, increased — the latter helped by relatively mild winter weather. Foreign trade weighed on growth slightly, with imports increasing more than exports.

The government is predicting that gross domestic product will grow 1.7 percent this year, the same as last year.

"Today's data are another sign of Germany's economic strength — at least at first glance," said Carsten Brzeski, an economist at ING-DiBa in Frankfurt. "The economy defied the financial market turmoil at the start of the year as well as the Chinese slowdown."

He argued that the biggest risk for Germany is complacency — with spending and construction driving growth and the government "reluctant to follow up on international advice to implement structural reforms."

Also on Friday, Germany's biggest industrial union secured a 2.8 percent pay raise starting in July, followed by a further 2 percent next April, a deal that is expected to apply to some 3.8 million workers in the automobile and machinery sectors among others.

The deal covers a 21-month period, backdated to April 1, with employees also getting a 150-euro ($171) one-time payment for the April-June period.

The IG Metall union went into negotiations seeking a 5 percent pay raise over one year. The deal was reached in western North Rhine-Westphalia state, but such agreements are typically extended across the country.

The statistical office said Friday that consumer prices were 0.1 percent lower in April than a year earlier. However, IG Metall argues that companies' earnings are healthy and wage increases help strengthen domestic demand, and economic growth.