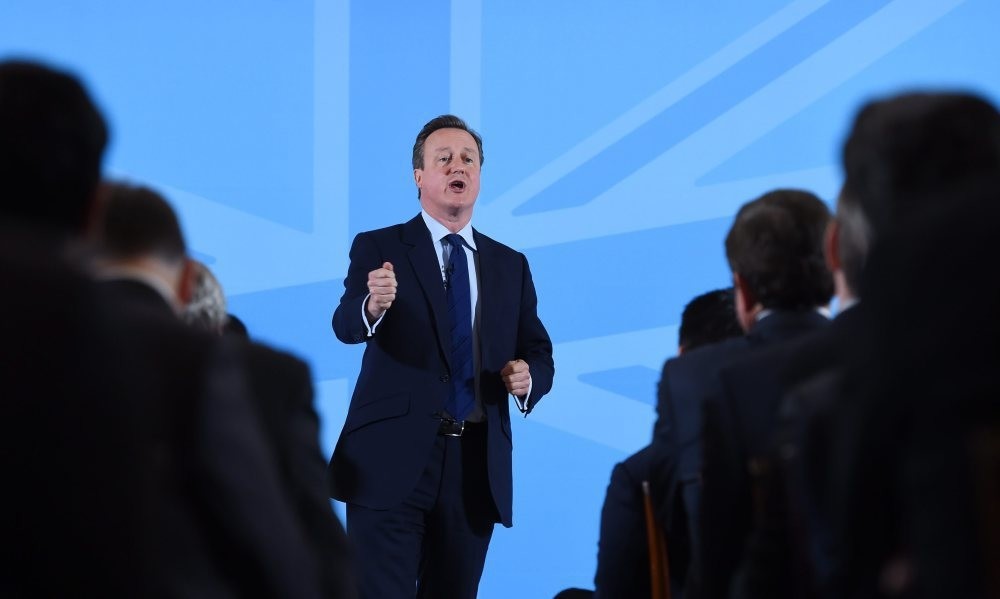 British Prime Minister, Cameron speaks to members of the World Economic Forum at Mansion House in London on May 17.
by May 24, 2016 12:00 am
Leaving the European Union (EU) would be economic self-destruction for Britain, shattering stability, Prime Minister David Cameron said yesterday, presenting a finance ministry report warning of recession, a tumble in the pound, and half a million job losses.

Cameron and finance minister George Osborne, who are campaigning for Britain to stay in the EU in the June 23 referendum, have warned that households would be hurt by a fall in the value of their homes and face costlier foreign holidays if they voted "Out".

"It would be a DIY recession," Cameron said in a speech at the offices of the B&Q retail chain, a popular center for do-it-yourself home improvement, in Eastleigh in southern England.

Speaking a month before the vote, Cameron said that leaving the EU would jeopardize Britain's recovery from the economic damage caused by the world financial crisis.

"It would be like surviving a fall and then running straight back to the cliff edge. It is the self-destruct option," Cameron said. Recent opinion polls have shown voters are leaning towards an "In" decision on June 23, but pollsters say the outcome remains too close to call. Betting odds indicate 80-85 percent probability of an "In" vote.

Some polls have also shown the economy growing in importance as an issue for voters, something the "Out" campaign has sought to counter by stressing that only leaving the EU can slow high levels of migration and avoid future economic stagnation.

A new analysis of short-term risks from the referendum published by the finance ministry on Monday said the economy could be as much as 6 percent smaller two years after a Brexit vote than if it the country decides to stay in the EU.

Osborne said Britain would lose at least half a million jobs within two years of a vote to leave and a fall in the value of the pound of between 12 and 15 percent would push up inflation sharply.

The campaign backing a British EU exit said the Treasury had consistently produced flawed reports and the latest analysis was biased as it provided nothing on the upside of leaving the bloc, nor on the potential negatives caused by a crisis in the eurozone.

"What they've done is they assumed a disaster and then spelled out the details," Nigel Lawson, a finance minister under the late Conservative Prime Minister Margaret Thatcher in the 1980s, told BBC TV. "They've done this in order to scare the pants off the British people because they can't find anything positive to say about the European Union." Osborne defended the credibility of the report, saying it had been reviewed by Charlie Bean, a former deputy governor of the Bank of England.

Yesterday's forecast of a year-long recession by the finance ministry was gloomier than a warning by Bank of England Governor Mark Carney who said earlier this month that Britain's economy could enter a technical recession - which means two consecutive calendar quarters of contraction - after a vote to leave the EU.