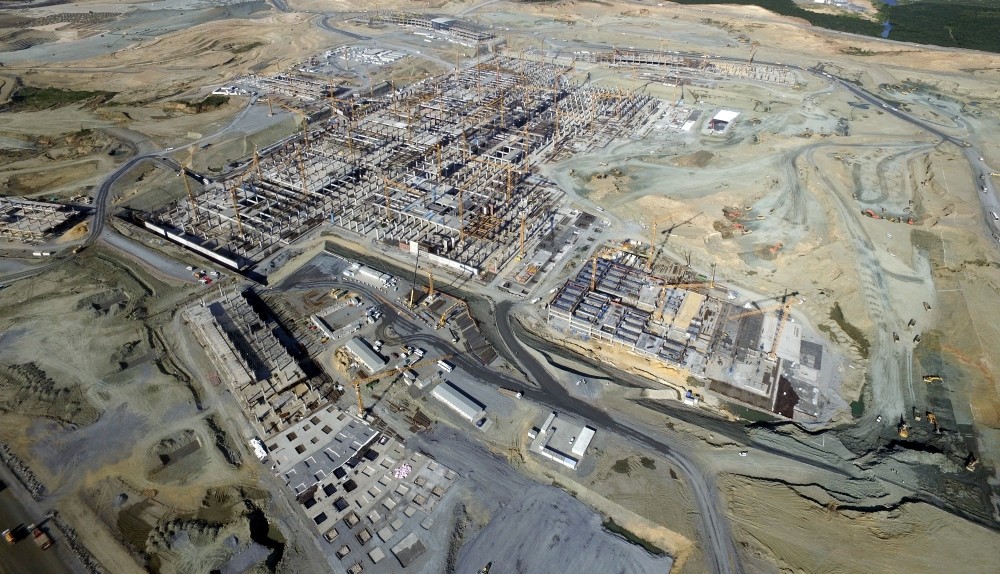 by İbrahım Acar May 25, 2016 12:00 am
Istanbul's third airport, being built on 18,780 acres, will support local manufacturers. Flagstone, steel structures, glass and woodwork that will be used for the interior architecture of the airport will be obtained domestically. Istanbul Grand Airport (IGA) CEO Yusuf Akçayoğlu said there were more advantageous countries price wise, but they preferred local products even though they are more difficult to source.

What will be the world's biggest airport, with a 200 million-passenger capacity per year, the third airport project will be mainly built with local products. The operator of the new airport, IGA administration, has decided to buy all of the granite, woodwork and steelwork for the 700,000 square meters of flooring from the local suppliers even though it will be onerous in terms of supply and cost. Meeting at the Istanbul Chamber of Commerce (ICOC) three months ago with an understanding of why they will use imported products when there are domestic ones, IGA will positively discriminate in favor of Turkish firms for the 7 billion euro part the local industry can produce, following President Erdoğan's instructions to use domestic products for the airport.

Hosting ICOC members at the airport's construction site, Akçayoğlu said: "The project is at 24 percent financially and 20 percent physically. All the decking, wood and steelwork will be local."

Even before its completion, the airport has already started contributing to the national economy. Deciding to provide all the materials for the interior architecture from the domestic market, IGA hosted a group of business figures from the ICOC. Speaking to reporters about the latest status of the airport before the ICOC members' visit, Akçayoğlu said: "We took flagstone samples from different parts of Turkey. Flagstones will be laid on 500,000 square meters. The craftwork such as woodwork, steel products, steel roofs and glass will be bought from local industry." Explaining that local granite would be hard to get and there were more advantageous countries price wise, Akçayoğlu said they consider the new airport a national project and they want to contribute to national industry and national workforce as much as possible.

Recalling that the operation period of the new airport is expected to start on Oct. 29, 2018, Akçayolu said they are planning to complete the first stage of the airport and put it into service during the first quarter of 2018. According to Akçayoğlu, the first stage, with a capacity of 90 million passengers, will have three independent runways north-south. There are 2,962 construction vehicles currently working in the field, 2,200 of which are straddle carriers. There are 15,153 employees, 506 of which are white-collar, including engineers, architects and managers. Explaining that the number of employees would reach 30,000 during the peak period, Akçayoğlu said they built a 700,000 square meter 18,000-vehicle capacity parking lot, in which the capacity could be increased up to 25,000.

Akçayoğlu said they have not completed the bidding sessions, and they aim to complete the metro and access roads as soon as possible. Asking for support from the new government for contract bidding, Akçayoğlu said: "The Mecidiyeköy line is very important to us. We will try to reduce the time down to 20 minutes. We believe the new transportation minister will provide us with support in this." Recalling that transportation to the airport would be possible with a high-speed train line as well as a metro line in the Halkalı direction, Akçayoğlu said they are trying to finish the Gayrettepe metro line as soon as possible, and the North Marmara Highway and Yavuz Sultan Selim Bridge will ease the transportation to the airport as well.

According Akçayoğlu, the new airport has a main terminal building with a closed area of 1.3 million square meters. It is five times bigger than the Empire State Building in New York. The 180,000 tons of reinforcement to be used in the terminal building equals 24 Eiffel Towers. Some 200 million passengers are expected to fly through the airport, which will have 350 destinations worldwide. Akçayoğlu said 7 billion euros has been spent on its construction so far and that places of worship would be installed for all religions.
RELATED TOPICS