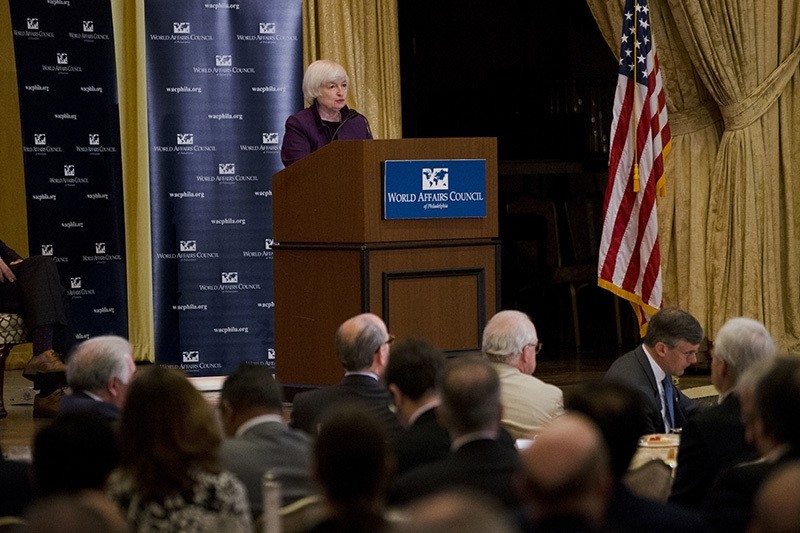 Federal Reserve Chair Janet Yellen said Monday the dismal US jobs report for May was "concerning" and "disappointing," but stressed she was still optimistic on the outlook for US economic growth.

"One should never attach too much significance to any single monthly report," Yellen said, adding that the overall labor market situation has been "quite positive."

Even so, in her first comments since Friday's monthly jobs market data shocked markets and sent the dollar tumbling, Yellen backed off from making specific forecasts for interest rate increases, only saying they should come "gradually."

That was a clear shift from the Fed stance prior to the report, when she and other Fed policymakers had strongly suggested that the Fed could raise its benchmark federal funds rate either in June or July.

In a speech on the economic outlook to the World Affairs Council of Philadelphia, Yellen stressed that she thought the US economy would continue to grow moderately, that the labor market had nearly eliminated all slack, and that inflation would turn higher toward the Fed's goal of two percent.

"I see good reasons to expect that the positive forces supporting employment growth and higher inflation will continue to outweigh the negative ones," she said.

"As a result, I expect the economic expansion to continue, with the labor market improving further and GDP growing moderately."

But she acknowledged that the May jobs report, the worst in nearly six years in terms of monthly jobs creation, had posed new questions and that the situation would have to be watched in case of a broader slowdown.

Only 38,000 new positions were added in May, compared with some 155,000 the economists had forecast on average.

And while the unemployment rate fell to 4.7 percent, the lowest since November 2007, it was mainly because of people dropping out of the labor market rather than people getting jobs.

Yellen cautioned over a number of uncertainties facing US growth, including the strength of consumer spending and business investment, slowing Chinese growth, and the upcoming British referendum vote on splitting with the European Union.

"A UK vote to exit the European Union could have significant economic repercussions," she warned.

While she stressed her confidence that the US economy remains in good shape, Yellen was clearly more dovish than when she said on May 27 that a federal funds rate increase could be justified "in the coming months."

Backing away from that on Monday, she said less precisely that if the jobs market continues to strengthen and prices pick up, "further gradual increases in the federal funds rate are likely to be appropriate."

She said the May labor market data could suggest that US businesses had decided to expand more slowly.

"I intend to continue to pay close attention to developments in this area," she said.

US Treasury bond yields fell and the dollar weakened slightly after her speech. At about 1740 GMT the dollar was at $1.1374 per euro. The S&P 500, the broad-market stock index, was up 0.4 percent.