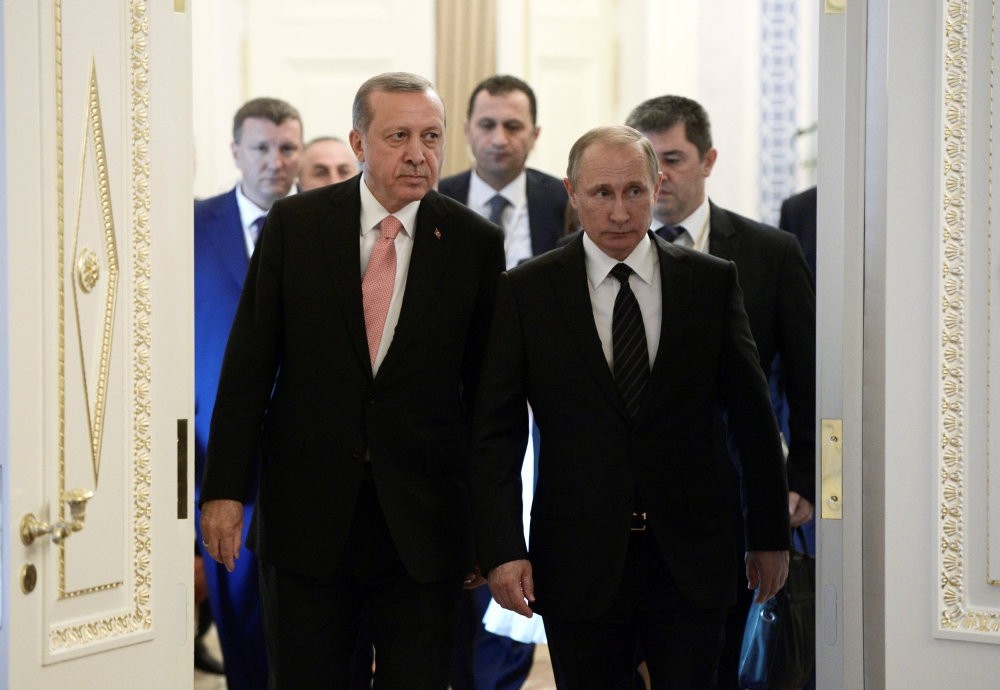 President Recep Tayyip Erdoğan and Russian President Vladimir Putin's summit on Tuesday put a strong emphasis on economic cooperation between Turkey and Russia through the realization of a medium-term plan until 2018, particularly in the field of energy. Both leaders expressed strong determination to return economic relations to pre-crisis levels.

Erdoğan detailed steps to be taken toward the resumption of economic relations, saying that the Turkish Stream Project will take concrete steps to gain momentum. The Akkuyu Nuclear Power Plant project, Turkey's first nuclear plant, will be considered a strategic investment, as Erdoğan underlined during their joint press conference. Putin underlined significant cooperation in the energy sector. Putin said that concrete political steps are necessary for the realization of projects such as the Akkuyu Plant and the Turkish Stream natural gas pipeline project.

Erdoğan announced that Turkey and Russia will work together to establish a fund for investments, while paving the way to fully lift restrictions on charter flights, food trade as well as other economic areas, speeding up the investment projects, and cooperation on defense sector. Erdoğan said that the two countries target a trade volume of $100 billion, a record set before the crisis that erupted due to the downing of a Russian fighter jet in November last year. Putin observed that despite the crisis in relations, mega projects undertaken by Turkish contractors were not disturbed and he added that there will be no problems in relation to these projects future.

Following the press conference, the two leaders met with the businessmen from Turkey and Russia to further foster business ties.

According to information from the Turkish Statistical Institute (TurkStat) and Russian Federal State Statistics Service (Rosstat), Russia ranked second in Turkish exports and third in the country's imports last year. The bilateral foreign trade volume, which stood at $38 billion in 2008, declined to $23.3 billion in 2015 as a result of the recession of Russian economy following the fall in oil prices.

After the fighter jet crisis, the trade volume between Turkey and Russia further declined. Turkey's exports to Russia in the first six months of 2016 fell to $737 million, marking a 60.5 percent slump compared to the same period last year. However, the sectors that were greatly affected by the breakdown of relations between Turkey and Russia, with exports and tourism taking the lead, hope to rapidly return to their heyday in the upcoming period. Speaking to Anadolu Agency (AA) last weekend, the representatives of sectors that have a great part in Turkey's exports to Russia reported that they anticipate that exports of leather and leather products, fresh fruit and vegetables, chemicals and chemical products, machinery and machinery parts, textiles and raw materials, ready-to-wear, automotive, electric-electronic and service industries will rapidly boom.

As well as the automotive industry, chemicals, ready-to-wear products, electronic instruments and mining products; Turkey's exports of consumable goods fell significantly because of Russia's sanctions, which were Moscow's revenge for downing a Russian warplane that violated its airspace on Nov. 24 last year.

The normalization of relations between Turkey and Russia gained momentum in June, a move that indicated the restoration trade ties after Erdoğan sent a letter to Putin to celebrate Russia's National Day, which marks the country's post-Soviet constitution, and Putin thanking Erdoğan along with the attendance of the Russian ambassador at an iftar dinner at the Presidential Palace in Ankara. Erdoğan's letter of condolences and regret set a precedent for an end to the crisis between the two countries. Shortly after the letter was sent, a 45-minute phone call with Erdoğan was enough for Putin to call off sanctions against Turkey.

On July 26, Deputy Prime Minister Mehmet Şimşek and Economy Minister Nihat Zeybekci held talks with Russian authorities in Moscow and announced that negotiations on the removal of embargo on Turkish goods had begun.

Restrictions on tourism and unilateral visa obligations for Turkish nationals are among the important issues addressed during the summit. Erdoğan announced that they will work to reestablish visa free travel between two countries. Due to the prohibition of charter flights and package tour sales to Turkey, the Turkish tourism sector's losses reached $840 million in the first half of the year. At the same time, the number of Russian tourists visiting Turkey in the first half of 2016 plummeted to 184,000 with an 87 percent downfall compared to the same period last year.

On July 1, Putin signed a decree on the removal of the prohibition of charter flights and package tour sales to Turkey and the Russian government announced that works were initiated to this end.

One day after Putin's statement, package tour sales to Turkey started again, with Turkish holiday spots regaining their position as one of the most popular tourist destinations for Russian tourists.

A couple of weeks ago, Russian deputy Prime Minister Arkady Dvorkovich said the visa restrictions between Turkey and Russia might be lifted if a certain security level was ensured. Following Erdoğan's visit, works in these areas are expected to gain momentum and move toward pre-crisis levels again.

Cooperative efforts in energy, especially natural gas trade; in particular, the Turkish Stream natural gas pipeline project and the Akkuyu Nuclear Power Plant project stand out as some of the most critical issues between Turkey and Russia.

According to data from the Energy Market Regulatory Authority (EPDK), Turkey imported 27 billion cubic meters of natural gas from Russia in 2015. The Turkish Stream pipeline project is expected to play a crucial role in energy imports. If the project is completed, Turkey aims to purchase 15.7 billion cubic meters of Russian natural gas per year through the pipeline which will be constructed through the Black Sea. Moreover, a second pipeline that is planned to be constructed will carry Russian natural gas to southeastern Europe through Turkey.

Russian Energy Minister Alexander Novak announced that negotiations with Turkey on the Turkish Stream project have been reinitiated.

The Akkuyu Nuclear Power Plant project, which will be a first of its kind in Turkey, is being actualized by Russia with a budget of nearly $25 billion.
RELATED TOPICS