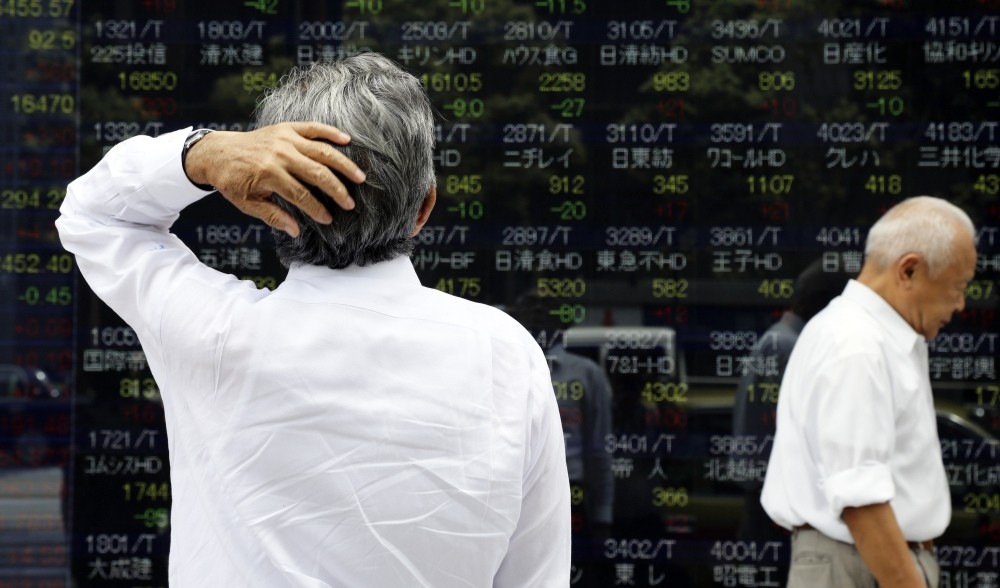 Japan's economy barely grew in the April-June quarter, as weaker exports and business investment weighed on the faltering recovery, adding to pressure on the Bank of Japan to take further action

Data indicated that Japan's economy stalled in the April-June quarter, causing it to miss market forecasts and rekindling worries about the government's faltering bid to stoke a recovery. Growth in the world's third largest economy was flat at 0 percent growth in the quarter, falling below economists' expectations of a modest 0.2 percent expansion, as weak exports and a fall in business spending dented activity. The economy expanded by a slight 0.2 percent on an annualized basis in the latest period, well below expectations of a 0.7 percent rise and a 1.9 percent growth rate for the first quarter of the year. Japanese officials are under growing pressure to deliver as economists are increasingly writing off Prime Minister Shinzo Abe's years-long bid to cement a lasting recovery, dubbed "Abenomics."

"This data are quite disappointing," said Junko Nishioka, chief economist at Sumitomo Mitsui Banking. "The situation is becoming tougher and tougher. There is the rally in the yen and worries about Japan's prospects in overseas markets. And so companies are becoming more pessimistic about making investments."

Inflation dropped for a fourth straight month in June, delivering a fresh blow to Abe's war on deflation. Business confidence has slumped to levels last seen when he swept to power in late 2012 on a ticket to fire up an economy beset by years of falling prices and weak growth. Tokyo recently announced a whopping 28 trillion yen ($276 billion) package aimed at kick-starting growth, after Britain's June vote to quit the European Union sent financial markets into a tailspin and sparked a yen rally. The second quarter drop in business spending comes as the strong yen threatens corporate Japan's bottom line - aggravating broader concerns about growth. Investors tend to buy Japan's currency as a safe bet in times of turmoil or uncertainty. But it makes Japanese exporters less competitive overseas and hits profits at Japan, Inc. The problem was highlighted recently when many of the county's best-known firms, including Sony and Toyota, reported lower profits in the second quarter.

Abe's plan - a mix of massive monetary easing, government spending and red-tape slashing - initially brought the yen down from record highs and set off a stock market rally. But promises to cut through red tape have been slower, and Abe's plan to buoy Japan's once-booming economy has looked increasingly unrealistic. His spend-for-growth policies have set Japan apart from some of its rich nation counterparts, including Germany which has been reluctant to endorse them, seeing it as an ineffective way to stimulate the economy.

Abe reshuffled his cabinet in early August after easily winning upper house elections, and vowed to speed up his battle with deflation. The Bank of Japan's (BoJ) massive monetary easing campaign is a cornerstone of plans to boost prices. The central bank disappointed markets at its late July meeting when it opted to leave its 80 trillion yen annual bond-buying program unchanged, amid worries that expanding the scheme could spark volatility in Japan's debt markets. The BoJ also held off cutting interest rates deeper into negative territory.

Negative rates are meant to encourage lending to people and businesses by effectively charging banks to keep their excess reserves in the BoJ's vaults. But commercial banks have complained they are eating into their financial results. Japan's growth data are likely to heap pressure on the BoJ to act when it meets next month, analysts warn.

"Japan's economy stagnated in the second quarter," said Marcel Thieliant, from the research house Capital Economics. "Adding in the deflationary impact of the stronger yen, underlying inflation should moderate further in coming months, increasing the pressure on the BoJ to provide more monetary easing."
RELATED TOPICS