Economy minister: Turkey attracts $8B prior to new incentive system 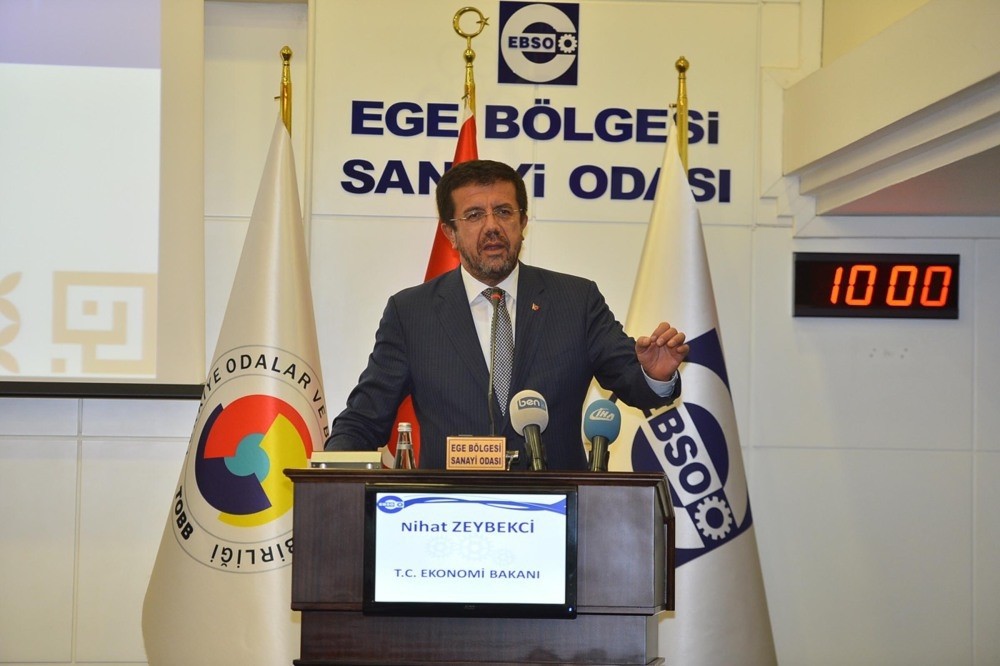 In line with work to explain Turkey ‘s actual potential along with a new incentive system, Economy Minister Zeybekci said Turkey is about to receive the first fruitful results with investment of $8 billion

Economy Minister Nihat Zeybekci said ministry officials have been holding talks with a foreign technology giant operating in the energy and health sectors regarding a new incentive system that, despite halting investment plans in two other countries, has investment potential in Turkey which could reach $8 billion. Minister Zeybekci said, "We will all see such inclinations towards Turkey," referring to investment potential of the incentive system.

According to Zeybekci, the ministry has initiated programs in an attempt to show Turkey's investment potential to international investors in a better way since the Gülen Terror Group (FETÖ) coup attempt of July 15. A delegation is set to visit the Netherlands and Italy next week as part of the initiative that includes visits to a total of 26 countries and campaigning that has already been launched in 16 countries worldwide.

The programs will also offer an opportunity to share information about the new incentive system, which aims to attract international investors to Turkey. Zeybekci said that Turkey must share these initiatives with the entire world in the fall, adding: "Last week, we held a meeting with the world's technology giants in Istanbul. When we spoke about the new incentive system to the CEO of one of these companies, he decided to stop all his investment plans in two countries. The company's investments, which we are working to bring to Turkey, will reach around $8 billion."

The company in question develops technology for the energy and health sectors. Stressing that Turkey, as a whole, will see inclinations towards investment in the future, Zeybekci said that the country must develop and transfer domestic technology.

Zeybekci spoke to Anadolu Agency (AA), saying that they are examining incentive systems currently implemented in Japan, Germany and South Korea, adding that these countries develop special incentive systems with respect to strategic products and certain industries in the main headings of energy, raw materials and technology based on their capacities and locations.

According to Zeybekci, incentives will be specially designed for every company and will offer a range of assistance on a broad spectrum, such as fixed taxes, withholding taxes, insurance premiums and energy costs. As part of the new incentive mechanism, the operations of international companies to invest in Turkey will be facilitated through infrastructure work on the construction of railways, highways and ports. The incentive system will also include innovative assistance, such as providing wage support to senior professional staff, granting land for free and providing interest rate supports to companies.

Stressing that they will "know no bounds in incentives" when it comes to predetermined strategic sectors, Zeybekci said they might also go beyond incentives and offer partnerships to some companies. Accordingly, the Treasury will be able to form a partnership with companies with a maximum share of 49 percent. The state will not interfere in company management, and the Treasury's share will be sold to the company at the end of a five-year period. If the company is not willing to purchase the share, it will go public on the Istanbul stock exchange (BORSA).

The incentive model, which will be a first in Turkey, will be implemented in sectors such as metallurgy, petrochemicals, defense, pharmaceuticals, health technologies, renewable energy technologies and technical agriculture. Within the framework of a study to be conducted under Prime Minister Binali Yıldırım's leadership, the model will be put into practice in areas that are considered to be critical for Turkey. The incentives will be offered to companies that are willing to invest in the sectors in which Turkey has plans in accordance with Turkey's needs.

Eximbank opens up to the world

Zeybekci stated various incentives will be launched regarding exports in the coming days, adding that the financing funds and opportunities of Türk Eximbank, Turkey's official export credit agency that provides major export incentive instruments, will be increased. He emphasized that they will resolve the problem with collaterals regarding access to the resources of Eximbank.

Currently, Eximbank requests 100 percent collateral for the loans it provides. The new system will reduce this rate to zero and enable Eximbank to provide loans to reliable companies in return for collateral that varies between 0 percent and 75 percent.

Additionally, an "export loan guarantee fund" will be established for small-sized exporters that cannot gain access to loans due to collateral problems. Eximbank will be able to support projects and purchases in other countries, as well. The new system will offer loans in a way similar to Germany's Hermes and the U.S.'s Exim loans.

According to Zeybekci, for the first time, Eximbank will start supporting foreign companies that purchase Turkish products overseas. For instance, if a Spanish company purchases $1 billion in goods from Turkey, the state will offer to provide loans with appropriate interest rates on the condition that the country continues to purchase Turkish goods. Furthermore, for example, Turkey will grant incentives to an African flour plant or a company operating in the technology sector under the condition that it buys Turkish machinery. If problems are encountered related with the insurance of imported products, Eximbank will insure them. In the event that Eximbank incurs any losses as the result of these transactions, the Treasury will cover some of the losses.

Similar incentives will be offered for building contracting projects and infrastructural projects, especially in African countries, and will be financed by Eximbank, providing that they are undertaken by Turkish contracting companies. After an operation plan is set for such projects, they could be sold in the international market.

Zeybekci noted that the Turkish Sovereign Wealth Fund (SWF), which is currently being established, would play an influential role in the process. Responding to criticism regarding the fund's resources and supervision, Zeybekci stated that there are misconceptions regarding the fund's resources, supervision and facilities. He said, "The SWF is being built on a structure that is subject to international audits and that will allow Turkey to directly procure foreign facilities and resources; thanks to its credibility and prestige as a brand." The draft bill on the SWF has been approved by the Parliamentary Planning and Budget Commission and awaits parliamentary approval now. "With SWF practices, we will prove our point within a few months," the minister concluded.
Last Update: Aug 20, 2016 1:36 am
RELATED TOPICS