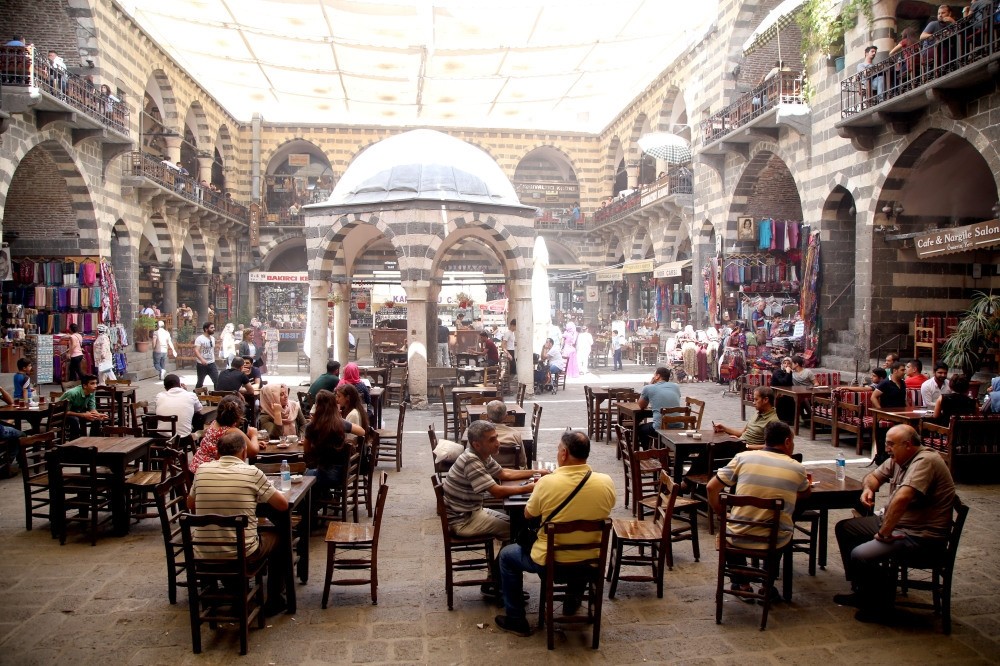 This file photo shows a group of artisans sitting in a bazaar in Sur, Diyarbaku0131r. The recently announced investment and development initiative is causing quite a stir in the business world.
by Daily Sabah Sep 07, 2016 12:00 am

Regarding the package aimed at investments and development in the eastern regions of Turkey, the business world agreed that the package will raise the welfare in the region, leading many firms to make investments

The recently announced investment and development initiative regarding Turkey's eastern and southeastern Anatolia regions proposed by Prime Minister Binali Yıldırım is causing quite a stir in the business world. Speaking to Anadolu Agency (AA) about their satisfaction regarding the details and infrastructure of the project which includes agricultural, health and economic developments in the Anatolian regions, prominent figures from the business world said that the recently announced investments in the region could lead them to shift their future investment goals to these regions. Eczacıbaşı Holding Chairman Bülent Eczacıbaşı said the package will increase the employment rate and financial investments in these regions, which are two of the most important and fundamental macroeconomic goals of Turkey.

Stressing that these goals will contribute to Turkey's welfare and improve the quality of life for the citizens of these regions, Eczacıbaşı said he is hopeful that these regions will come to the fore with their economic breakthroughs from now on.

In addition to the program, new job opportunities will be created in the said regions and are expected to employ roughly 40,000 people yearly, leading to important gains in the short term and midterm, Eczacıbaşı said, stressing that the employment rate will only increase as a result of the new investments.

According to Eczacıbaşı, the incentives presented with this package, coupled with the fact that the private sector makes up more than 60 percent of Turkey's TL 140 billion total investments, spell a substantial increase in the national income and lessen the nation's dependency on revenue from the private sector: "As long as investments and employment increase, Turkey's economy will grow, and as long as the economy grows, Turkey will continue to develop in a sustainable way," Eczacıbaşı said, suggesting that all these steps will gradually increase the attractability factor of the target areas for the investments, helping the region attract new and more diverse investments.

Noting that such a large and attractive investment program will be implemented in Turkey for the first time, Zorlu said this investment will turn this region into a center for attraction which will improve the economic status of Eastern and Southeastern Anatolia and ultimately eradicate terrorism from the region. "There is no terror in Europe because it has strengthened its economy," Zorlu said. "A TL 140 billion worth investment is in talks. When terror in the region disappears, additional investments will arrive as well, and when the region becomes an attraction center, investments will come from all around the world. The incentives are sufficient."

Akfen Holding Chairman Hamdi Akın, on the other hand, said that this package is unlike any other packages announced for the past ten years because it is more radical and applicable, stressing that the investor profile should be selected cautiously.

Suggesting that revenue obtained from this package should be spent on growth and new investments and not on terror activity, Akın said it should function as an incentive package backed by both Turkish and Kurdish people, therefore eliminating the safety problems associated with PKK terrorist activity in those regions.

Akın said the package will enable many firms to move to Eastern and Southeastern Anatolia, suggesting that several companies working for the state and possessing guarantee of payment will go there so as not to lose their markets. When asked whether they would consider manufacturing in Eastern and Southeastern Anatolia after the incentive package is realized, Akın said: "I am leaning towards an incentive package for the first time."

Kibar Holding Chairman Ali Kibar said it is the right model to make, stressing that the projects should be carried out in a safe and controlled manner while Kadooğlu Holding Chairman Tarkan Kadooğlu said this is the first time he saw such a detailed, systematic and self-aware package.
RELATED TOPICS