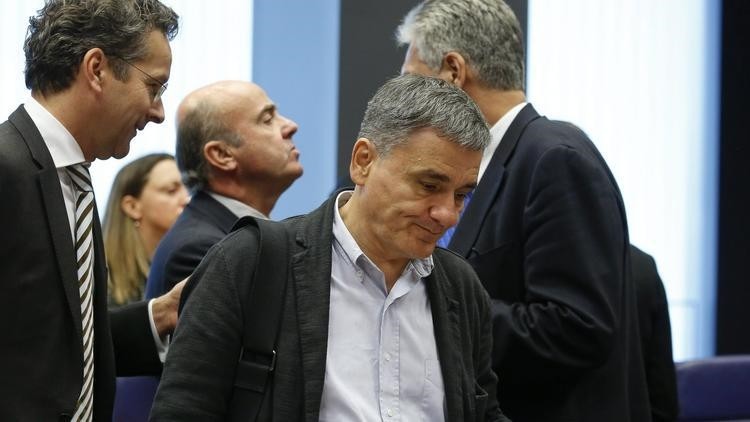 President of Eurogroup, Jeroen Dijsselbloem (L) and Greece's Finance Minister Euclid Tsakalotos (R) at the start of the Eurogroup finance Ministers meeting in Luxembourg on Oct. 10. (EPA Photo)
by Oct 10, 2016 12:00 am

Eurozone ministers on Monday unlocked 1.1 billion euros ($1.2 billion) for Greece from its huge third bailout after it delivered the necessary reforms, but held back more funds amid doubts from Germany.

Greece's creditors are withholding another 1.7 billion euros over Athens's mountain of unpaid bills, with the eurozone demanding more data before approving disbursement.

"Greece has completed implementation of all 15 (reforms) for the first review. This paves the way to disburse 1.1 billion euros," said Jeroen Dijsselbloem, the head of the Eurogroup of 19 eurozone finance ministers meeting in Luxembourg.

Greece won an 86 billion euro bailout after crisis talks in July 2015, its third since it was engulfed by debt in 2010.

"We hope before the end of October, the data will be available and on that basis we could decide on disbursement of 1.7 billion euros, that is also good news," added Dijsselbloem, who is also Dutch finance minister.

The split payment came after complaints by powerful Germany that Athens had still fallen short, but Dijsselbloem said Athens had delivered on reforms.

To satisfy Berlin, a statement from the Eurogroup of eurozone ministers urged Athens to properly deliver on details of the reforms.

The reforms, 15 in all, included the long-delayed launch of the new privatisation fund and reforms in the highly sensitive energy sector.

"The disbursement of the 1.7 billion euros which correspond to the repayment of arrears" will take place on October 24, said Greek Finance minister Euclid Tsakalotos, who added he was pleased with the result of Monday's meeting.

German finance minister Wolfgang Schaueble did not speak to reporters after the talks.

Greece is eager to win the bailout cash and complete a second review by the end of the year, which would then trigger talks on reducing the country's huge debt load.

Germany, which holds elections next year, is loath to forgive any of Greece's debt, but tackling the problem is a firm demand of rescue partner, the International Monetary Fund.

The Washington-based IMF, a key player in Greece's three bailouts, has said it won't give a penny to the latest one until it sees a concrete plan from the Europeans to substantially cut Greece's massive debt burden.

But the IMF and EU creditors disagree sharply on how much Athens can improve its finances through ongoing reforms.

"I wish the IMF remains what it is already, a structural player in this programme," EU Economics Affairs Commissioner Pierre Moscovici said.

Athens said last week that Greece's debt will grow to 315 billion euros ($351 billion) or 178.9 percent of output this year.