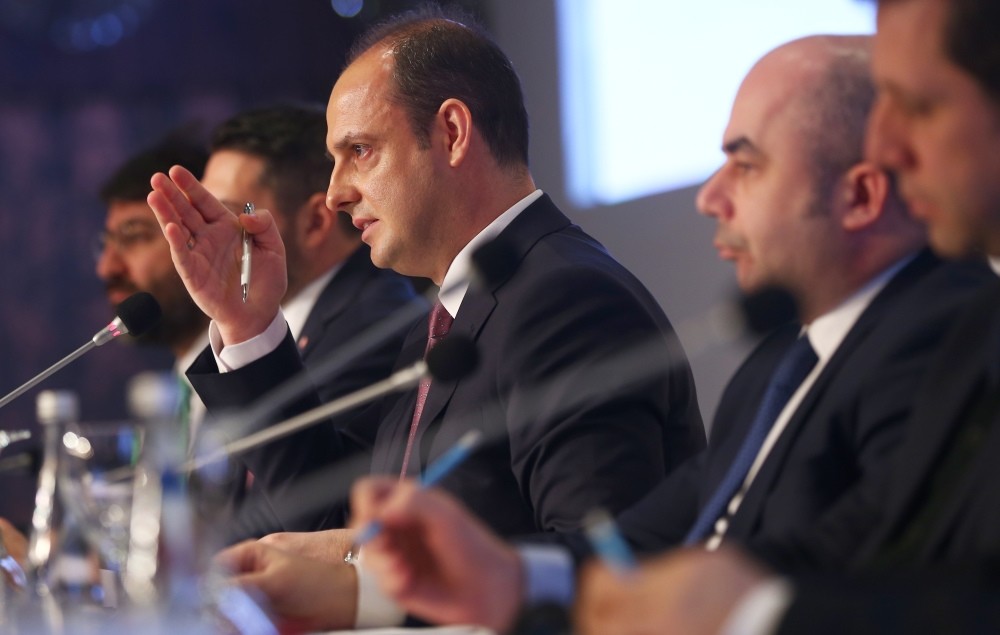 CBRT Governor Murat u00c7etinkaya delivered a presentation at the meeting for the first inflation report of the year.
by Daily Sabah with AA Feb 01, 2017 12:00 am

The CBRT revised its prediction for the 2017 year-end inflation rate at 8 percent while keeping the inflation rate for 2018 at 7 percent. The bank also signaled it will use more liquidity tightening to stabilize the currency volatility, while highlighting its determination for simplification

The Central Bank of the Republic of Turkey (CBRT) has increased its year-end inflation prediction for 2017 to 8 percent from 6.5 percent, also vowing to use further tightening measures to curb the depreciation of the Turkish lira and stabilize inflation.

Speaking at a press conference at CBRT headquarters in Ankara to reveal the year's first quarterly inflation report, Governor Murat Çetinkaya said the 5 percent inflation target would be reached in 2019 and their year-end inflation prediction for 2018 was 6 percent, with 1 percentage point hike. 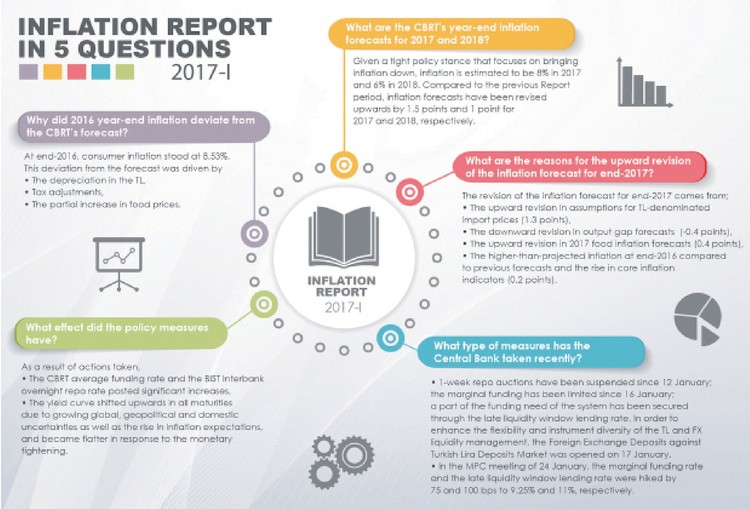 The inflation target range was revealed to be between 6.6 percent and 9.4 percent for 2017 and between 4.2 and 7.8 percent for 2018. He also increased the bank's food inflation forecast to 9 percent, up from 7 percent.

"In the upcoming period, monetary policy decisions will depend on the inflation outlook," he said.

Vowing to use all the measures within the CBRT's power, Çetinkaya said the bank can further tighten its monetary policy to stabilize the fluctuating currency rates and curb inflation.

The country's annual inflation rose to 8.53 percent in December from 7 percent in November, according to a report from the Turkish Statistical Institute on Jan. 3.

However, Turkey's overnight borrowing rate, according to which banks lend or deposit money in the central bank, remained unchanged at 7.25 percent. The one-week repo rate, known as the policy rate, was also kept at 8 percent.

The Turkish lira has lost more than 20 percent of its value against the greenback since last November. On Jan. 12, 2017, the central bank ceased to hold one-week repo auctions. As of Jan. 16, it has been meeting the part of funding needs of the system through the interest rate set for the late liquidity window, following the limits introduced on the marginal funding.

With regards to these dynamic monetary policies, Governor Çetinkaya stated that the bank closely follows the reflections of these measures. He further confirmed that the yield curve presented an upward movement due to the global, geopolitical and local uncertainties and rise in the inflation forecasts, but has become steady with the recent measures by the bank.

The CBRT governor also drew attention to the fact that the bank prefers to implement a simplification policy, indicating that there was no change in the theoretical approaches of the bank toward simplification.

Pointing out that the bank also kept rates steady last December, Governor Çetinkaya confirmed that his institution has not diverged from its simplification policy, despite many global and local shocks that transpired throughout 2016.

In line with the simplification policy, the CBRT decreased the interest rates in the upper band of the interest rate corridor, taking initial conventional tightening policies since 2008. Facing increasing volatility in foreign currency, the bank implemented a liquidity tightening policy that contains dynamic and different liquidity tools. Although simplification policy increases the effectiveness of transfer mechanisms, but does not exclude such dynamic reactions, the governor noted.

He claimed the bank has accomplished most of its simplification goals, drawing attention to the over-volatility in the foreign currency despite the fact that there was no change in macroeconomic framework and economic data. Therefore, it faced a risk that could jeopardize not just price stability, but also financial stability.

Çetinkaya underscored that simplification steps will continue in the upcoming period, once the risk premiums decrease and the volatility fades away. He, however, added that the tightening policy is likely to continue unless the inflation is controlled, permanently and seriously.
RELATED TOPICS