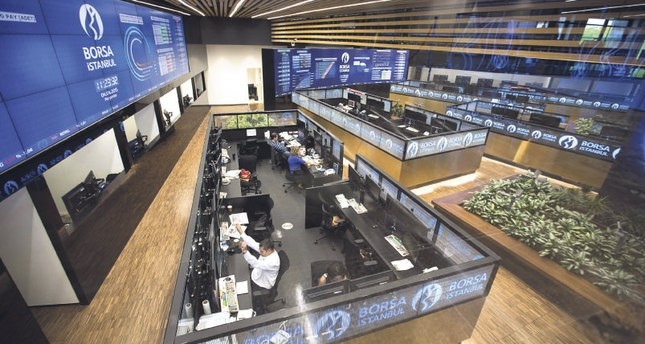 by Daily Sabah with AA Feb 02, 2017 12:00 am
While the stock market invests provided the best monthly gain in about three years with an average return of 10.4 percent in January, the domestic market recently returned positive.

With a rapid rise in recent days, Borsa Istanbul's BIST 100 Index ended the long-term downtrend that has been in effect since January, while exchange rate and interest rates also declined.

The stock market, which provided an average 10.4 percent return to investors in January, recorded its strongest outcome since March 2014.

The BIST 100 Index also outperformed the long-term downtrend starting at 91,806 points on Jan. 28, 2015, just two years after a rapid increase, which has been in effect since the beginning of the year.

The index could not outscore the downward trend, which began two years ago, with the upward trend in the first four months of 2016, and has since entered a tightening that will ensure that almost all averages have been collected at 77,700 levels since the said date. The index, which surpassed this tightening in the first week of 2017, has exceeded 86,000 points with an acceleration of a two-year downward trend resistance.

Analysts stated that Turkish lira assets negatively diverged from other emerging market assets in general in 2015 and 2016, and a positive trend has begun for Turkey following negative developments and downgraded country ratings by international credit rating agencies, marking a conclusion to negative expectations with regards to the country.

Analysts also noted that it would not be surprising if the BIST 100 Index tests over 90,000 levels.

Foreign currencies have started to depreciate with the entry of foreign investors who believe that Turkish investors and Turkish lira-denominated assets embrace high potential for the middle and long-term rise, as opposed to the evaluations of credit rating agencies, and net purchases at the BIST are moving upward, analysts noted. The number of foreign investors entering the Turkish financial market in January has reached a record high, which has not been observed for a long time.

In case the support level in the dollar/Turkish lira parity, which is currently 3.75, is broken, the dollar will continue tumbling against the Turkish lira and parity will reach the 3.50-3.60 level. Analysts also noted that the liquidity tightening steps of the Central Bank of Republic of Turkey (CBRT) as well as the depreciating demand in the auctions of foreign currency depo against the Turkish lira, which was construed as a swap in the market, also ceased the upward movement of the exchange rate.

Explaining that the liquidity tightening policy of the CBRT decreased the currency volatility, analysts noted that the yield curve of government debt securities presented a steady movement. The difference between the five-year maturity bond yields and the overnight repo interest rate has been steadily lagging since Jan. 12, and 10-year bond yields hit the lowest level in the last two-and-a-half months on the last day of January.
RELATED TOPICS