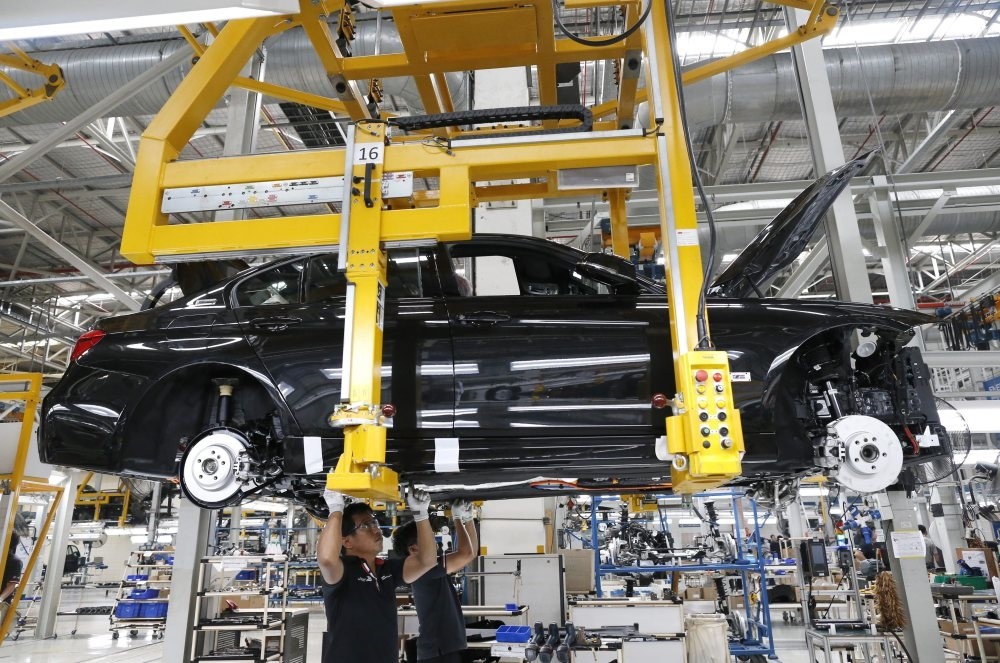 Recent surveys reveal that global economic growth has garnered momentum both in emerging and developed markets despite concerns stemming from the U.S. protectionism and Britain's negotiations for a post-Brexit trade environment

Factories across the world fired up - or at least kept up activity - in January with some registering multi-year output highs, just as a barrage of political risks threatens the global economy with potential harm.

Rising protectionism from the United States, concerns over how Britain's negotiations on leaving the European Union will pan out, and national elections in Europe's largest economies all lie ahead.

But entering 2017, economic growth gathered momentum, according to surveys released yesterday, following on from last year thanks to a bounce in consumption.

Even in Britain, where a slump in sterling since the June referendum stoked the sharpest rise in factory costs on record last month, growth remained robust.

There were also signs of growth in Brazil, where industrial output rose in December at its fastest monthly pace in 2-1/2 years after one of the worst years on record.

"So far momentum is pretty strong heading into 2017," said Jacqui Douglas at TD Securities. "But political risks are definitely one of the biggest this year and given the surprises we had through 2016 it's really hard to tell what's in store."

Among unexpected events last year was Britain's vote to leave the EU and the election as U.S president of Donald Trump, both seen as the result of anti-establishment anger among voters who feel left out of the wealth of nations.

Signs of concern this may spread could be found on bond markets. The premium investors demand to hold France's government debt rather than that of similar economies shot up on so-called Frexit fears - the possibility that the far-right

National Front might win the presidential election and try to take the country out of the euro zone.

IHS Markit's final manufacturing Purchasing Managers' Index for the currency bloc rose to 55.2 in January from December's 54.9, its highest since April 2011. A Markit/CIPS UK factory PMI edged down to 55.9 from December's 2-1/2 year peak of 56.1, matching the consensus forecast in a Reuters poll. Anything above 50 indicates growth.

A similar survey for the United States due later yesterday is expected to show factories in the world's largest economy also increased activity.

A stronger dollar helped major economies such as Japan, where export orders surged, Markit/Nikkei PMI numbers showed, a welcome sign for the economy along with recent data suggesting a more durable recovery may be underway.

However, those encouraging signals sit uncomfortably with the growing threat from Trump's trade policies. Japan is moving to temper the risks with plans to show Trump its firms are ready to create U.S. jobs, according to a document whose contents were revealed to Reuters.

In export-reliant Asia, and other regions where global supply chains are closely interlinked, Trump's election is a particular risk to both world trade and broad economic growth if the new president follows though on his "America First" policies.

"I suspect there's going to be a lot of capital expenditure expansion projects that will be put on hold as long as the uncertainty surrounding the trade environment persists."

In China, the world's second-biggest economy, growth was led by an investment and construction boom that has helped spur global growth. Its official PMI stood at 51.3 in January, slowing marginally from 51.4 in December.

Analysts question whether Chinese growth will be sustainable once the impact of earlier stimulus begins to wear off and if the property market cools. They warn a slowdown in the Asian economic powerhouse could ripple across the region and beyond.

"Within China, we expect that real estate will slow down, because the government is quite keen to contain housing prices," said Louis Kuijs, head of Asia economics at Oxford Economics in Hong Kong.

Other regional economies like Indonesia showed positive momentum in manufacturing activity, while Indian factory activity returned to modest growth in January, bouncing from a contraction in December triggered by the government's scrapping of high value banknotes.

Even in laggard South Korea where manufacturing contracted for the sixth straight month, exports rose at the fastest pace in nearly five years.

"We remain quite cautious how much of an acceleration in growth we can see in this pretty challenging climate," Oxford Economics' Kuijs said.

"Things like PMI are timely indicators of the hard data but sometimes they do run ahead, and the improvement in actual data doesn't materialise."