Bank of England upbeat on growth, inflation worries some rate-setters 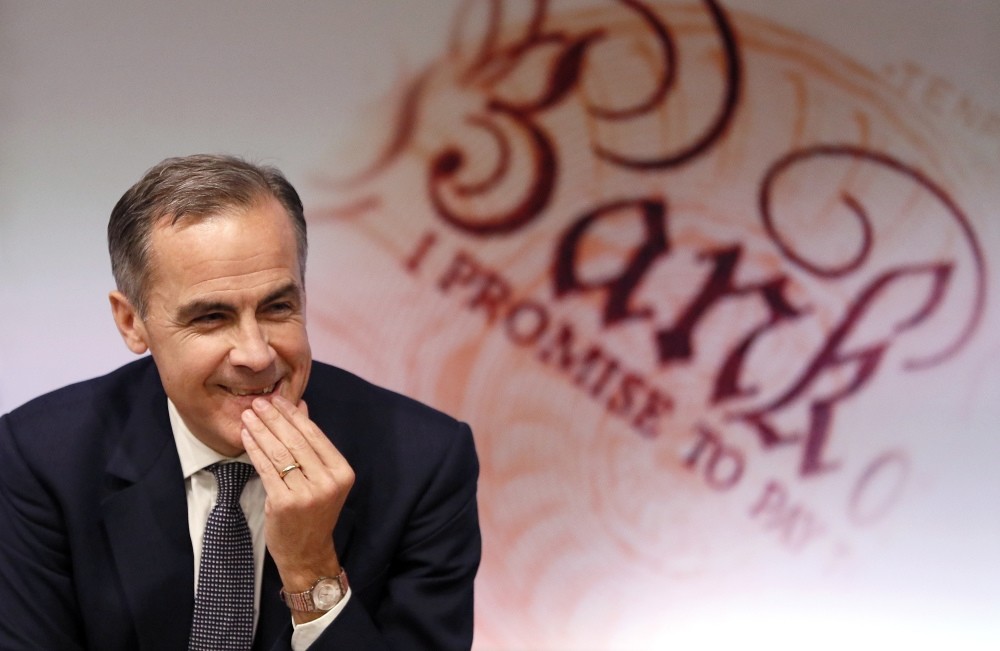 Mark Carney, Governor of the Bank of England smiles at a quarterly Inflation Report press conference at the bank in London Thursday.
by Feb 03, 2017 12:00 am

Raising the predictions for British growth, the Bank of England has joined the club of ‘wait-and-see' central banks before any interest rate hike, as the bank cautiously wait for the adventures of the Brexit journey

The Bank of England boosted its forecast for British growth in 2017 and some rate-setters were more nervous about rising inflation, but the Bank overall seemed in no rush to raise interest rates as the economy adjusts to the prospect of Brexit.

In a sign of a developing split, the BoE said some of its rate-setters had "moved a little closer" to their limits for tolerating an overshoot of the Bank's 2 percent inflation target, caused by sterling's slide since June's Brexit vote. But the BoE, announcing its latest quarterly thinking on Britain's economy yesterday, sent broader signals that it was comfortable with its record low interest rates. It said it now expected inflation would be slightly lower in two years' time than it did in November, a key yard-stick.

Significantly, the BoE also said its rate setters now believed the unemployment rate could fall to 4.5 percent - down from its previous estimate of 5 percent and below the current rate - before it starts to push up inflation. That could give the Bank more margin to keep rates at their record low for longer and may be useful as it announced the second big increase in three months to its forecast for economic growth in 2017.

BoE Governor Mark Carney said the boost to the central bank's growth forecasts did not mean June's vote to leave the European Union would be without consequences. "The Brexit journey is really just beginning. While the direction of travel is clear, there will be twists and turns along the way," Carney said at a news conference after decision.

Sterling initially rose on the announcement by the Monetary Policy Committee but quickly fell back and British government bond prices rose, suggesting investors were pushing back their bets on when the BoE might raise rates. "On the whole the Committee doesn't appear to be poised at all to change the stance of policy," Philip Shaw, an economist with Investec, a bank, said. Carney and his fellow policymakers were wrong-footed by the resilience of Britain's economy last year following the referendum decision in June to take the country out of the European Union.

Britain's growth in 2016 was stronger than in any other Group of Seven big rich economy, confounding the BoE's pre-referendum warnings of a quick Brexit hit to the economy. The BoE said it now expected economic growth of 2.0 percent this year, higher than economists had predicted and up a lot from its previous forecast of 1.4 percent.

The new 2017 outlook towered above the forecast of 0.8 percent growth made by Bank in the weeks after the Brexit vote, when the economy seemed to be heading for a recession and the BoE cut interest rates to a record low of 0.25 percent. Since then, Britain's consumers have carried on spending and finance minister Philip Hammond has relaxed the country's austerity drive.

Growth forecasts for 2018 and 2019 were raised by a moderate 0.1 percentage points in each year, and the Bank said it still expected rising inflation to cause household living standards to start stagnating at the end of this year. The outlook for Britain's economy remains highly uncertain for political reasons too, related to Brexit and U.S. trade.RATES ON HOLD, NO NEW QE

The BoE said its policymakers had voted 9-0 to keep rates on hold at 0.25 percent. Carney said that did not mean it would necessarily stay that way at future meetings.

The Monetary Policy Committee also decided unanimously to let its latest, 60 billion-pound phase of British government bond purchases close on schedule later this month. It made no change to its smaller corporate bond buying programme.

The BoE to stuck to its announcement in November that it its next policy move could be a rate hike or a cut, reflecting the uncertain outlook for the economy.

Before yesterday's announcement, financial markets had been pricing in a roughly 50-50 chance of a rate hike by the BoE this year. But most economists said it would probably not happen until mid-2019, when Britain is likely to have left the EU.

The Bank reiterated its view that there were limits to how much it would tolerate inflation shooting temporarily above its 2 percent target. Some MPC members appeared to be getting more anxious about the building inflation pressures.

"For some members, the risks around the trade-off embodied in the central projection meant they had move a little closer to those limits," the Bank said in a sum-up of the most recent debate amongst its policymakers. The BoE now expects inflation to peak at 2.75 percent in mid-2018 although many economists say it will exceed 3 percent.