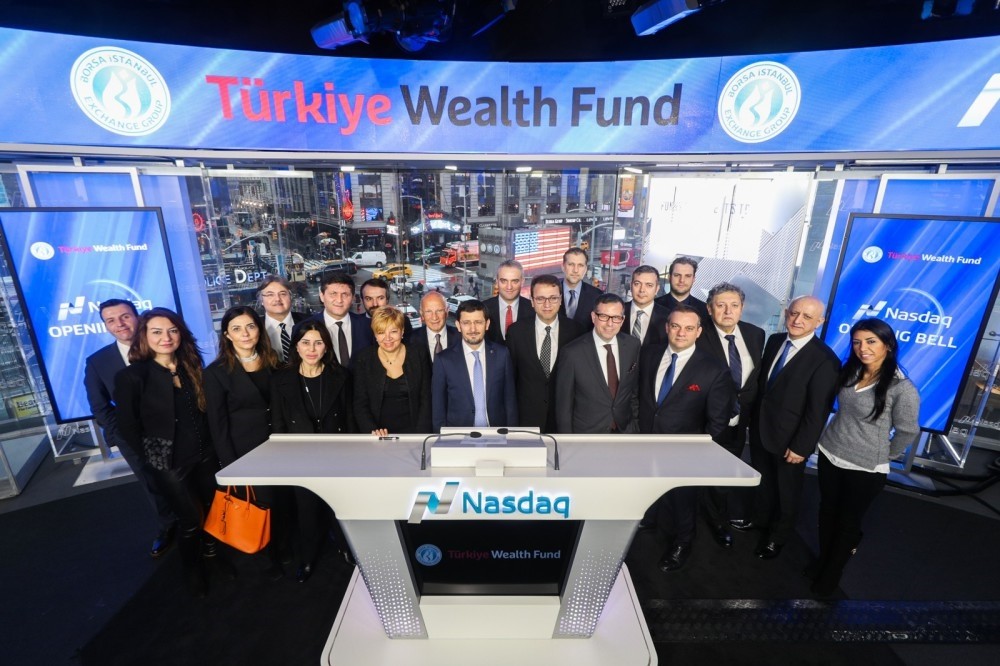 On Jan. 24, the Nasdaq session began with the gong rang by Borsa Istanbul CEO Himmet Karadau011f and Nasdaq Vice President David Wicks in celebration of Turkey's SWF.
by Daily Sabah Feb 08, 2017 12:00 am

The recently established Turkish Sovereign Wealth Fund has been a topic of hot debate since the weekend, when Treasury shares of major state-run companies were transferred to the fund. Yet, SWFs are a widely applied phenomenon across the world, boosting and stabilizing economic development

Since the weekend, Turkey has been caught up in a major topic of discussion. The transfer of treasury shares of major state-run companies, state-lenders and landmark national carrier Turkish Airlines (THY) has ignited curiosity, raising questions regarding the operational structure of the institution, despite the Sovereign Wealth Fund (SWF) being a worldwide phenomenon existing in more than 50 countries with a total value of $7.4 trillion.

The U.S.-based SWF Institute defines the concept as a state-owned investment fund commonly established from the balance of payments surpluses, official foreign currency operations, the proceeds of privatizations, governmental transfer payments and fiscal surpluses. The Organization of Economic Cooperation and Development (OECD) lays out the structure of SWFs as pools of assets which are managed directly or indirectly to achieve national, macroeconomic objectives.

If the source of the fund is a saving surplus, there are two types of funds: commodity-based, which are funded through the proceeds of exports such as oil, as is the case in Norway, Saudi Arabia and Kuwait. There are also non-commodity funds financed by the transfer from official exchange reserves via the respective central banks in countries such as China, Hong Kong and Singapore.

Despite these funds having raised concerns regarding transparency, financial stability, corporate governance and political interference, their increasing importance around the world has been acknowledged. These funds facilitate the saving and intergenerational transfer of proceeds from nonrenewable resources and allow for greater portfolio diversification. Moreover, SWFs provide a more efficient allocation of revenues from commodity surpluses or its main sources, enhancing market liquidity, particularly in times of global financial distress.

SWFs across the world are considered as effective tools for stabilization;particularly when it comes to economic stabilization and goals to insulate the budget and the economy against commodity price swings. A report prepared by the Foundation for Political, Economic and Social Research also demonstrates that SWFs function both as a tool to provide financial means for investments that will boost the economic growth and as a guarantee of sustaining financial stability. The report shows that global SWFs grew by 21.5 percent from 2010-2015 and an additional 21 funds will be founded by 2020, ultimately securing $15 trillion in volume in SWFs around the world.

A successful example of sovereign wealth funds, the Government Pension Fund of Norway, which changed its name to the Petroleum Fund of Norway, holds $885 billion. The purpose of the petroleum fund is to invest portions of the large surplus generated by the Norwegian petroleum sector, which comes mainly from company taxes but also from payment for exploration licenses as well as the State's Direct Financial Interest and dividends from the partly Norwegian state-owned oil and gas company Statoil. The current revenue from the petroleum sector is estimated to be at its peak and is expected to decline in the coming decades. The SWF therefore aims to counter the effects of the forthcoming decline in income and to weather the disruptive effects of fluctuating oil prices.

According to information provided on the SWF's website, these funds generated an annual return of 5.6 percent from the establishment of Norges Bank Investment Management in 1998 to the end of 2015, measured in the fund's currency basket. After management costs and inflation, the return in local currency was 3.7 percent while the return in dollars was 5.8 percent.

With regards to Turkey, the SWF will give momentum to real sector investments, which are the crucial locomotive of development, by providing financial support to strategically important mega projects. Therefore, the resources of the SWF will be deployed to maintain high and sustainable growth rates and pave the way for economic stabilization.

The financing of capital-intensive and strategic sectors, especially the industries of national defense and high-tech production, can be achieved with the Turkish SWF, which is expected to lighten the burden of lenders and bring megaprojects to the public sector. In this way, the new system will contribute to Turkey's economic growth by providing new employment opportunities while reducing dependency on foreign actors and encouraging development in strategic areas, thus paving the way for domestic and national sectors to grow. With the unused funds and real estate owned by the public, the Turkish SWF is expected to reach TL 200 billion in the near future.

The financing of capital-intensive and strategic sectors, especially the industries of national defense and high-tech production, can be achieved with the Turkish SWF which is expected to lighten the burden of lenders and bring megaprojects to the public sector. In this way, the new system will contribute to Turkey's economic growth by providing new employment opportunities while reducing dependency on foreign actors and encouraging development in strategic areas, thus paving the way for domestic and national sectors to grow. With the unused funds and real estate owned by the public, the Turkish SWF is expected to reach TL 200 billion in the near future.

are trasnferred to SWF?Treasury shares in key state-run institutions including lender Ziraat Bankası, stock exchange market Borsa Istanbul, the General Directorate of Post and Telegraph Organization (PTT), the Petroleum Pipeline Corporation (BOTAS), national petroleum producer Turkish Petroleum (TP) and national satellite operator TURKSAT were sold along with 6.88 percent of the Treasury's shares in a major telecommunication company TurkTelekom along with shares in the state-run official mining company Eti Maden and the General Directorate of Tea Enterprises (ÇAYKUR). All of the said shares have been transferred to Turkey's recently established Sovereign Wealth Fund, the Prime Ministry has said. Moreover, the Treasury's 49.12-percent stake in national flag carrier Turkish Airlines (THY) and 51.11 percent of shares in state-lender Halkbank have been transferred to the Sovereign Wealth Fund, the Turkish Privatization Authority said on Monday.
RELATED TOPICS