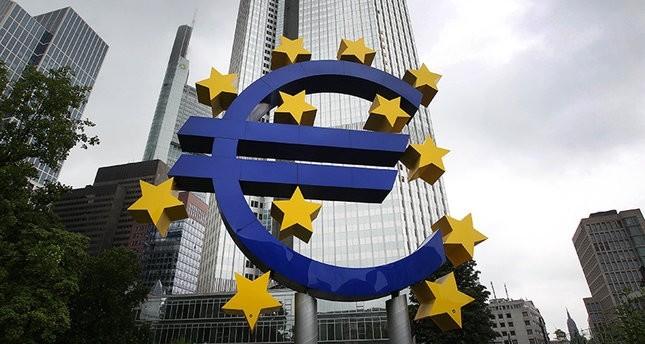 by Anadolu Agency Feb 21, 2017 12:00 am
The economy recuperation process in the 19 member eurozone has been felt more prominently since the end of the last year, according to the latest announced data. Moreover, some political and economic crises which manifested themselves last year in the eurozone economy, namely, slow economic growth, high unemployment, deflationary pressures and low consumer spending, stand out as the most important factors affecting economic performance in the region.

The regional economy of 19 member countries has seen a slow recovery process which has begun to show permanence since the end of 2016, as unemployment continued to decline and inflation rose slowly. Furthermore, the economic confidence index has increased and exports from the region continued to increase.

The eurozone economy grew by 0.4 percent in the last quarter of last year compared to the previous quarter, growing by 1.7 percent compared to the same period of 2015. The data indicates that the region has seen a positive growth performance for the first quarter of this year.

Moreover, the annual inflation in the eurozone in January of this year was measured as 1.8 percent. The annual inflation, which rose above market expectation, is estimated at 1.5 percent, increasing by 1.1 percent in December of last year.

In December 2016, for the first time in a long period, the inflation figures of the eurozone approached the "just below 2 percent but close to 2" target, aiming to achieve the price stability set by the European Central Bank (ECB), which is responsible for managing the monetary policy for the euro area countries. However, January inflation figures were even closer to the European Central Bank's inflation target.

Furthermore, the monetary union also experienced positive developments in foreign trade. In December 2016, with the seasonally adjusted figures, the eurozone's total exports reached 178.6 billion euros and imports increased to 150.5 billion euros, while the region had a foreign trade surplus of 28.1 billion euros. Moreover, the labor market also supported positive economic inclination. Unemployment in the region fell to 9.6 percent in December 2016, the lowest level since May 2009. According to the results of the European Commission's "Business and Consumer Survey" for December 2016, the Economic Confidence Index in the eurozone was 106.8 points in November but rose to 107.8 points in December. The index increased by 1.2 points during this period, exceeding the market expectation of 106.8 points.

The said developments indicate that the regional economy had a better start in 2017 and that recovery was stronger.

Political challenges will be on the agenda

In spite of the positive developments, some political and economic risks this year may undermine the favorable atmosphere in the regional economy. The rise of the extreme right, especially in countries like Germany, Austria, Belgium, the Netherlands and Italy, and uncertainties about the elections in some countries this year may affect the political stability and economic recovery in the regional economy.

The process that will take place after the U.K. decision to leave the EU and the protectionist policies of newly elected U.S. President Donald Trump stand out as primary concerns for the region.
RELATED TOPICS