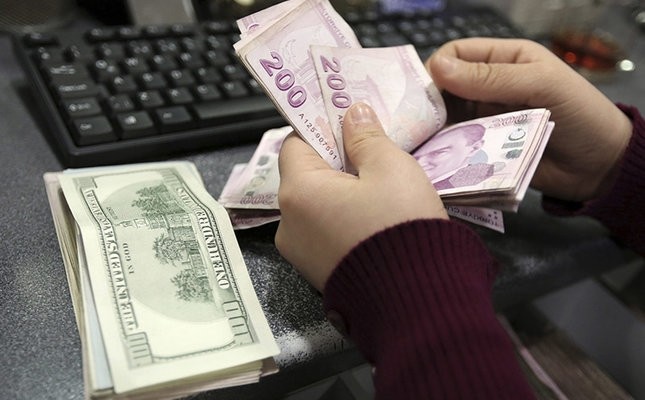 After the dollar saw the highest level of all times against the Turkish lira on Jan. 11, the Turkish central bank managed to support the lira by reducing the volatility of the exchange rates, which resulted in the lira appreciating by 8.3 percent against the dollar

The Central Bank of the Republic of Turkey (CBRT), which has been making proactive moves since Jan. 12, has apparently reduced the volatility in the exchange rates, as it became the most important actor in the Turkish lira's (TL) appreciation against the dollar by 8.3 percent. The CBRT's ongoing proactive moves started after the dollar peaked at an all-time high of 3.9422 on Jan. 11. Now, with decreasing demand for the dollar in global markets, the exchange rate has decreased to 3.61.Even though the U.S. dollar/TL parity stopped its downward trend starting at 3.94, with reactionary purchases at 3.75, later followed by 3.67, it continued a decline after the new moves by the CBRT.

Despite expectations that the Fed will hike interest rates, at least once in the first half of this year, with the macroeconomic data, which is better than expected in the U.S., coupled by Fed Chair Janet Yellen's statements, the ongoing risk appetite in the global markets ensured that attempts of an increase in the parity remained limited.

Analysts said that the steps taken by the CBRT during this period reduced the volatility of the exchange rates and supported the Turkish lira, and pointed out how the U.S. dollar/TL parity depreciated by 8.3 percent, in a downward trend from 3.9422 on Jan. 11, and saw 3.6132 today.

The Central Bank, which stated that the necessary measures would be taken against unhealthy price developments moving away from the economic bases with the increase in the volatility of the exchange rates in the first days of the year, began the interventions by reducing the borrowing limits of the banks to TL 22 billion ($6.06 billion) in the Interbank Money Market on Jan. 10.

The Central Bank, on the same day, announced that the foreign currency required reserve ratios were reduced by 50 basis points in all maturity segments, and that this change would provide an additional liquidity of approximately $1.5 billion to the financial system.

New intervention tools are in place

The CBRT, which did not hold the one-week maturity repo auction on Jan. 12 and moved to implement a tighter liquidity policy, has continued its stance for the last 28 working days. Mainly by directing policy-making banks to the "Late Liquidity Window (LLW)" during that time period, the Central Bank has increased the funding costs by about 200 basis points.

It also reduced the borrowing limits for banks in the Interbank Money Market, operating under the CBRT, from TL 22 billion to TL 11 billion on Jan. 13 and started the foreign exchange deposit market against Turkish lira deposits on Jan. 18.

It stated that the CBRT continued its auctions for foreign exchange deposits against Turkish lira deposits, which are evaluated as swaps in the markets. It prevented the speculative foreign currency demand with these moves. It has continued its one-week maturity auctions for foreign exchange deposit against Turkish lira deposits, which started with $300 million, with $1 billion since Jan. 27. While the aim is to bring back the Turkish lira that went abroad as a result of the swap agreements made through London, to the Central Bank, the exchange rate liquidity was also increased without making foreign exchange sales.

The Central Bank, which did not change its policy rate at the Monetary Policy Committee (MPC) meeting on Jan. 24, increased the upper band of the interest rate by 75 basis points and LLW by 100 basis points. The CBRT, which has kept the policy rate stable at 8 percent, raised the funding cost of banks from 8 percent to 10 percent today under its tight monetary policy.

Enabling the repayment of rediscount credits for export and foreign exchange earning services that were made available before Jan. 1, 2017 and was due on May 31, 2017 with the Turkish lira on the condition of paying on the date of maturity, the CBRT stated that the buying rate (USD/TL 3,5338) announced on Jan. 2 will be taken as the basis.

Noting that the Central Bank is taking different steps for each policy, because of the different processes of their monetary policy instruments and transfer mechanisms, Yılmaz said, "For example, the steps taken in exchange rate policy and interest rate policy need to be evaluated separately. Currency volatility is the issue of the Central Bank, as it both has an inflation-boosting effect and can reduce the forecasts of foreign trade authorities."

Recalling that the exchange rate volatility approached 25 percent in January, Yılmaz said, "The CBRT enabled banks to use dollar deposits against Turkish lira deposits by activating the swap mechanism, so that the banks could meet foreign exchange demands without changing the amount of reserve."

He said that as a result of this move, the volatility in the exchange rate showed up to a 13 percent recovery, adding that the LLW has been activated for price stability as part of tight liquidity policy, and that it has served as an important buffer against inflation, which is expected to hit double digits in March-June.

Highlighting that the policy interest rate, which is being kept at 8 percent, and the upper band of the interest rate corridor that has been raised to 9.25 percent with a limited increase, are technical adjustments that reflect the financial stability-supporting stance against the output gap in the economy. Yılmaz recalled that it was finally announced on Friday that the rediscount credits for exports can be paid in Turkish lira.