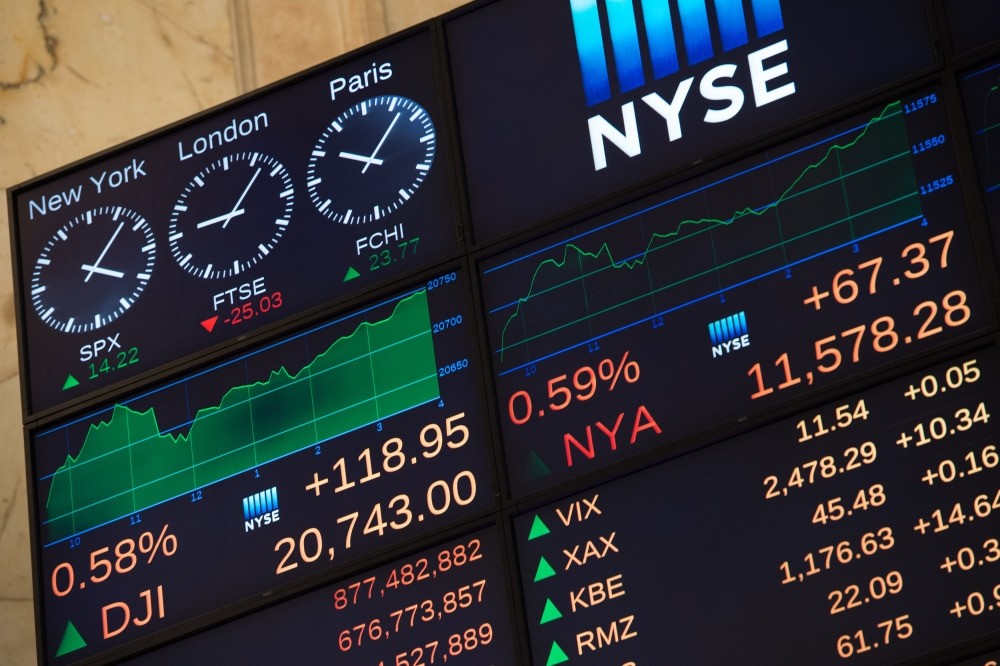 Global stocks soared to record highs and the dollar slipped after the minutes of the latest U.S. Federal reserve meeting showed policymakers in no hurry to raise interest rates.
by Feb 24, 2017 12:00 am

After the hawks of the U.S. federal reserve declared that they fore see an interest rate hike should the inflation and employment data come in line with expectations, the dollar slipped and the global stocks soared

World stocks held near record highs Thursday and the dollar eked out minimal gains after minutes of the latest U.S. Federal Reserve meeting showed policymakers in no big hurry to raise interest rates.

U.S. and euro zone government bond yields fell or held steady as the minutes did nothing to firm up expectations of a rate rise in March. That remains a slim prospect, with futures pricing in only an 18 percent chance, according to the CME Group's FedWatch tool.

The pan-European STOXX 600 stocks index was marginally higher and close to 14-month highs touched on Tuesday. A 4 percent fall in miner Rio Tinto and a fall of nearly 5 percent in EasyJet, which were among companies whose shares went ex-dividend, weighed on the index. Miners generally dipped as metals fell.

MSCI's broadest index of Asia-Pacific shares outside Japan edged up 0.1 percent, hovering near the highest level since July 2015 it hit on Wednesday. Earlier, the index lost as much as 0.15 percent.

Japan's Nikkei closed fractionally lower, as banks fell, and Australian shares ended down 0.4 percent. MSCI's world index also nudged higher and was within half a point of Wednesday's record high.

The minutes showed many Fed policymakers said it may be appropriate to raise rates "fairly soon" if jobs and inflation data met expectations. But they also highlighted deep uncertainty over President Donald Trump's economic program. Many in markets expect rates to rise in June.

The dollar edged up less than 0.1 percent against a basket of major currencies but held below highs hit on Wednesday, having fallen immediately after the minutes were released.

The euro, which has been buffeted by investor nerves over France's presidential election, to be held in April and May, was flat at $1.0556. The yen was also barely changed at 113.28. Sterling strengthened 0.2 percent to $1.2468.

Along with Trump's policies on taxes, spending and trade, markets have been trying to gauge his attitude to the dollar.

He said before his inauguration that the dollar's strength against the Chinese yuan was "killing us", raising concern in the "strong dollar" policy espoused by recent U.S. administrations could change.

However, Treasury Secretary Steven Mnuchin praised the strong dollar on Wednesday, telling the Wall Street Journal it reflected confidence in the economy.

Yields on 10-year U.S. Treasury bonds held steady at 2.415 percent, having fallen after the minutes. German equivalents, the benchmark for euro zone borrowing, edged up 1 basis point to 0.28 percent, having closed on Wednesday at 0.27 percent.

French 10-year yields fell 2 bps to 1.01 percent, reducing the premium investors demand to hold French rather than German debt, as the emergence of a centrist pact eased concerns over the upcoming election.

Francois Bayrou decided not to stand and struck an alliance with centrist candidate Emmanuel Macron, a move that is seen boosting Macron's chances. Far-right, anti-euro party leader Marine Le Pen increased her first-round lead, a new poll showed, but is still not expected to win the run-off.

Oil prices rose after data showed a decline in U.S. crude stockpiles as imports fell. Brent crude last traded at $56.56, up 72 cents a barrel. Prices have been rising since the Organisation of Petroleum Exporting Countries (OPEC) and other oil producers agreed output cuts last year.

"It's a battle between how quick OPEC can cut without shale catching up," said Tony Nunan, oil risk manager at Mitsubishi Corp in Tokyo. Copper fell almost 1 percent to $5,982 a tonne on concern about fresh regulation that could affect China's property boom.

Gold rose less than 0.1 percent to $1,238 an ounce, supported by uncertainty over the Fed rate outlook. Zinc and nickel also fell more than 1 percent.