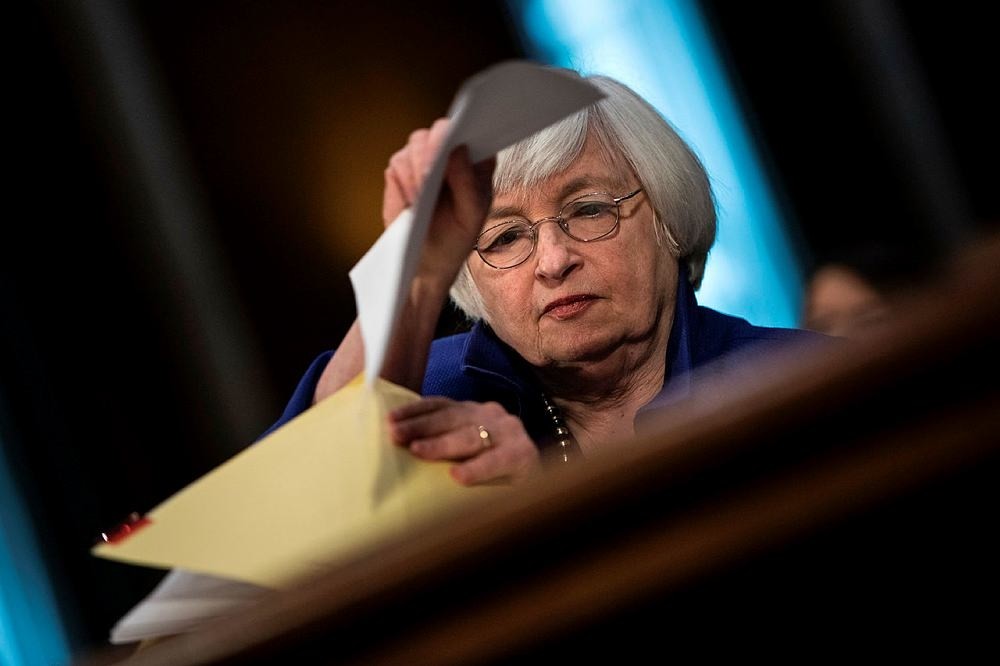 Federal Reserve Chair Janet Yellen signaled Friday an interest rate increase could be on the way this month -- if US employment and inflation remain in line with expectations.

Analysts interpreted that as a clear sign that the central bank will raise the benchmark lending rate at the March 14-15 policy meeting.

The Fed last raised the federal funds rate in December -- only the second increase in a decade -- but Yellen's comments confirm the expectation of another move following recent statements from other Fed officials.

The Fed's policy-setting rate committee "will evaluate whether employment and inflation are continuing to evolve in line with our expectations, in which case a further adjustment of the federal funds rate would likely be appropriate," Yellen said in a speech to a Chicago business group.

Ian Shepherdson, chief economist at Pantheon Macroeconomics, summed up Yellen's speech in one line: "They'll hike this month unless payrolls are disastrous."

The Fed will get to see one more employment report before they decide the direction of interest rates, when the Labor Department releases data for February on March 10, and will see two inflation reports the following week.

Yellen's comment that a March increase could be appropriate "is about as blunt a statement of near-term policy intent as we have ever seen from (the) Fed chair," Shepherdson said.

And "it means that the Fed will hike unless next week's payroll report is calamitous."

"In our view, this show of confidence in both domestic and external conditions suggests the committee is increasingly comfortable continuing to tighten policy further," they said.

However, Yellen said central bankers continue to believe they will only need to raise rates "gradually" assuming the economic data "continue to come in about as we expect."

"Those increases would keep the economy from significantly overheating, thereby sustaining the expansion and maintaining price stability," she said.

She cautioned that monetary policy "cannot be and is not on a preset course," although it is likely to happen faster this year than last.

In the face of some critics, even among Fed officials, who say the central bank risks allowing inflation to rekindle by raising rates so slowly, Yellen defended the committee's performance.

She acknowledged that waiting too long to raise rates could mean the Fed has to hike more rapidly at some point, which "could risk disrupting financial markets and pushing the economy into recession."

However, Yellen said, "I currently see no evidence that the Federal Reserve has fallen behind the curve."

Many economists have pointed to the Fed's preferred measure of inflation, which recently reached a targeted two percent annual rate, but Yellen noted that higher energy prices are contributing to that increase and could be temporary.

Fed officials in December projected three rate hikes this year, but in the wake of the 2008 financial crisis, the Fed's moves have been "at a slower pace than most FOMC participants anticipated in 2014."

Yellen said that "the ongoing expansion has been the slowest since World War II, with real GDP growth averaging only about two percent per year" because of "slower growth in the labor force in recent years... and disappointing productivity growth both in the United States and abroad."

But she once again cautioned that monetary policy cannot address all the ills in the economy, and it falls to Congress and the administration of President Donald Trump to take the appropriate steps.

"Fiscal and regulatory policies -- which are of course the responsibility of the administration and the Congress -- are best suited to address such adverse structural trends," she said, including the relatively worse economic circumstances for blacks and Hispanics, and slow productivity.

Asked after her speech about how expected tax and spending policies might figure into the Fed's outlook, Yellen said officials will wait until they know more about the composition and timing of any changes.

"I think that most colleagues and I have decided that we should simply be patient and what to see what happens," she said, and wait to "alter our economic forecasts and views on appropriate policies until we have a clearer understanding."