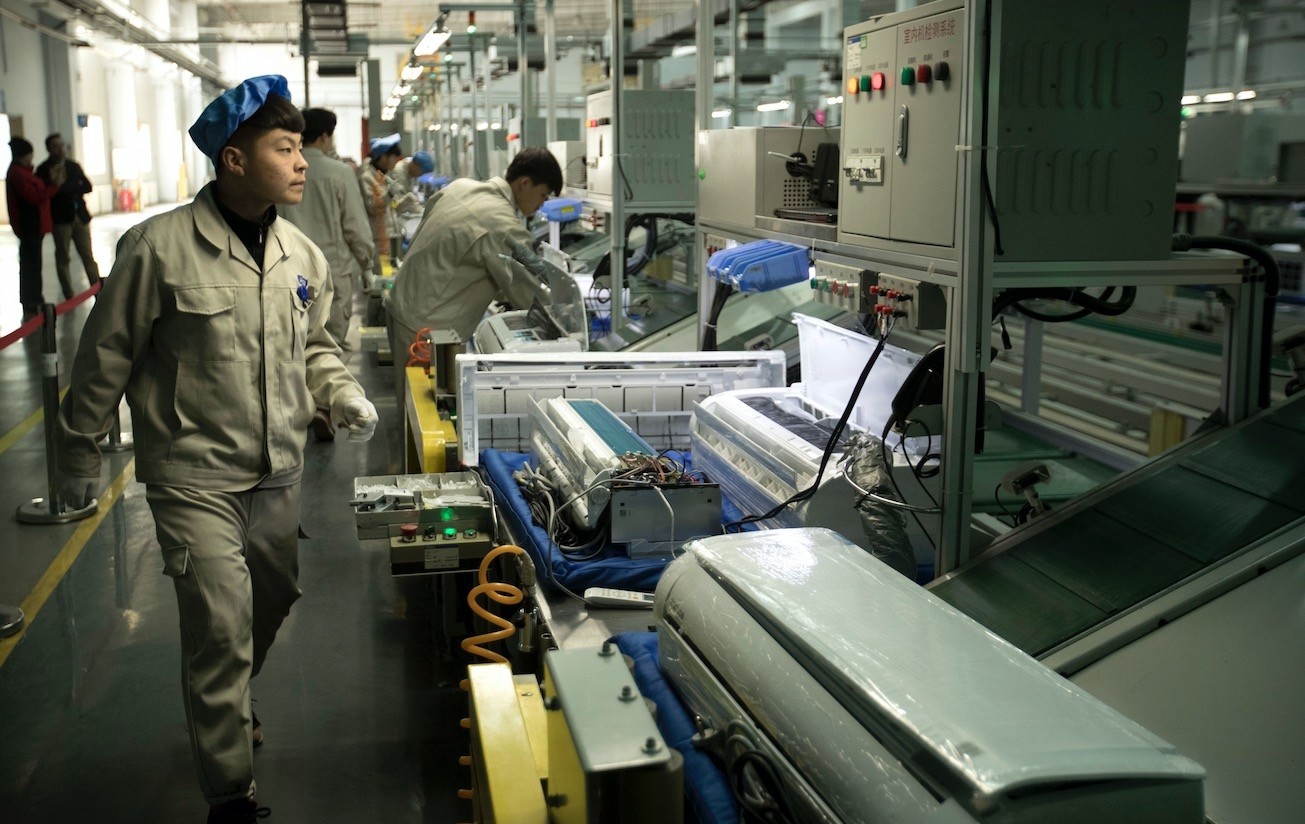 Factory workers check air conditioners on an assembly line at a Haier factory in Jiaozhou near Qingdao in the eastern Chinau2019s Shandong Province.
by Apr 04, 2017 12:00 am

Manufacture plants across the globe recorded robust growth in March, with China in the lead. Yet, the reflation trade is likely to face a new test this week when President Trump meets Chinese leader Xi-Jinping, which in the words of President Trump himself could be a little "difficult"

Factories across Europe and much of Asia posted another month of solid growth in March, rounding off a strong quarter for manufacturers, even though exporters fear a rise in U.S. protectionism could snuff out a global trade recovery.

China led the way, with an official manufacturing index expanding at the fastest pace in nearly five years. Surveys on Monday also showed encouraging growth in Europe, Japan, India and much of emerging Asia.

In the euro zone, IHS Markit's final manufacturing Purchasing Managers' Index rose to its highly in nearly six-year high of 56.2 in March, far above the 50 mark that separates growth from contraction.

Sterling's tumble following June's vote to leave the European Union helped manufacturers enjoy their fastest annual growth in three years during the final quarter of 2016 but the sector's PMI suggested growth slowed in the first three months of this year.

"Greater optimism about global growth prospects appears to be providing a boost, while the fall in the value of the pound post-Brexit is helping new orders," James Smith at ING said of the British PMI. "Whilst the near-term outlook for manufacturing looks encouraging, it's possible that Brexit uncertainty will start to weigh more heavily on sentiment over coming months."

The official Chinese PMI on Friday rose to 51.8 in March from 51.6, thanks to a months-long construction boom which is helping to boost resources prices around the world. That was the strongest reading since April 2012, though a private survey focusing on smaller companies suggested a more cautious outlook, raising questions about whether the export recovery can be sustained.

But the biggest risk for China may be brewing halfway across the world. U.S. President Donald Trump is due to hold his first meeting with his Chinese counterpart, Xi Jinping, in Florida later this week and those talks may be tense.

On Friday, Trump sought to push his crusade against U.S. trade deficits and for more manufacturing jobs back to the top of his agenda, by ordering a study into the causes of the trade deficits and a clampdown on import duty evasion.

The failure of the new U.S. administration to push through healthcare reforms last month has also added to global worries Trump will struggle to pass the tax cuts and spending plans he promised, which could boost demand in the world's largest economy.

Delays to the re-flationary plans could see U.S. orders and global investment slow in coming months as businesses grow more cautious. China has strong domestic demand to fall back on, at least for now, but other export-reliant Asian economies are more vulnerable if Trump goes on a trade offensive. Japanese factory activity expanded at a solid clip in March, though the pace slowed from the previous month as growth in new export orders and output slowed.

In South Korea, where exports account for half of the economy and domestic demand is similarly weak, readings have been decidedly mixed. On a more upbeat note, India's manufacturing activity grew at the fastest pace in five months as output and new orders accelerated.

"Asia's economic backdrop remains solid with most countries remaining above the key threshold level of expansion, though U.S. trade protectionism fears is the biggest uncertainty for now," said Aidan Yao, an economist at AXA Investment Managers.