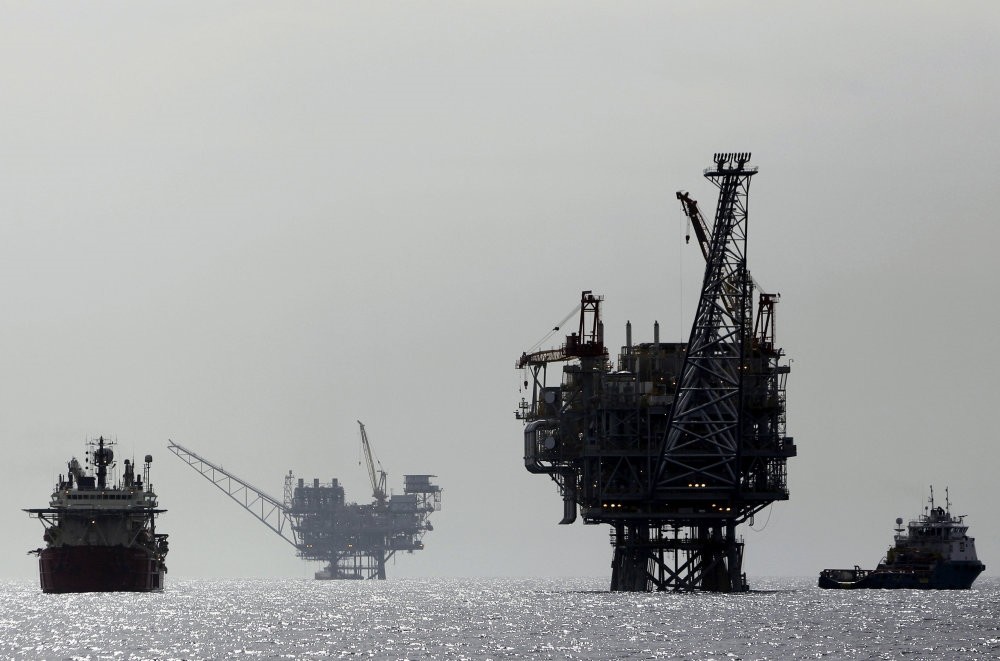 The deal Exxon Mobil and Qatar Petroleum signed with Greek Cyprus was construed as the unilateral utilization of the island's resources by Turkey, hence not acceptable. (Reuters Photo)
by Daily Sabah Apr 08, 2017 12:00 am

As the dispute over the exclusive economic zone and the share of resources continue in Cyprus, the Turkish Ministry of Foreign Affairs labeled the decision unacceptable as the deal Exxon Mobil and Qatar Petroleum signed with Cyprus to explore hydrocarbon in the island's south excludes the inalienable rights of Turkish Cypriots

"We find it as worrying as it is unacceptable that the Greek Cypriot side persists in acting as though it were the sole owner of the island and continues with its unilateral activities, particularly in a period when they should be displaying strong political will towards establishing a new partnership with the Turkish Cypriot people," the ministry said in a statement.

A delegation from Exxon Mobil and Qatar Petroleum signed an agreement Wednesday with the Greek Cypriot administration to explore hydrocarbon in Block 10, in southern Cyprus.

The statement said it agreed with the points made concerning the issue in a separate statement by the Turkish Republic of Northern Cyprus's (KKTC) Foreign Ministry.

"We share the justified concerns and outrage felt by the Turkish Cypriot side," the statement said.

"It will be recalled that in the past, we have also repeatedly drawn attention to the problematic nature of activities carried out by hydrocarbon companies in maritime areas over which the Turkish Cypriots have rights," it added.

"Furthermore, a significant segment of one of the relevant areas, namely block number 6, falls within Turkey's continental shelf. Foreign companies shall never, under any conditions, be permitted to carry out unauthorized hydrocarbon exploration and exploitation activities in our maritime jurisdiction areas," it concluded.

The statement also added that companies cooperating with the Greek-Cypriot administration on its unilateral hydrocarbon activities are disregarding the will of the Turkish-Cypriots. The ministry highlighted that the only way to utilize the island's natural resources prior to a comprehensive settlement, on the other hand, would be through arrangements for the joint exploitation of resources with the consent of the Turkish-Cypriot side and the fair sharing of potential revenues.

The agreement was signed while the U.N.-mediated discussions were interrupted between the KKTC and the Greek Cypriot administration. The U.N. announced Tuesday that Cyprus talks would resume April 11 after a two-month hiatus.

In 2010, the United States Geological Survey (USGS) estimated that there could be up to an additional 122 trillion cubic feet (3.45 trillion cubic meters) of undiscovered natural gas resources in the Levantine Basin, which encompasses a large portion of the eastern Mediterranean Sea. The USGS report also indicated that there could be up to 1.7 billion barrels of recoverable oil in the Levant Basin, hinting at future possible oil discoveries.

U.S. firm Noble Energy discovered the Aphrodite Field in Cypriot waters in late 2011. This field is located at the 12th exploratory drilling block in the maritime Exclusive Economic Zone and is estimated to hold about 200 billion cubic meters (bcm) of gas

Due to the dispute over Cyprus' maritime Exclusive Economic Zone, established with the 1982 United Nations Convention on the Law of Sea and covering 13 exploratory drilling blocks, the exploitation and export of the gas discovered in this area has not been allowed.

However, despite the disputed status, the Greek Cypriot administration continued to unilaterally open new tenders for hydrocarbon explorations without any collaboration with Turkish Cypriots.

The status of the Cyprus island remains unresolved in spite of a series of U.N.-mediated discussions between the Turkish Cypriot and the Greek Cypriot administrations.

The Cyprus island was divided into a Turkish Cypriot state in the north and a Greek Cypriot administration in the south after a 1974 military coup was followed by violence against the island's Turkish population, and the subsequent intervention of Turkey as a guarantor power.
RELATED TOPICS