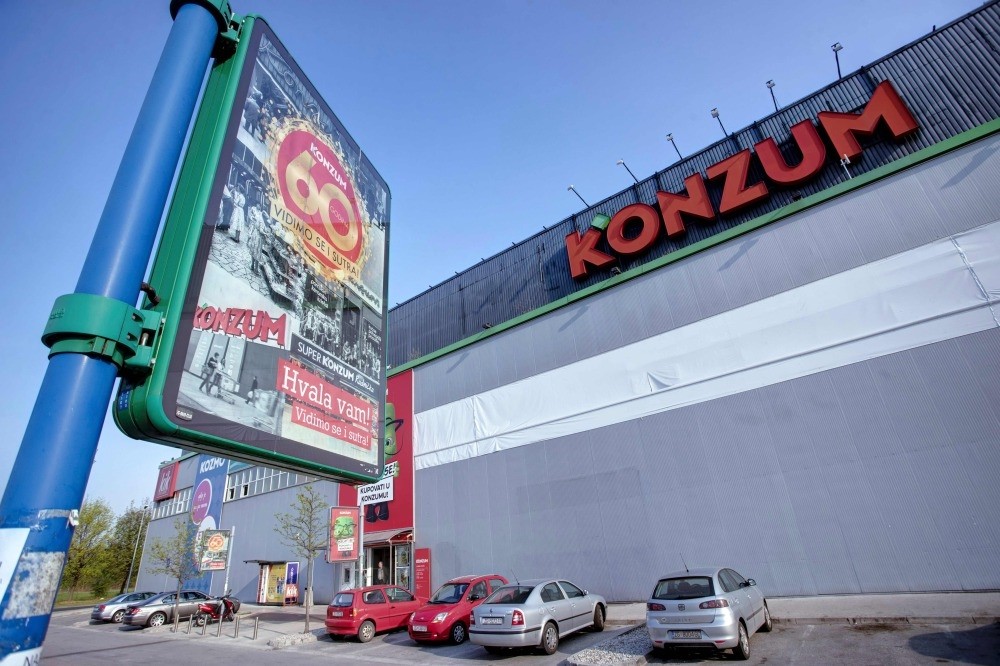 A bilboard celebrating the 60th anniversary of Konzum, a leading retail chain in Croatia, and part of Agrokor, is displayed next to the Konzum building in Zagreb, Croatia. (AFP Photo)
by Apr 08, 2017 12:00 am

From cashiers and farmers to drivers and travel agents, tens of thousands of people are worried about losing their jobs linked to the Balkans' biggest food producer and retailer as it struggles with crushing debt

That has rattled Agrokor's 60,000 employees in the region, two-thirds of whom are in Croatia, making it the country's largest employer. Agrokor's debt was estimated to be 6 billion euros ($6.3 billion) in September - an alarming amount for a company whose revenue of 6.7 billion euros accounts for 15 percent of Croatia's gross domestic product (GDP). The group's leading business is the supermarket chain Konzum, but it has acquired a wide range of companies in the agriculture, food production, tourism and distribution sectors. Also anxiously watching the developments are Agrokor's small suppliers, who after months of waiting for payments now wonder if they will be paid at all -making them question future transactions.

"It is hard to continue production without money, but it is also difficult to enter a new market," said Zvonimir Belic, a leading regional tomato producer who currently sells around a third of his goods to Agrokor.

"It's not only about saving Agrokor, but about saving Croatian firms. We are running out of time ... Decisions need to be made," Belic said.

The impact reaches beyond the Balkan country of 4.2 million people. Agrokor has businesses in neighboring Bosnia, Serbia and Slovenia, while its network of suppliers means tens of thousands more will be affected in a region where unemployment already runs high.

"I am afraid that Agrokor will be a very difficult issue in Serbia too," Serbian Prime Minister Aleksandar Vucic said this week in Bosnia, where he discussed the crisis with his Croatian counterpart Andrej Plenkovic.

Analysts say Agrokor's accumulated debt, aggressive expansion and expensive borrowing through its main creditors Russian state-owned banks Sberbank and VTB created a snowball effect that eventually turned into an avalanche. In January, Agrokor withdrew from a loan deal with international creditors, triggering a surge in its bond yields. Some companies within the group had their accounts frozen due to unpaid state taxes and obligations to suppliers.

"The financing was short-term, under unfavorable conditions ... While expansion was too fast with very fragile financing sources," economic analyst Luka Brkic told AFP.

Owned by Croatian businessman Ivica Todoric, Agrokor is almost as important as tourism in Croatia, which emerged from a six-year recession in 2015 and is one of the European Union's poorest-performing economies.

"A collapse of Agrokor would lead Croatia into a recession, pushing it back to 2008," warned Vladimir Nisevic, editor-in-chief of the Poslovni dnevnik business newspaper.

Croatia's Chamber of Agriculture has urged the government to make suppliers' payments a priority issue, warning of the threat of farm closures and a "further exodus from rural areas."

Faced with a company that may be too big to fail, Croatia's Parliament adopted an emergency law on Thursday aimed at saving troubled giant firms like Agrokor and shielding the country's economy through a restructuring process.

Opposition lawmakers argued, however, that the law would not protect employees and small suppliers but rather just the management. Separately, Agrokor and its board of creditors signed a "standstill agreement" freezing its repayment of its debts to the banks, while naming an independent expert as a chief restructuring officer.

"There is no guarantee that we will succeed," restructuring expert Antonio Alvarez told reporters on Monday, describing the situation as "pretty acute."
RELATED TOPICS