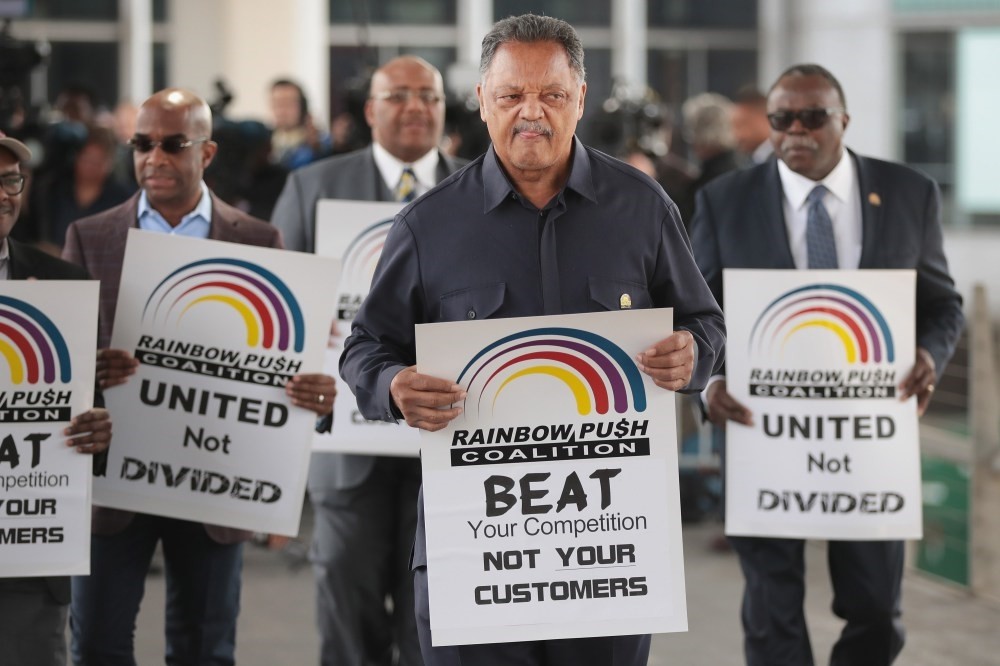 Civil rights leader Reverend Jesse Jackson leads a small group from the Rainbow PUSH Coalition in a protest outside the United Airlines terminal at O'Hare International Airport in Chicago.
by Associated Press Apr 14, 2017 12:00 am

Look out, Corporate America. Customers armed with smartphones and video cameras are watching when you screw up. The viral video of a ticketed passenger dragged forcefully off a United flight is only the latest example of bad behavior exposed in the age of social media.

In February, Uber came under fire after a driver posted video of CEO Travis Kalanick berating him. Earlier, a Comcast technician was shown in a video sleeping on a customer's couch, and an audio recording chronicled one man's herculean efforts to drop Comcast service; they are among the embarrassing customer complaints that ultimately forced improvements . FedEx had to respond after video showed a driver carelessly throwing a package with a computer monitor over the front gate. Beyond the corporate sphere, smartphone videos of police brutality have prompted protests and investigations.

Not long ago, such incidents might have gotten a mention on the local news at most, and quickly disappeared. But smartphone cameras and social media have democratized information and shifted power to consumers. Companies can no longer sweep complaints under the rug.

"That's something a lot of companies just don't get," said Paul Argenti, a professor of corporate communications at Dartmouth's Tuck School of Business. "Companies still operate as if they can hide things and make believe something didn't happen."

Companies can't eliminate embarrassing gaffes entirely, but can learn from past blunders to minimize the damage. It starts with training. Employees need to be ready to react when a situation gets dramatic - and companies should emphasize that anything employees do could be recorded.

On-site employees need to be given more power to respond to avoid escalating an incident, especially one that might be recorded. In United's case, for instance, even if employees were following the rules for seeking volunteers to give up seats, they should have been able to read the situation and increase the financial incentives for volunteers rather than drag a passenger off a flight.

"You need rules, but you need to be flexible and adapt," Argenti said.

Once a video is out there, the standard PR-crisis response remains the same as it always has: Work swiftly to correct the situation in the eyes of the public.

"Apologize, talk about why it happened, and say it will never happen again," Argenti said.

United CEO Oscar Munoz eventually apologized, but not for two days and after first blaming the customer and airport security. And once a video goes viral, companies have to cede control of the narrative. "When the video is out there, don't try to countermand what the video says," said Herman Leonard, a professor of business administration at Harvard.

In the past, companies had hours or days to respond to a crisis. Now, companies must respond immediately, before a scandal spins out of control on social media.
RELATED TOPICS