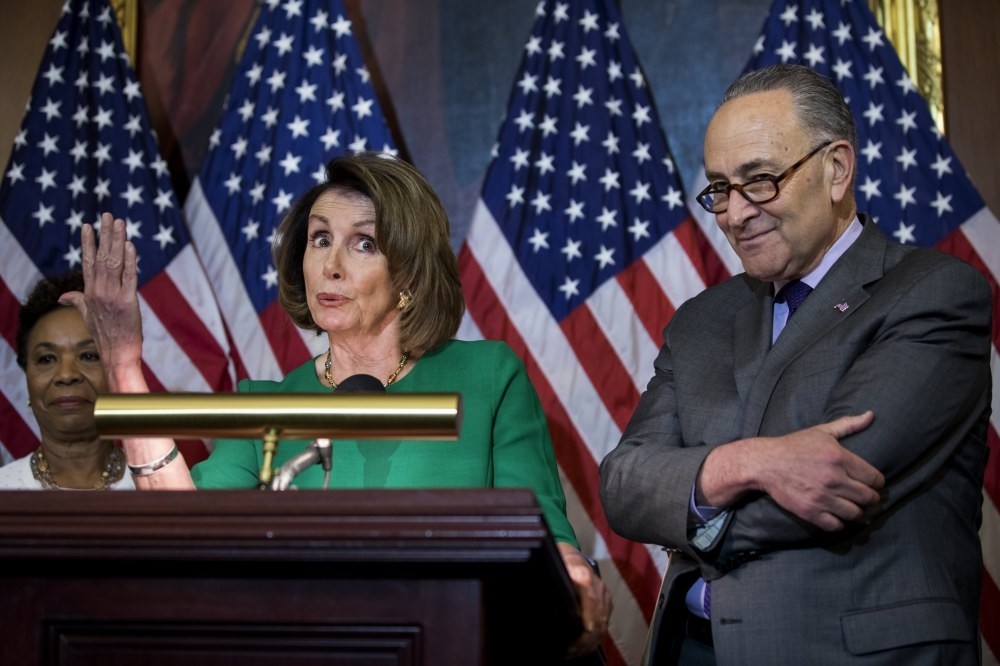 The agreement on a spending bill will keep the U.S. government running until Sept. 30. The bipartisan deal boosts military spending but does not include funding for Trump's proposed wall on the Mexico border

Congressional Republicans and Democrats have reached agreement on a huge $1 trillion-plus spending bill that would fund most government operations through September but denies President Donald Trump money for a border wall and rejects his proposed cuts to popular domestic programs. Aides to lawmakers involved in the talks disclosed the agreement Sunday night after weeks of negotiations. The bill was made public in the pre-dawn hours Monday.

The catchall spending bill would be the first major piece of bipartisan legislation to advance during Trump's short tenure in the White House. While losing on the wall along the U.S.-Mexico border, Trump won a $15 billion down payment on his request to strengthen the military. The measure funds the remainder of the 2017 budget year, through Sept. 30, rejecting cuts to popular domestic programs targeted by Trump such as medical research and infrastructure grants.

Successful votes later this week would also clear away any remaining threat of a government shutdown - at least until the Oct. 1 start of the 2018 budget year. Trump has submitted a partial 2018 budget promising a 10 percent increase for the Pentagon, financed by cuts to foreign aid and other nondefense programs that negotiators on the pending measure protected. Democrats were quick off the mark to praise the deal.

"This agreement is a good agreement for the American people, and takes the threat of a government shutdown off the table," said Senate Minority Leader Chuck Schumer, D-N.Y., a key force in the talks. "The bill ensures taxpayer dollars aren't used to fund an ineffective border wall, excludes poison pill riders, and increases investments in programs that the middle class relies on, like medical research, education and infrastructure."

Trump said at nearly every campaign stop last year that Mexico would pay for the 2,000-mile (3218.54-kilometer) border wall, a claim Mexican leaders have repeatedly rejected. The administration sought some $1.4 billion in U.S. taxpayer dollars for the wall and related costs in the spending bill, but Trump later relented and said the issue could wait until September.

Trump, however, obtained $1.5 billion for border security measures such as more than 5,000 additional detention beds, an upgrade in border infrastructure and technologies such as surveillance.

The measure is assured of winning bipartisan support in votes this week; the House and Senate have until midnight Friday to pass the measure to avert a government shutdown. It's unclear how much support the measure will receive from GOP conservatives and how warmly it will be received by the White House.

Republicans are also eager to move on to other issues such as overhauling the tax code and reviving their moribund effort to repeal the Affordable Care Act, President Barack Obama's health care law.

Among the final issues resolved was a Democratic request to help the cash-strapped government of Puerto Rico with its Medicaid burden, a top priority of House Minority Leader Nancy Pelosi of California. Pelosi and other Democrats came up short of the $500 million or so they had sought but won $295 million for the island, more than Republicans had initially offered. Democrats were successful in repelling many conservative policy "riders" that sought to overturn dozens of Obama-issued regulations. Such moves carry less urgency for Republicans now that Trump controls the regulatory apparatus. House Republicans succeeded in funding another round of private school vouchers for students in Washington, D.C.'s troubled school system.