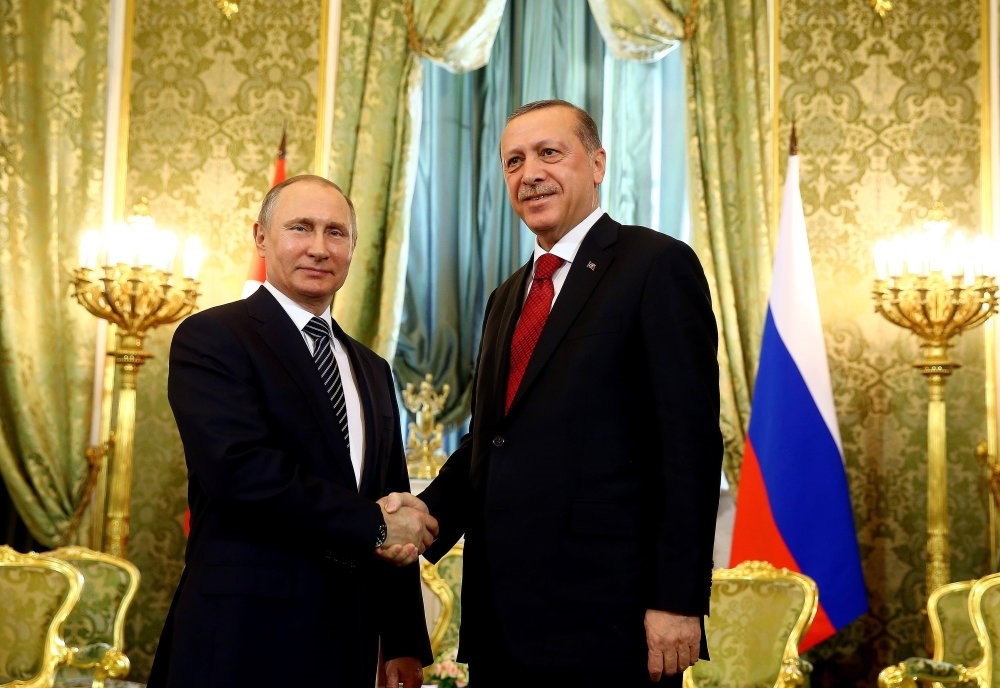 The last meeting between Erdou011fan and Putin was held on March 10, when the two leaders agreed to boost economic cooperation between Turkey and Russia.
by Daily Sabah May 03, 2017 12:00 am

The fifth meeting between President Erdoğan and Vladimir Putin is scheduled to take place today in Sochi. The amelioration of economic relations, including visa requirements and trade restrictions, is listed among the meeting's agenda items

The second stop in a busy May schedule for President Recep Tayyip Erdoğan will be Sochi, Russia today where he will meet with President Vladimir Putin to discuss the Syrian crisis, which is expected to dominate the agenda as well as a number of economic issues including visa requirements, the lifting of bans on certain agricultural products and the removal of restrictions for Turkish businesses. Another critically important meeting between President Erdoğan and President Putin will be held in Sochi tomorrow. Sochi is a change of scenery for the two's meeting, with the locations of their previous meetings being St. Petersburg, China, Istanbul and Moscow, after the jet downing crisis in 2015.

Some important steps have been taken especially in agriculture and tourism in order to cease the problems while the prime ministerial and ministerial level talks have been held between two important actors of the region, especially on the issue of Syria crisis.

Even though the desire to return to the levels prior to the jet downing crisis in bilateral trade is an issue that is often expressed by the two leaders, it is not possible to say that this desire, expressed in the highest levels of the state, has fully descended to the lower levels.

Work permits, visas, and bans on business activities that are regarded as the biggest problems of Turkish citizens living and doing business in Russia continue despite Putin's statement on lifting the bans imposed on Turkish citizens at the 6th Turkish-Russian High Level Cooperation Council Summit held on March 10, sanctions on Turkish agricultural products have not been fully lifted yet.Deputy Minister of Foreign Affairs Alexey Meshkov announced last week that the Russian Foreign Ministry is ready to go for facilitation of visa regime for Turkish citizens in certain categories.

'Russia harms its own companies'

Naki Karaaslan, Head of Russian-Turkish Business Association (RTİB), told Anadolu Agency (AA) in a statement regarding the summit to be held tomorrow that the project applied to the Turkish citizens, the sectoral activity applied to Turkish companies and the lifting of the import ban on agricultural products are very important. Expressing their desire for the elimination of the problems with regards to working visas, technical visas and the applied worker quota, Karaaslan said, "Companies with Turkish capital, employing 100,000 people in Russia, are actually Russian companies. Russia is harming itself with these bans."

Stressing that people in Russia, where economic stagnation still continues due to the ban imposed on Turkish agricultural products, have to spend 30 to 40 per cent more on these products, Karaaslan said, "These things should no longer be resolved with mutual resentments, but with reason and advice."

'Economic relations between will be strengthened again'

Nigyar Masumova, an academic from the World Economy Department of the Moscow State International Relations University of the Russian Foreign Ministry, pointed out that concrete steps have not yet taken despite the promises given to Turkish citizens regarding visa application following President Erdoğan's recent visit to Moscow.

Masumova, foreseeing that a statement is likely to be made in this regard after the Sochi summit, noted that many Russian citizens will visit Turkey this summer and that the economic relations between the two countries will be strengthened again thanks to this positive development.

Referring to the problems experienced in agricultural products, Masumova said, "I think that it is possible to reach a solution by removing sanctions against Turkish tomato and cucumber products. These bans are aimed at very sensitive sectors of agriculture, and are very important in terms of the social structure of the two countries."

Signs of recovery in bilateral trade

Meanwhile, the economic relations of the two countries are recovering thanks to the normalization process despite the ongoing bans.According to TURKSTAT, Turkey's exports to Russia rose by 40.9 percent to $498.1 million in the first quarter of this year compared to the same period of 2016. While imports from Russia increased by 11.5 percent to $4.4 billion in the said period, the most important cause of this increase was natural gas imports, which amounted to 2.5 billion cubic meters in February due to cold winter conditions.

As an important customer of Russia in agriculture products, Turkey imported 4.7 million tons of cereal products from Russia last year.

The import ban on chicken meat, turkey meat, tomatoes, cucumbers, pickles, grapes, apples, pears and strawberries from Turkey is still ongoing on the Russian side. The latest development in this regard is the claim that Turkey has levied a 130 percent tax hike for the imports of wheat and corn, 45 percent for rice, 36 percent for sunflower oil, 13.5 percent for sunflower seeds and 9.7 percent for pulses from Russia.

Russian Agriculture Minister Alexander Tkachev also said that they are close to an agreement with Turkey on agricultural products that will please both sides, adding that the talks with the Turkish authorities continue and that they hope the "reason" will win eventually.