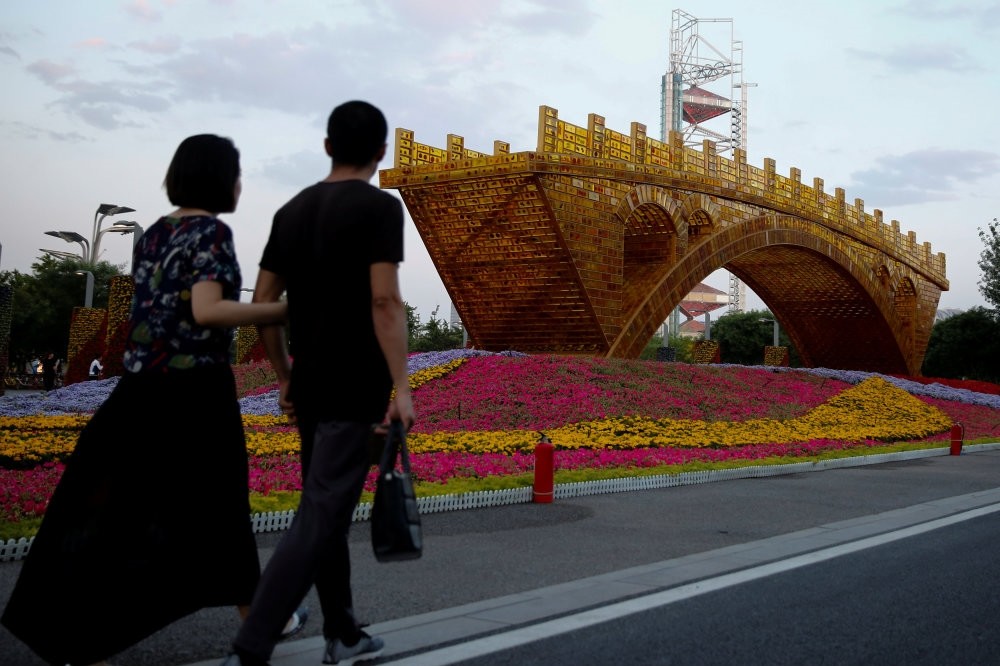 World leaders are gathering in Beijing to attend the Belt and Road Forum as part of the One Belt, One Road project, aiming to reconfigure one of the world's ancient trade routes. During the summit, Turkey and China are expected to strengthen their partnership through economic and trade agreements

President Recep Tayyip Erdoğan departed on Friday for the Chinese capital of Beijing in order to attend the Belt and Road for the International Cooperation Forum hosted by Chinese President Xi Jinping. The forum where the leaders of 28 countries will participate is scheduled to be held on May 14-15.

Ahead of his departure, President Erdoğan held a press conference at Ankara Esenboğa Airport and elaborated on his visit to China as well as his visit to the U.S., scheduled on May 16. Erdoğan announced that that he will hold bilateral meetings with both Chinese President Xi and other leaders attending the summit.Pointing out that high-level attendance is expected for the summit in Beijing, President Erdoğan said that they will get the chance to meet the heads of states and exchange ideas on bilateral, regional and global issues.

"A very important step is likely to be taken during this visit for the infrastructure and superstructure in Chinese-Turkish relations, whose preliminary preparations were previously made. If this step is hopefully taken, it will effect not only between Turkey and China, but also the world," Erdoğan said, adding that they will hold bilateral talks to evaluate the steps that can be taken in bilateral relations between Turkey and China.

Stressing that the OBOR project, launched in 2013 at the initiative of the Chinese President Xi and called the Modern Silk Road, is of great importance, Erdoğan said that the purpose of this historic project is to develop a comprehensive infrastructure, transportation, investment, energy and trade network linking Asia, Europe, the Middle East and Africa.

Erdoğan said that the total length of the modern Silk Road is 109,000 kilometers and that the area covers more than 50 countries in eastern, central and western Asia and central, southern and western Europe in over 40 million square kilometers, which corresponds to 4 billion people and 26 percent of the world's surface area.

As well as striving to actualize the "One Belt, One Road" project stage by stage and aiming to operationalize the "Northern Corridor" over Russia and to the "Southern Line" over Iran, China is carrying out projects for the "Middle Corridor" that will connect Turkey and Europe to the Central Asian Republics, Afghanistan, Pakistan and China.

The OBOR project aims to connect Asia, Europe, Middle East and Africa in terms of logistics and transportation via ports, railways, airports, electrical network and even fiber optic networks. According to Oxford Economics data, the project includes 65 countries, which account for one third of global GDP and 4.5 billion of the world's population. Within the scope of the project, it is stated that up to $304 billion has been spent.

Erdoğan will address world leaders at the high-level meeting of the Belt and Road Forum for International Cooperation on May 14 and deliver a speech at the Leaders' Round Table on May 15 organized as part of the forum, according to a press release published by the Presidency.

The forum will host the U.N. secretary general, the chairpeople of the World Bank and the International Monetary Fund (IMF)as well as the presidents and prime ministers of 28 countries and more than 250 ministers.

It was also reported that Turkey and China are expected to strike a number of trade agreements. An important deal for the Edirne-Kars High Speed Train project, which will connect London and Beijing and which is estimated to worth $30 billion is also listed among those agreements.

Suggesting that a project in this dimension makes collaboration necessary rather than competition, Erdoğan said that Turkey provides very strong support to the modern silk initiative, noting that the Marmaray, the Yavuz Sultan Selim Bridge, the Eurasia Tunnel, the Third Airport and the 1915 Çanakkale Bridge are the complementary rings of this project in the first stage.

"We also aim to realize the Trans-Caspian-Middle Corridor Project, which opens an additional link corridor between China and Europe. We will have completed an important step in the middle corridor with the operation of the Baku-Tbilisi-Kars Railway Project in mid-2017. This visit will highlight our country's strategic location in One Belt, One Road initiative," Erdoğan said,

The president underscored that Turkey's role as a geographical and cultural bridge between Asia and Europe throughout history will be of considerable importance and it will once again be registered that Turkey is a real junction point.

"Turkey is an indispensable partner for countries that attach importance to transportation and liaison networks in geostrategic terms as One Belt, One Road project. Of course, I will also underline these points during the talks I will hold with my counterparts," Erdoğan concluded.

Turkey has accomplished many great infrastructural and transportation projects in recent years, which are characterized as the continuation of the ancient Silk Road that controlled trade between Asia and Europe for centuries.