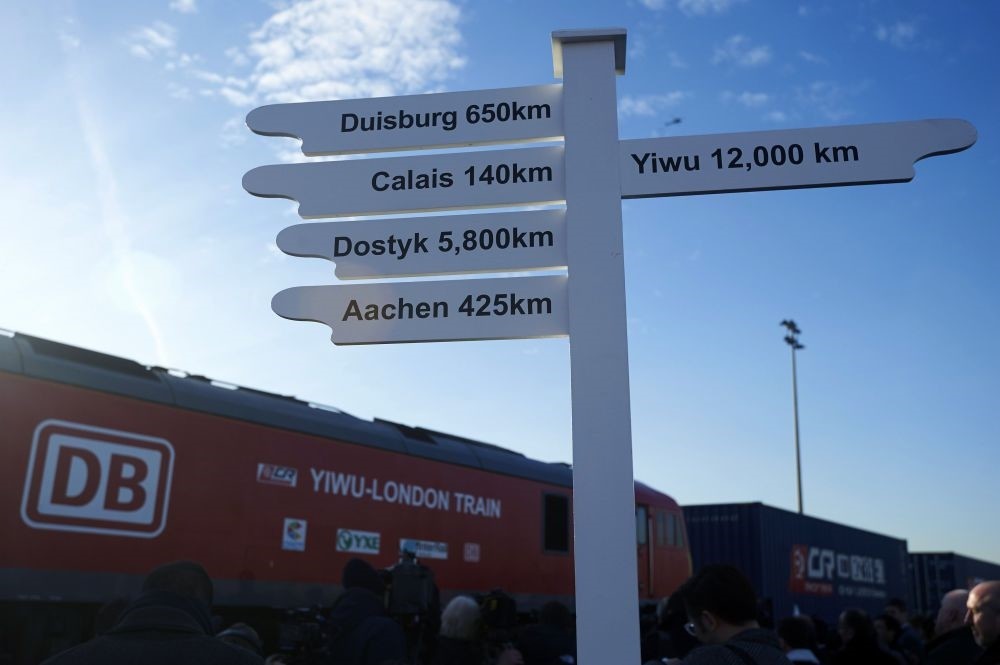 A sign showing the distance in kilometers to various destinations as a freight train transporting containers laden with goods from China, arrives at DB Cargo's London Eurohub rail freight depot in east London.
by May 16, 2017 12:00 am

As world leaders gathered in the Chinese capital to attend the Belt and Road forum, the EU leaders have emphatically expressed the need for more economic collaboration that will pave the way for more lucrative investment projects

The need for an EU-China investment agreement is urgent and would be the easiest way for Chinese President Xi Jinping to meet pledges of making China's economy open to the world, European Commission Vice President Jyrki Katainen said yesterday.

Xi promised $124 billion on Sunday for his new Silk Road plan, which aims to bolster China's global leadership ambitions by expanding infrastructure between Asia, Africa, Europe and beyond.

China has used the initiative to help portray its economy as open to the world, distinct from a rising wave of global protectionism, as U.S. President Donald Trump promotes an "America First" policy.

"President Xi has repeated this message several times now, and it is a good sign, and we want to help him deliver. The easiest way to deliver what he has said is to speed up EU-China investment agreement negotiations," Katainen, the head of the European Union's delegation to the meeting, told Reuters.

Such an investment deal is "urgently needed" to boost business links between the two sides, Katainen said in an interview on the sidelines of the summit.

China and the EU are set to hold their own summit in Brussels in early June, during which the Comprehensive Agreement on Investment (CAI) currently under negotiation will be a central focus.

Katainen said more Europeans were demanding that China give EU businesses access to its market in the way that EU markets were open to Chinese investment.

"People in Europe are just asking for reciprocity. Nothing more," Katainen said.

"Something must change now. Also, taking into account what President Xi has said, it would be not that encouraging if the (EU-China) summit would not deliver even though the political will has been expressed so directly several times," he said.

Katainen said Europe wanted to see "concrete, measurable outcomes" from investment talks, adding that he could imagine "results" within a year if Beijing could show strong enough political will to make market access offers.