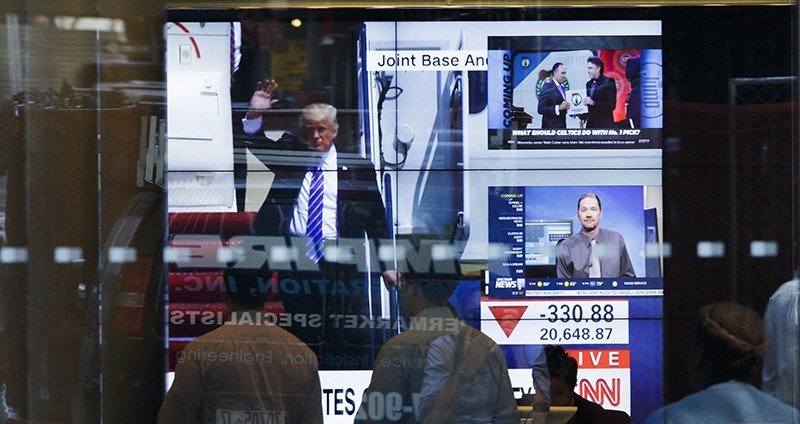 President Donald Trump is show on a live television broadcast arriving back to Washington DC as a graphic shows the Dow Jones industrial average down 330 points (EPA Photo)
by Compiled from Wire Services May 17, 2017 12:00 am

The steep drop, which sent the Dow Jones industrial average down more than 300 points, ended an unusually long period of calm in the markets. Financial stocks, which had soared in the months since the election, slumped the most as bond yields declined and traders piled into utilities, gold and other traditional safe-haven assets.

Banks, which soared in the months since the election, slumped. Bank of America lost 5.9 percent.

Small-company stocks, which would stand to benefit greatly from Trumps' proposed tax cuts, fell more than the rest of the market.

The news comes on the heels of a tumultuous week at the White House when Trump unexpectedly fired Comey and reportedly disclosed classified information to Russia's foreign minister about a planned Islamic State operation.

Optimism over pro-growth policies under Trump had driven a sharp rally in U.S. stocks after the Nov. 8 U.S. election. "We're getting into stall mode because of the early expectations for the Trump presidency. It's all being put well on the back burner and even off the stove. It's kind of worrisome as it could take time to muddle through this," said Joseph Benanti, managing director, senior sales trader at Rosenblatt Securities in New York.