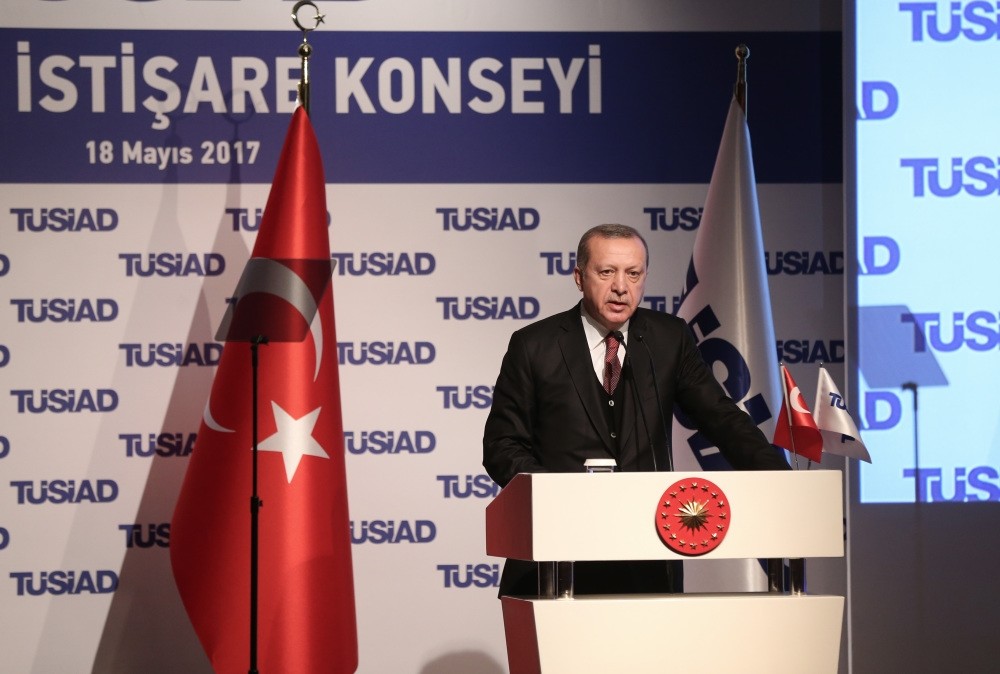 President Erdou011fan delivered a speech at the High Consultation Meeting of the Turkish Industrialists and Businessmen Association at the Sabancu0131 Center.
by Daily Sabah May 19, 2017 12:00 am

The echoes of President Erdoğan's visit to China still reverberates in Turkish economic circles, as the president emphatically explained the trillion-dollar potential of the modern Silk Road for Turkish businesspeople

In an address he delivered to prominent Turkish businesspeople at the Turkish Industrialists and Businessmen Association's (TÜSİAD) High Consultation Meeting, President Recep Tayyip Erdoğan referred to his series of visits abroad in May. Particular reference was made to his visit to Chinese capital Beijing, where he attended the Road and Belt Forum with the leaders of 28 countries and discussed the investment opportunities the modern Silk Road presents as he highlighted that the Belt and Road project's potential is worth trillions of dollars.

May has been and continues to be a busy month for President Erdoğan as he has already visited four countries to boost Turkey's political and economic ties with the countries that have managed to integrate themselves to a developed and yet a burgeoning global order. Addressing the businesspeople at TÜSİAD's High Consultation Meeting, the president explained the reasons for behind those visits and opportunities they present.

Kicking off his overseas tour with Russia on May 3, Erdoğan then visited India, China and the U.S. In relation to his China visit, where he participated in the Belt and Road Forum for International Cooperation, organized under the auspices of Chinese President Xi Jinping, he emphasized the ample opportunities the Belt and Road initiative offers for world markets.The 'One Belt one Road' project aims to connect Asia, Europe, Middle East and Africa in logistics and transportation via ports, railways, airports, electrical network and even fiber optic networks and to reconfigure the ancient trade route, Silk Road. According to Oxford Economics data, the project includes 65 countries, which account for one-third of the global GDP and 4.5 billion of the world's population. Within the scope of the project, it is stated that up to $304 billion has been spent.

Stating that Turkey is located in the West end of the project, its position is named "the middle corridor," which covers important transportation routes, President Erdoğan said Turkey is a powerful country located on the corridor and it should capitalize on this power. Stressing the vast potential of Asian countries and the necessity to consider the population of those countries, Erdoğan said the Belt and Road Forum presents trillions of dollars worth opportunities for the countries involved. He emphasized however that the path to reveal the trillion-dollar potential is long and trying.

Additionally, Erdoğan further elaborated on the fact that the world order is currently being reconfigured and that Turkey occupies the center of this process of transforming the established world order. His emphasis gave a hint to the Turkish businesspeople, which can be construed as warning or a remark to stir them to take action and seize the potential.

Transportation on the Silk Road with the 'Caravan' project

Previously, Ahmet Arslan, the Ministedr of Transport, Martime and Communicatio9ns announced that that Turkey and China signed Land Transport Agreement signed with China at the Belt and Road Forum.

"If my Chinese counterpart agrees, I think it would be beneficial to launch the Caravan project between China and Turkey, and to carry freight transport to Turkey and Europe via a convoy of 10 vehicles in the middle corridor of the Silk Road," Arslan said, indicating that they can identify possible problems, obstacles and difficulties on the route with a trial run which will also have a significant contribution on the revitalization of the road.

Recalling that an investment of $100 billion has been made in the country's transportation infrastructure in the last 14 years, Arslan pointed out that the government has built new highways, railways, airports and ports.

Highlighting that they completed the missing road connections along the east-west and north-south corridors with highway, tunnel and bridge projects, Arslan also informed that they have collaborated with countries in the region on the development of transit transportation and the elimination of non-physical obstacles.