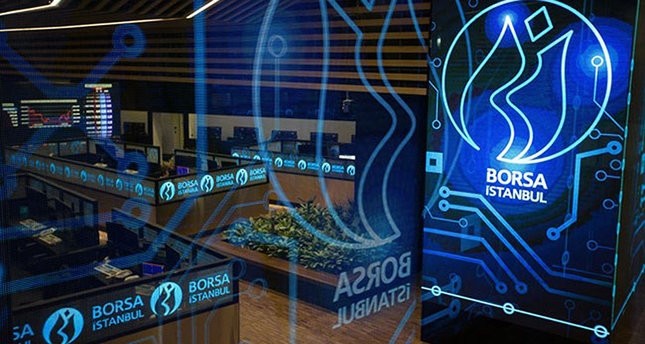 Having broken successive records in May, the BIST 100 index broke a new record, exceeding 97,000 Tuesday after reaching its highest closing rate of all time on Monday

The Borsa Istanbul stock exchange BIST 100 index, which has maintained its upward trend for the last five months, hit a new record Tuesday.

The BIST 100 index, which closed at 96,400.03 points Monday with a new record, rose to 96,845 points Tuesday, reaching the highest level of all time. The index entered the interval for continuous auction transactions at 96,808 with an increase of 408 points (0.42 percent). Maintaining its positive course in the second half of the day, BIST 100 carried the historical peak to 97,179 points. The index maintained its trend, nearing close to peak levels as of 2:19 p.m.

According to experts, the rise in the stock market will continue and, if the first target of 98,000 is exceeded, the psychological resistance of 100,000 will be the target.

A1 Capital Menkul Kıymetler Research Director Belgin Maviş said that the index has technically been moving in this direction since 2007, and even though it may be retreating from time to time, it has not exceeded 96,500, which is currently in the resistance position of this channel, despite the decline in exchange rates.

Pointing out that there were reasons to slow the rise of markets both domestically and abroad, Maviş said uncertainties regarding the administration and policies of U.S. President Donald Trump, coupled with geopolitical risks, the interest rate hike of the Fed and political uncertainties in Europe, have come to the forefront abroad, along with possible Cabinet changes and issues causing instability in the economic administration within the country.

Maviş said the main concern for markets was the possibility of Trump being removed from office, adding that the U.S. president's fear of losing his seat after firing FBI Director James Comey had increased, which also has a negative effect on the market.

Maviş noted that the possible Cabinet revision has become the focal point of the markets after the Justice and Development Party (AK Party) congress came to the domestic agenda, adding that markets would enjoy a strong Cabinet and strong economy administration and that with this, the BIST 100 index could permanently exceed 96,500.

Maviş said that deleting zeros from the index would be beneficial if the index were settled above 100,000 not at the first stage, adding that it would be both a simplification in technical terms and an ease to investors' mood.

Noting that the Organization of Petroleum Exporting Countries (OPEC) meeting and NATO summit to be held in the upcoming days and attended by President Recep Tayyip Erdoğan will be the agenda items to be followed in the short-term, she said if the summit posts highlights on the European Union, lira assets will be affected positively and the sales pressure on the index will decrease.

Suggesting that the continuation of the positive wind for the developing countries is also good for the index, Turşucu said, "It was positive for the index that the government had to dismiss early election expectations after the referendum and adopt a reformist discourse. It was important for the markets. We think that the index has a place to go due to these reasons."

Turşucu said the 98,000 level, which corresponds to 2.73 cents in dollar terms, may be the first target, indicating that 100,000 psychological resistance can be tested if this level is exceeded. "There is still a tendency to recover from fallen points in the dollar-based index. The place to go above is quite high. But the current wind must continue for higher levels. Global winds seem to be more effective than domestic ones in the coming period," Turşucu continued. "Whether or not Trump-related concerns in the U.S. market will another rise will be important. Any sales wave on the New York stock exchange (NYSE) will be a huge risk for global markets. I do not think the Fed poses a risk factor to the markets anymore."

Turşucu stressed that the attitudes of OPEC and non-OPEC countries regarding oil would also be important, adding that the sharp decline in oil prices could negatively affect the markets.