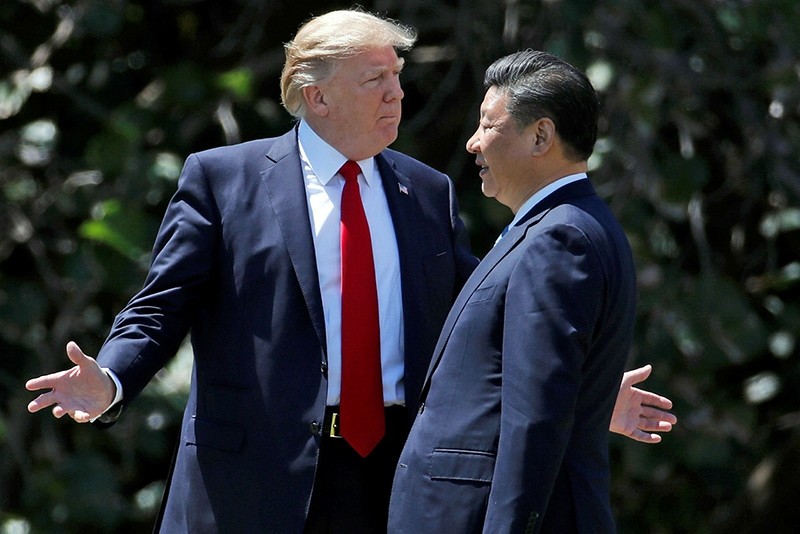 In this Friday, April 7, 2017, file photo, U.S. President Donald Trump, left, gestures as he and Chinese President Xi Jinping walk together at Mar-a-Lago in Palm Beach, Florida. (AP Photo)
by Compiled from Wire Services Aug 02, 2017 12:00 am

U.S. President Donald Trump is close to a decision on how to respond to what he considers China's unfair trade practices, a senior Trump administration official said on Tuesday.

Trump is considering encouraging U.S. Trade Representative Robert Lighthizer to initiate an investigation of Chinese trade practices under the 1974 Trade Act's section 301, the official said. An announcement could come as early as this week, the official said, speaking on condition of anonymity.

Section 301 of the Trade Act of 1974 allows the president to unilaterally impose tariffs or other trade restrictions to protect U.S. industries from "unfair trade practices" of foreign countries, such as trade agreement violations, or "discriminatory" actions that burden U.S. commerce.

The United States has a long list of grievances about China on trade, including accusations of steel dumping and theft of U.S. intellectual property.

China has said that trade between China and the United States benefits both sides and that Beijing is willing to work with Washington to improve their trade relationship.

Trump has long been a critic of Chinese trade practices but his interest in penalizing Beijing has risen because of his concern at what he perceives to be Chinese inaction on reining in increasingly belligerent North Korea.

The United States has pressed China to exert more economic and diplomatic pressure on North Korea to help rein in its nuclear and missile programs. Beijing has repeatedly said its influence on North Korea is limited and that it is doing all it can.

A senior Chinese official said on Monday there was no link between North Korea's nuclear program and China-U.S. trade.

Section 301 was used extensively in the 1980s to combat Japanese imports of motorcycles, steel and other products - an era during which Lighthizer served as deputy U.S. trade representative.

The statute has been little used since the World Trade Organization was launched in 1995.

The WTO provides a forum for resolving trade disputes, but Lighthizer and Commerce Secretary Wilbur Ross have complained that it is extremely slow, often taking years to reach a conclusion, and that the Geneva-based organization has an inherent anti-U.S. bias.

Both China's Foreign Ministry and Commerce Ministry did not respond immediately to requests for comment.

Chinese Premier Li Keqiang met Michigan's governor Rick Snyder in Beijing on Tuesday, where he said the common interests of China and the United States were bigger than any disputes.

"China welcomes U.S. states, including Michigan, to ... enhance bilateral trade and investment, ... and consolidate and expand cooperative consensus to create better development opportunities and jobs for both countries' peoples," Li told Snyder, according to a Chinese government statement.

U.S. Commerce Secretary Wilbur Ross, in a commentary in Tuesday's Wall Street Journal, outlined a slew of grievances against both China and the European Union that he said contributed to the global U.S. trade deficit in goods of $725.5 billion in 2016, $347 billion of which was with China.

He tried to refute arguments that the Trump administration was taking a protectionist stance, saying that both China and Europe were more protectionist because they subsidized export industries and had "formidable tariff and non-tariff trade barriers against imports."

"We will use every available tool to counter the protectionism of those who pledge allegiance to free trade while violating its core principles," Ross added.

According to Ross, possible U.S. actions with trade remedies is not protectionism, because China is not a market economy as the country's government "creates national champions and takes other actions that significantly distort markets."

Trump and his Chinese counterpart Xi Jinping seemed to get off to a good start when they met in Florida in April and agreed on a 100 day action plan.

This led to exports of U.S. beef to China for the first time since 2003.

But in mid-July a day of trade talks led to nothing.

Trump on Saturday expressed frustration with China's behavior in the North Korea missile crisis, accusing it of not doing enough and seeming to raise the idea of reprisal against Beijing.