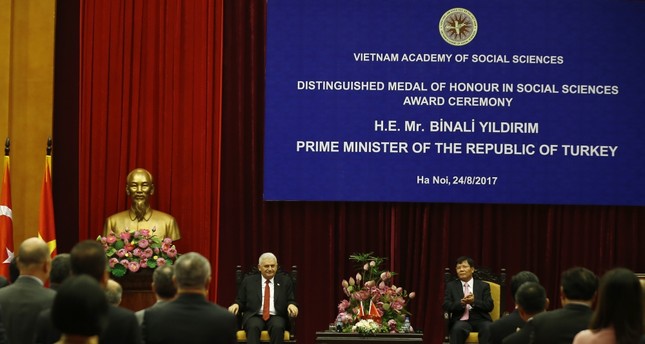 PM Yıldırım (L) attends an awards ceremony at the Vietnam Academy of Social Sciences where he was granted a distinguished medal of honor.

Ahead of returning to Turkey following his four-day visit to Singapore and Vietnam, Prime Minister Yıldırım said Turkey will sustain its strategy to increase trade and economic effectiveness in Asia

Ahead of returning home from a four-day Asia trip, Prime Minister Binali Yıldırım met with members of the media at a hotel in Vietnam yesterday.

Evaluating the outcome of his visits to Singapore and Vietnam, Yıldırım said that relations with Singapore were excellent while economic ties were improving by the day.

As for Vietnam, the prime minister said that it was a country which has grown by 6-7 percent over the last decade and wants to significantly improve trade relations with Turkey.

He added that Turkey also wants to deepen economic and business ties with Asian countries.

Earlier in the day, the prime minister attended a Vietnam-Turkey Business Forum in Hanoi where he said, "Our country will maintain its strategy of increasing trade and economic presence in Asia, particularly in the Far Eastern market."

Stating that Singapore holds an important place within the Association of Southeast Asian Nations (ASEAN), Prime Minister Yıldırım said, "We have evaluated how we can be more involved in this community. With Singapore, we have discussed and come to mutual agreements on a few sectors, including information technologies, cyber security, as well as seaport and airline sectors."

Pointing out Singapore as a gateway to Southeast Asia, Yıldırım recalled that two of Singapore's most important institutions, TEMASEK and the Singapore Investment Fund have invested in Turkey.

He added that his visit to Singapore was aimed at further improving the commercial and economic activities in line with its new generation of free trade agreement with Turkey which will come into force this October.

As for Vietnam, Yıldırım acknowledged that Vietnam as a country holds great promise in terms of its population, natural resources and human capacity.

He noted that during his visit to the country the ratification process of the agreement on reciprocal promotion and protection of investments, as well as prevention of double taxation signed with Vietnam back in 2014, was finalized.

"Turkish investors contribute to Vietnam's economy by investing over $700 million," he underlined.

He also said works on signing a free trade agreement between the two countries was in progress.

"Cooperating with a country that has high strategic importance like Vietnam and taking this cooperation further are among our priorities," he added.

Yıldırım noted that Turkey and Vietnam share a combined trade volume of $683 billion and over $1 trillion in national income with their total population of 173 million. But, the trade volume between the two countries stood at just $2 billion, way below its potential.

He noted that Turkey's export to Vietnam increased by 16 percent in the first half of 2017, while Vietnam's export to Turkey increased by 33 percent during the same period. "Although trade balance is not in favor of Turkey, it can be achieved by increasing and diversifying trade," he said. Yıldırım was the first Turkish prime minister to visit Vietnam since the two countries established diplomatic ties in 1978. Vietnam and Turkey will jointly celebrate four decades of relations next year.

Share on Facebook Share on Twitter
Previous in Economy After Turkey became a dialogue partner with ASEAN, Prime Minister... Next in Economy As the U.K. and EU are set to return to the negotiation table on Monday,...
DAILY SABAH RECOMMENDS