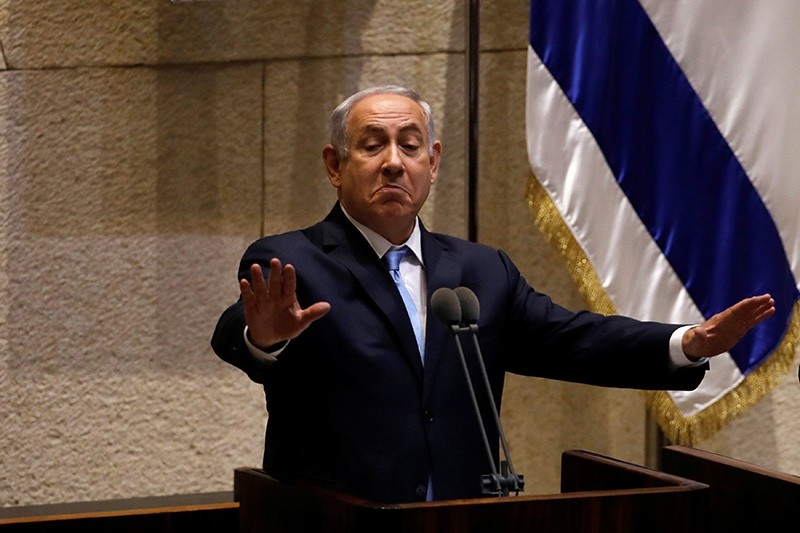 Israel's Prime Minister Benjamin Netanyahu speaks at the opening of the winter session of the Knesset, the Israeli parliament, in Jerusalem October 23, 2017. (Reuters Photo)
by Compiled from Wire Services Oct 23, 2017 12:00 am

The German government on Monday said it was ready to approve the 1.5-billion-euro (1.8-billion-dollar) sale of three submarines to Israel that had been on hold due to bribery allegations, spokesman Steffen Seibert said.

The sale of the ThyssenKrupp vessels was halted by the chancellery of Angela Merkel amid an Israeli investigation into possible wrongdoing by ThyssenKrupp's Israel representative Miki Ganor and several close associates of Prime Minister Benjamin Netanyahu.

Seibert told a government press conference Monday that "all relevant aspects" had been considered and that the sale had to go ahead due to Germany's "historical responsibility towards the state of Israel."

The 2016 deal has been under public scrutiny since it emerged that Prime Minister Benjamin Netanyahu's personal lawyer also represented ThyssenKrupp Marine System's local agent, raising concerns of a conflict of interest.

The attorney has denied wrongdoing and said he never discussed the deal with Netanyahu. Israel's justice ministry said in February that Netanyahu himself was not a suspect.

"How sad for you, that you have been staking your hopes on recycling the submarines story, but also understand that this story, too, has been sunk," he said.

Seibert said Germany would make a contribution of up to 540 million euros to help finance Israel's purchase.

Seibert said an inter-governmental memorandum of understanding approving the deal would be signed later on Monday.

"I would like to thank (German) Chancellor (Angela) Merkel and her government for this memorandum, which touches on a matter that is very important for Israel's national security," Netanyahu said in his speech.