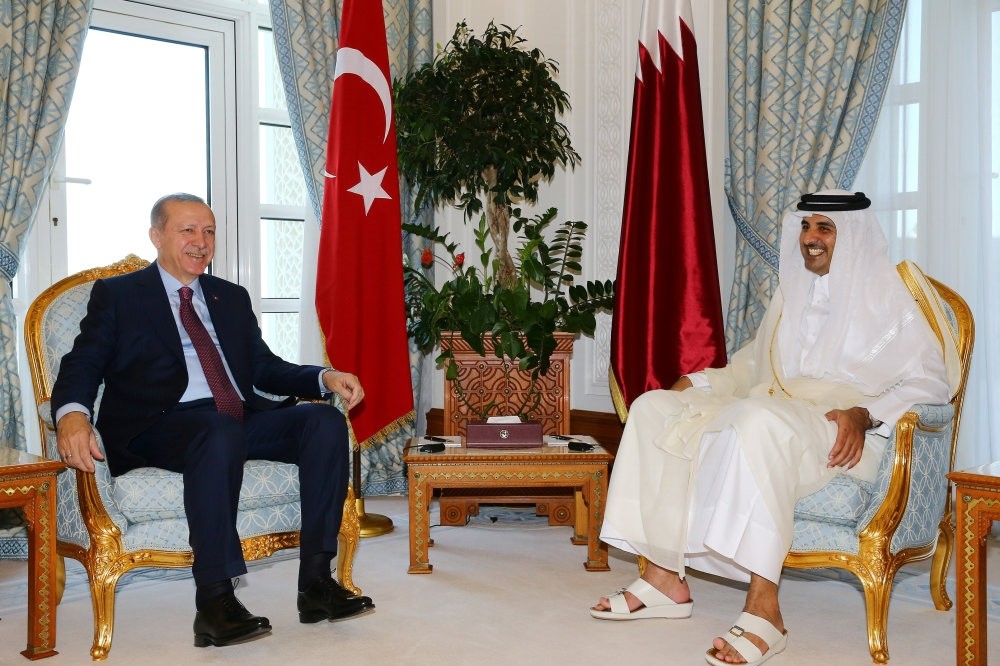 While in Qatar visit, the last stop of a three-day regional trip after Russia and Kuwait, President Erdoğan discussed economic ties between the two countries as well as regional matters with particular emphasis on the necessity for cooperation among regional countries for stability

Both leaders emphasized the importance of cooperation and solidarity among regional countries with a view to maintaining stability. Erdoğan and al-Thani exchanged views on regional and global matters in their meetings. They particularly delved into the Syrian and Iraqi crises and the diplomatic crisis between Qatar and four Gulf countries led by Saudi Arabia, which broke out in early June and remains unresolved. President Erdoğan highlighted the necessity to sustain stability in the region and said Turkey will continue its constructive intermediary role to institute stability, cooperation and solidarity among the regional countries.

President Erdoğan underscored that the $710 million bilateral trade volume recorded in 2016 is far from reflecting the potential and expressed common targets to increase the current volume.

The president noted that initiatives would be taken in defense, energy, transportation, food safety and health to boost mutual trade operations and said state officials will continue to support mutual investments.

In the aftermath of the blockade, Turkish exports to Qatar hit $165 million between June and September, a remarkable 84 percent increase compared to the same period last year. According to the Turkish Exporters Assembly (TİM), Turkey sent $65 million in exports to Qatar in August alone, 75 percent more than the same month the previous year.

According to the Ministry of Economy, Qatari investments in Turkey hit $1.5 billion this past August.

Over the years, the small Gulf nation has made a number of significant acquisitions in Turkish retail, media and finance businesses. For instance, the Qatar National Bank (QNB), the Gulf's largest lender, acquired Turkey's Finansbank for $2.94 billion in June 2016 from the bank's Greek shareholder National Bank of Greece. The same year, the Commercial Bank of Qatar, which had a 75 percent stake in ABank, bought the remaining 25 percent from Anadolu Group for $222.5 million. Moreover, Qatari investment fund Mayhoola for Investments bought shares in Turkish retail giant Boyner, while Qatar's beIN Media Group acquired Turkish satellite television provider Digitürk.

President Erdoğan also visited the base of the Turkish Armed Forces in Qatar. Turkey and Qatar have previously conducted joint military exercises in an aim to strengthen coordination and cooperation between the two countries, which are members of the anti-Daesh coalition.

Turkey's parliament fast-tracked legislation on June 7 to allow hundreds of troops to be deployed to a military base in Qatar, set up as part of an agreement signed in 2014, in a show of support for Qatar, which is also home to the biggest U.S. air base in the region.

Ankara has said it will deploy 3,000 ground troops at the base to serve as a venue for joint training exercises and to support anti-terrorism efforts.

Moreover, a signing ceremony for a number of agreements between Turkey and Qatar was held yesterday in Qatar's capital Doha with President Erdoğan and Qatari Emir Tamim bin Hamad al-Thani in attendance.

Culture and Tourism Minister Numan Kurtulmuş and Economy and Trade Minister of Qatar Sheikh Ahmad bin Jassim bin Muhammad al-Thani signed the Memorandum of Understanding on Cooperation in the Field of Tourism.

The Memorandum of Understanding on Legal and Judicial Cooperation between the two countries was signed by Justice Minister Abdülhamit Gül and Justice Minister of Qatar Hasan Lahdan Sagr al-Mohannady.

The Memorandum of Understanding in the Field of Humanitarian Aid and the Joint Declaration was signed by Foreign Minister Mevlüt Çavuşoğlu and Minister of State for Foreign Affairs of Qatar Sultan bin Saad al-Muraikhi.